To celebrate National Panto Day, Curator Cathy Haill looks at the Pantomime Dame costumes new to the display in Theatre and Performance Galleries.

Installing recent acquisitions in the galleries is always a delight, especially when you can invite people associated with them to meet the staff who have worked on them, and see them on display.This is what recently happened with three pantomime costumes newly displayed in the Theatre & Performance galleries of the Victoria & Albert Museum – a Widow Twankey costume worn by Danny La Rue in Aladdin, and two costumes worn by Nigel Ellacott and Peter Robbins as the Ugly Sisters in Cinderella. They are already proving show-stoppers, and seeing them giving pleasure to visitors is a tribute to those who designed and made them, for whom the joy of seeing them on display was not without emotion.

Pantomime is a very British tradition, despite its Italian roots. Children of all ages love its familiar stories, its audience participation, and the spectacular settings and costumes that have become an essential part of this annual Christmas treat. Like all traditions pantomime has changed over the years, and although the role of the thigh-slapping Principal Boy played by a girl has virtually disappeared, the role of the Pantomime Dame that developed during the 19th century has never been more prominent. Victorian pantomime Dames were always men in frocks, often representing the woman next door, who may have changed costume once to reflect their characters’ newly-found wealth. Today’s Dames are men in a stunning array of witty outfits, the more outrageous the better, their outlandish appearance a challenge for their designers and  performers, who sometimes wear as many as twenty-two different outfits in one show.

One of the most glamorous 20th century pantomime Dames was Danny La Rue (1927-2009), the successful and popular female impersonator who liked to call himself ‘a comic in a frock’. He brought drag out of clubs into the West End, and was the first female impersonator to appear on the Royal Variety Show. He made his West End debut at the Whitehall Theatre in the 1966 musical comedy Come Spy With Me, especially written to give him the chance to wear as many female outfits as possible, as an MI6 secret agent in disguise. In 1970 he starred in his own show at the Palace Theatre that ran for two years, and went on to become a regular star attraction in pantomime. When he saw an ornately beaded cape worn on television by the female half of the husband and wife pop stars Captain and Tennille in 1979, Danny got in touch with its maker Annie Galbraith (b.1942) to ask for similar costumes. He later said he believed in destiny: ‘I was meant to meet Annie’.

Annie was already a successful costume maker whose work at the costumiers Berman & Nathan’s from 1964 to 1970 had led to her establishing her own workshop where she made  hundreds of glamorous outfit such as those she made for nine years for Pan’s People in Top of the Pops, and Shirley Bassey.  After the first costume, Danny La Rue commissioned so many frocks from Annie that she gave up other clients to work for him entirely. Over the years she estimates that she must have made over 500 ornately beaded and sequinned dresses for him, with wigs by Richard Mawbey, headdresses by Frank Winter, shoes by Annello and David, and accessories to match. She went to London stockists Ells and Farrier or Barnet Lawson for the thousands of beads, sequins and trimmings that his dresses required, and to Miss Ruhle who had a studio on the top floor of a house in Golden Square for the finest ostrich feathers, who liked to say she stocked three qualities of feather boa: ‘standard, deluxe and Danny La Rue’! Annie became Danny La Rue’s dressmaker, dresser, travelling companion and life-long friend. As she once said: ‘I came to feel sometimes like a leaf blown along by the wind. And Dan was that wind.’

Annie recalls how the Widow Twankey costume began life as a sequinned leotard designed by Terry Parsons, made by her, and originally worn by Danny La Rue as Mother Goose at the Theatre Royal Plymouth in December 1983 when he emerged from the Pool of Beauty, with a plume of pink marabou feathers behind him. The costume became Dan’s, and when he needed a glittering costume for Aladdin at the Theatre Royal Plymouth in December 1994, to signify the fabulous wealth that Aladdin secured for his mother, Annie transformed the leotard into his ‘pagoda frock’. Tarlatan fabric was the base for the characteristic shape of the pagoda’s eaves at the shoulders and hips, and yards of glitter chiffon, intricately beaded and sequinned at Annie’s workshop in Tunbridge Wells, covered the tarlatan and made the skirt, trimmed with the pink marabou feathers. The pink feather headdress and wig he wore as Dolly Levi in Hello Dolly! at The Prince of Wales Theatre completed the outfit.

When Danny La Rue died he left all his costumes to Annie, and the museum was lucky enough to buy four of them at an auction held in 2010. Some were bought and worn by working Dames today, but this is the first to be displayed in the V&A. The pagoda costume is fabulous, the essence of Danny La Rue and the diva dresses he brought to the stage, and an accolade to Annie Galbraith’s almost thirty years of painstaking costume creation for him. But to Annie it’s all about Dan. ‘How he would have loved knowing he’s here’ she said wistfully on seeing the display.

Just a month before the death of Danny La Rue in May 2009 another seasoned pantomime performer, Peter Robbins also died, at the early age of fifty-six. Since his first appearance as an Ugly Sister in Cinderella with Nigel Ellacott at the Kenneth More Theatre, Ilford, when they found they had a huge rapport working together, Peter and Nigel  established themselves as specialist Ugly Sisters, building up an extensive wardrobe of costumes, wigs and props designed by Nigel. Peter and Nigel were hugely entertaining and professional, and by 1983 were employed by Paul Elliot as the Ugly Sisters in Cinderella. They remained as Ugly Sisters with E&B and Qdos productions of Cinderella for the next twenty-six years, performing in twenty-eight pantomimes throughout the UK, constantly reinventing their characters whilst keeping alive some of the most loved Ugly Sister routines. They followed in a tradition of other actors who had specialised as duos performing Ugly Sisters, including Burdon and Moran, the illusionists Charles Burdon and Maurice Moran, and Alvis and O’Dell – Roy Alvis and Danny O’Dell who worked as Sisters in the 1970s and 1980s.

The two Ugly Sister ballgowns were two of the costumes that Nigel most cherished of the hundreds thatl he designed for them. They wore them at the start of Act II when the Sisters make their grand entrance at the Prince’s Ball, held at the palace to find Cinderella. At this point in the pantomime the Dames are thoroughly hated by the audience, having thwarted Cinderella’s invitation to the ball and having had the most expensive and tasteless costumes made for themselves to attract the attention of the Prince. These are some of the largest and heaviest costumes they wore, and feature two party poppers hanging from Nigel’s outrageous champagne-bucket wig, which ejected streamers as he pulled the cords on his line: ‘Let’s make this party go with a bang!’ The ballgowns were made by Margaret Brice, a costume maker who worked at Berman and Nathan’s from 1956 until 1961 and who was a resident costume maker at the Kenneth More Theatre for twenty-one years. The fabric came from Borovick’s, with beads and trims from Barnet Lawson, but like Danny La Rue’s ‘pagoda dress’, elements of previous costumes were also used in their construction. The pink and blue ostrich plumes originated at the Folies Bergère in about 1950, along with the appliques on Nigel’s gown, having been purchased by Holiday on Ice in the interim. The crinoline under Nigel’s dress was acquired from Cyril Fletcher’s pantomime productions who in turn bought it from a Royal Opera House wardrobe sale. The solid fibre wigs were made by Kevin Powling and Geraldine Westley of Wig Art, and the introduction of solid wigs has made hair care a lot simpler over the years for Dames, and wig creation more extraordinary as wigs are constructed round objects from sailing ships to Swiss army knives. Their rings were made by the jewellery maker Madam Kuldana, the exotic pseudonym of Audrey Burgess from Hornchurch.

Nigel and Peter last appeared together at the Theatre Royal Nottingham in the 2008-2009 season. Nigel kept the costumes in superb condition for eight years after Peter’s death, but never performed Ugly Sister with another actor, turning his hand to solo Dame instead. In 2017 Nigel finally decided it was time to donate the costumes and his designs to the museum. It was not without a sense of loss that Nigel parted with them in the summer and signed the official gift form, but when he saw them in the galleries at the V&A in December he was happy that he and Peter could make an exhibition of themselves again for a long run as Ugly Sisters.

Along with the Nursery Rhyme quick-change outfit designed by Lotte Collett and worn by Clive Rowe as Mother Goose at the Hackney Empire in 2014, and Danny La Rue’s Widow Twankey dress, these costumes make a truly memorable display. The visits to see them by Annie Galbraith and Nigel Ellacott were no less memorable

The Pantomime Dame costume can currently be seen on display in Theatre and Performance gallery 103.  To find out more about pantomime in the V&A Collections visit Search the Collections.

Marvellous, so happy to see them on display. 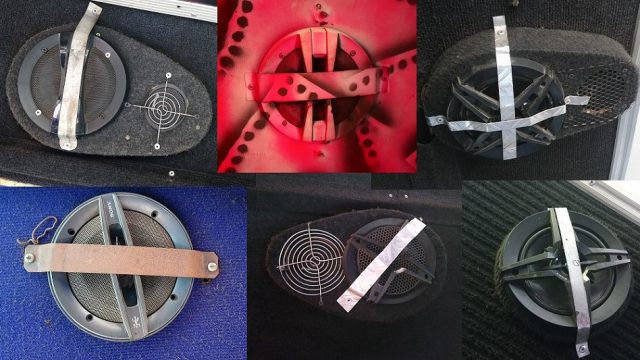