We are a month into decanting the 20th Century and Rapid Response Collecting Galleries and this week we have been busy moving some of our more complicated objects.

A decant cannot run smoothly without the collaborative efforts of various departments sharing their knowledge and expertise. Ahead of the move, curators and conservators methodically assessed the condition of every object in the galleries. Once they identified vulnerable elements, they consulted with technical services – our object handlers – to determine the safest way to move every object. Many pieces were stable enough to be transported by trolley, but others were particularly complicated to handle, such as this chest of drawers by Dutch designer Tejo Remy. Called ‘You Can’t Lay Down You Memory’ it consists of 21 drawer compartments piled on top of each other, held in place with a ratchet strap. Each drawer was salvaged from an existing piece of furniture and inserted into maple cases.

The Technical Services team assessed that it would be impossible to move the chest of drawers without compromising its perfect balance. Moving it would cause drawers to rattle and, at worse, fall off. Hence, we made a decision to completely dismantle the object. The perilous exercise required two technicians to stand either side of the chest of drawers. Whilst ensuring the strap remained tense and tight enough to support the construction, they stabilised the lower drawers with their knees. Nigel Bamforth, the furniture conservator in charge of the project, carefully took out drawers and housings one by one, allowing Philip James and Benjamin Brown, the technicians, to readjust their grip after each piece was removed.

As parts were removed, the team laid the bottom drawers flat to maintain the balance and weight distribution. 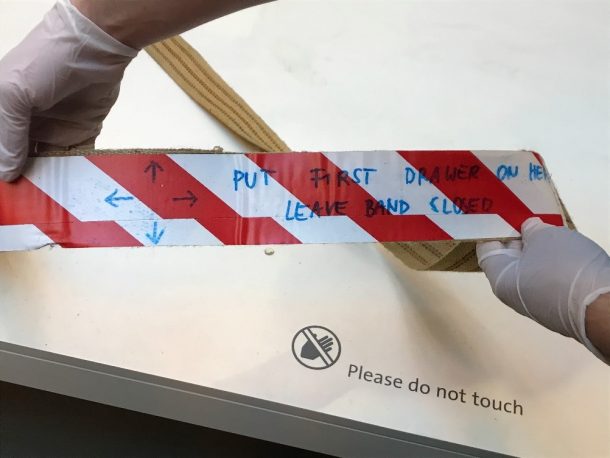 When nothing was left but the strap, we discovered a rarely seen part of the object: a piece of tape, inscribed with mounting instructions.

The 43 different parts – the drawers, their housings and the strap – were then piled up on trolleys, carefully separated by plastazote sheets to avoid damaging their surface while being transported.

The dismantled chest of drawers is now off to our furniture conservation studio, where it will be cleaned and reassembled. In order to complete this complex jigsaw puzzle, we had to carefully document its deinstallation, through pictures and notes. These are preciously saved, as they will inform the future work of curators, handlers and conservators.

This chest of drawers is one of the few decanted objects that will return to the galleries when they reopen in June 2020. They will be brought to light in a new way, amongst displays which will position design as a means for understanding the way we live together, and explore how designed things prompt us to ask questions of our past and, present and future.