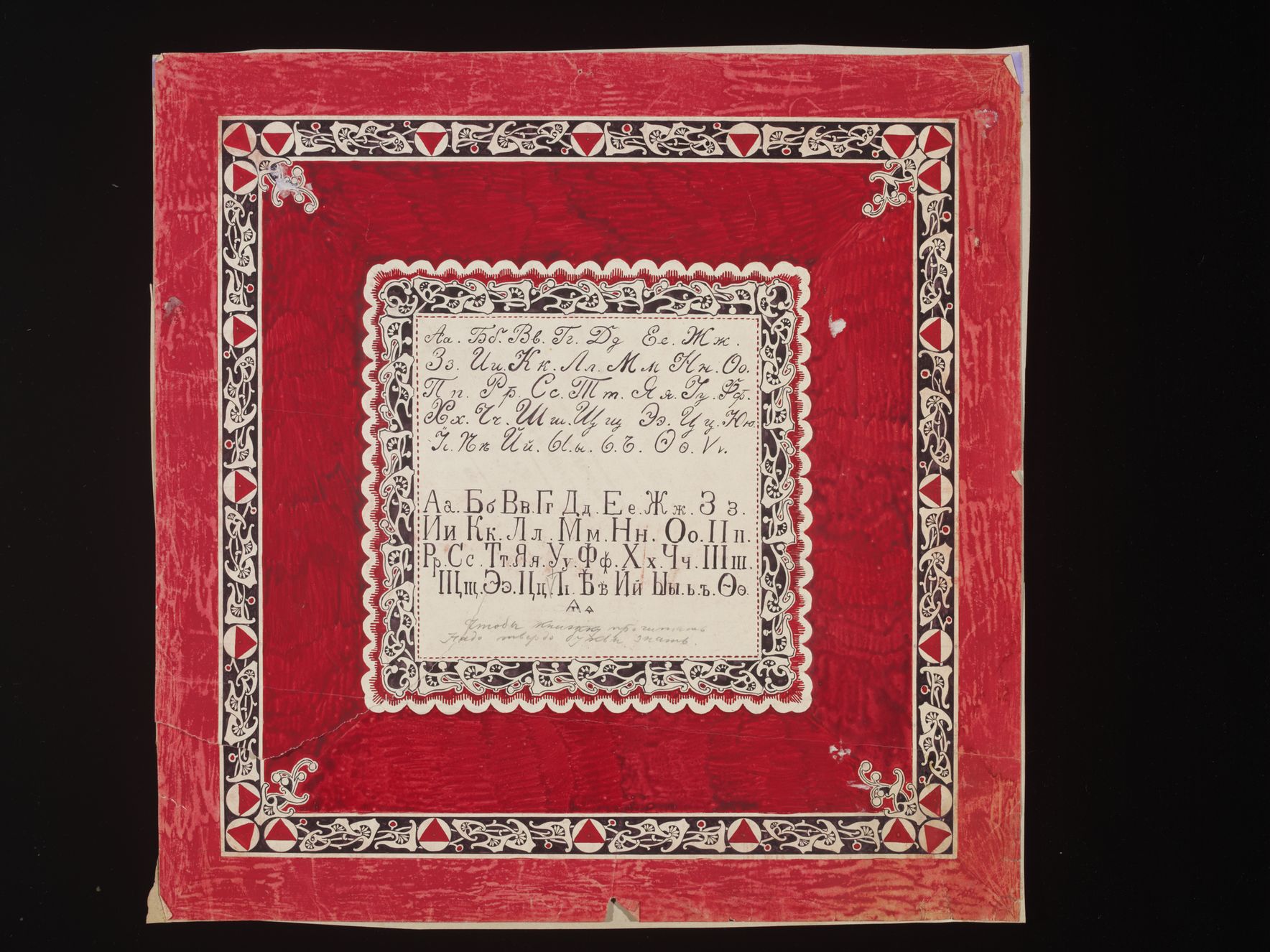 I’ve been studying Russian for a few years but still need all the help I can get if I am to master this beautiful but complex language. Recently I was delighted to find in the V&A’s collection a set of three designs for educational handkerchiefs, made by the Prokhorovskaia Trekhgornia Manufaktura texile firm in Moscow in 1903. This firm had an international reputation for high quality work. These three designs are for charming and useful keepsakes that any student would love.

This handkerchief design shows the two forms of the Russian alphabet.

This design has a nice clear set of alphabets which did help when I was trying to read the scribbly handwritten notes for the text that would be added to the designs. Underneath this one is: ‘In order to read books you need to know your letters well’.

This design features a multiplication table, with some images of a teacher and pupils.

This should be a useful one for me as I find Russian numbers very challenging. It is not the mathematics, however, but the grammar of numbers that I find confusing. Numbers are complicated in Russian in lots of different ways. Firstly, the numbers 2 to 4 are singular and not plural in Russian. So really you say ‘two book’, not ‘two books’. It is only from 5 upwards that are really plural. And that goes for 21 to 24 too, and 31 to 34, and so on.

Numbers are a bit like adjectives, which decline in Russian, so they have to be in the right case to match their place in the sentence. Therefore ‘two books’ [две книги] is different to ‘with two books’ [с двумя книгами], and different again to ‘in two books’ [в двух книгах]. You also have to do this for years, so when saying ‘2019’ or ‘in 2019’ you have to make sure you have the correct form.

On top of that, when in English we put commas between large numbers such as 1,000,000, the Russians put full stops. A Russian million therefore looks like 1.000.000. Commas are used, but for decimal fractions so a Russian 0.5 looks like 0,5.

Maybe a handkerchief covering all of this would help me with my grasp of Russian numbers!

The third handkerchief design features images of young students: a boy with his chalk board, a boy writing and, interestingly, a girl reading. In Russia at this time many girls could not attend school but sometimes receive a basic education at home.

Above the images, the encouraging text tell us to go school and work hard to learn reading, writing and grammar. The lower one has the appealing notion: “If I know how to write letters well and without mistakes I will be able to write my mother a letter.”

In late 19th century Russia many children did not attend school. The census of 1897 shows a literacy rate of about 20% – this is much lower than in Western Europe at the time (in the UK, for example, a parliamentary Act of 1870 made primary education compulsory). The Russian writer Leo Tolstoy famously set up a school to teach the children on his estate to read (I have a blog of some of his books for children here). After the 1905 revolution the new Russian parliament called for wider education to improve the low state of literacy, but little action was taken as other priorities took over. The Bolsheviks were also keen on education when they came to power after the 1917 revolution. They hoped that educating women and the lower classes would create an invigorated new communist population. Literacy rates did rise during the early 20th century but suffered under the increasing hardships of civil war and Stalin’s totalitarian regime of the 1930s.

The textiles firm that made our handkerchiefs also fared badly in this environment. The government wanted all aspects of society to support and demonstrate Communist ideology. The factory, along with many other businesses, was found lacking and was forced to close in the 1930s.

I will still be inspired in my studies by these designs, however, so the desire of the factory to assist education will go on.

I knew that Russian is difficult to learn, but that is so much difficult. I learned Chinese, and it seems to me more difficult than any languages since this is an entirely different letter – hieroglyphs. And learning to read them is very difficult. But I will tell you that you do not give up, it is very great that you learn a foreign language. I advise you to read my dissertation, using thesis essayontime.com.au/thesis-writing, in which I tell the impact of the study of foreign languages in humans. For me, this was an exciting study that will show you what you need to know as a minimum of 5 foreign languages.

I didn’t have any expectations concerning that title, but the more I was astonished. The author did a great job. I spent a few minutes reading and checking the facts. Everything is very clear and understandable. I like posts that fill in your knowledge gaps. This one is of the sort.