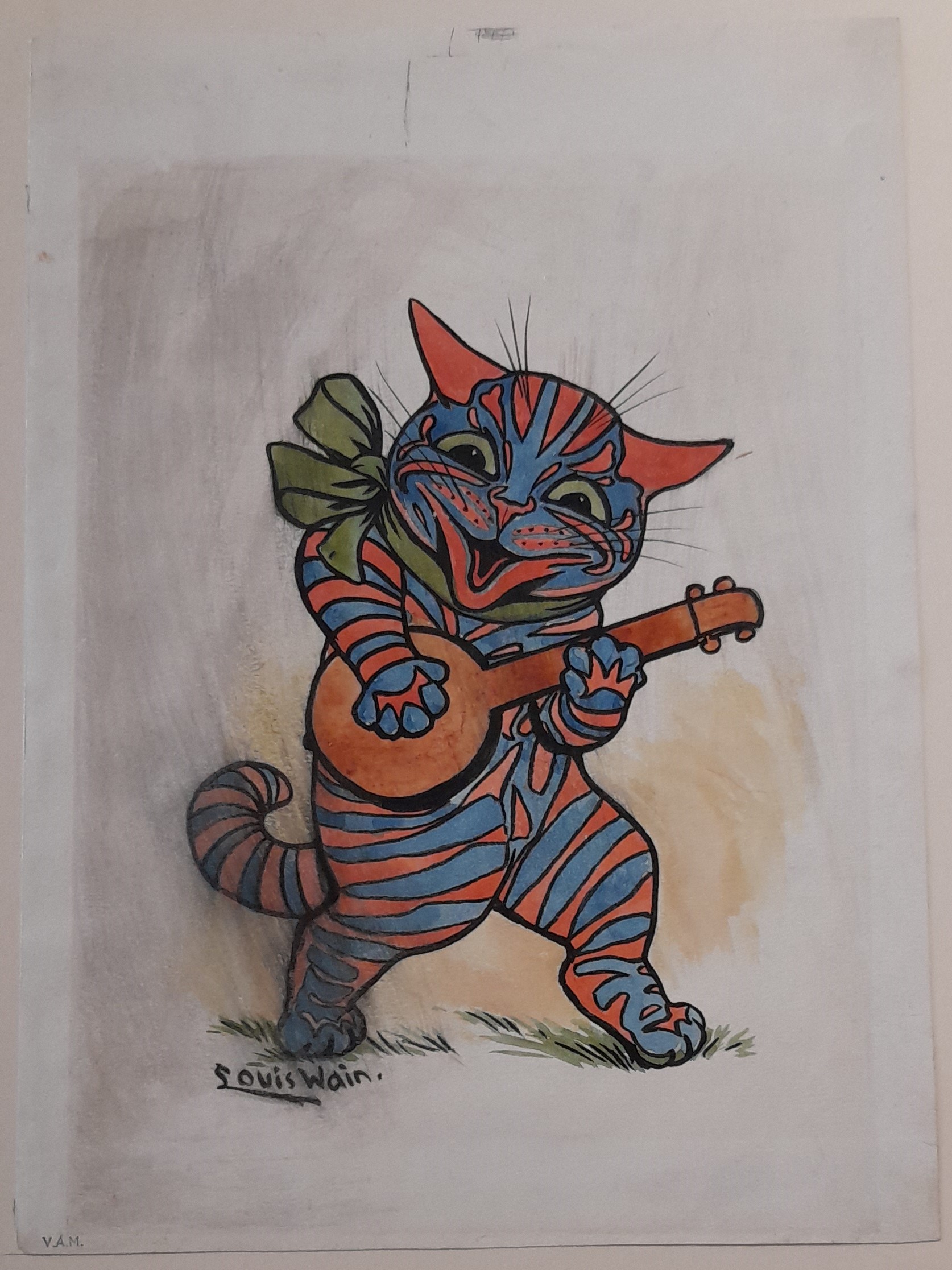 I work in the V&A’s Department of Art, Architecture, Photography and Design, and it is full of cat lovers. Talk can quickly turn from photographs to felines, from paintings to pussycats. Stumbling across a single image of a cat in the collection is always a delight, but if you want a large quantity of kitties, then delve in to our boxes of illustrations by artist Louis Wain (1860 – 1939). Cats were Louis Wain’s main fascination and inspiration throughout most of his life as can be seen in the new film about him that opened in cinemas this month.

Louis Wain initially drew many different kinds of animals, but was inspired to concentrate on cats by making a close study of his own black and white cat, Peter the Great. According to Wain, Peter was the “principal model and the pioneer of my success”. The figure of Peter appears in several works we have in the collection from a series depicting a cat’s nine lives. In life number three a cat modelled on Peter is poisoned by bad milk. In the the final one of the series the cat has run out of lives and is in cat heaven, where there is an abundance of food and other comforts. These works are humorous, even though Wain, like many living in the 19th century, had a life marred by the early deaths of family members, including his wife after only a few years of marriage.

The V&A has several works given by Sir William Ingram in 1914. Ingram ran the ‘The Illustrated London News’ and gave Wain regular illustration work for the paper from the mid 1880s. Louis Wain recalls Ingram, “… to whose kindly interest I owe the foundation of my success…”. These drawings show Wain’s skill at capturing the physicality of cats, their movements and features. Among them is A Kitten’s Christmas Party, which appeared in a December 1886 issue of the Illustrated London News and was sensationally popular, boosting Wain’s reputation and making his designs more desirable.

By the late 1880s, Wain had begun to anthropomorphise the cats, creating humorous scenes of felines in human clothes or participating in activities like building sand castles at the beach. This became his recognisable style, and made cats seem friendly and sympathetic.

At this time cats were becoming more accepted as pampered pets, rather than just as useful rodent killers. Louis Wain was chairman of the National Cat Club who celebrated different breeds of cats through competitions and shows.

As an artist, Louis Wain was both prolific and popular. By 1900 he would turn out many hundred works a year for a variety of projects, including illustrations for story books, note paper, posts cards and colouring books.

Despite this apparent success Louis Wain never made his fortune and was often short of money. He would sometimes give away the proceeds from his works to charities set up to help stray cats.

Wain’s life became more unfortunate as his mental health began to suffer, and he was committed to an asylum in 1924. He remained hospitalised until his death in 1939, but continued to draw cats throughout this period. Links have been made between Wain’s more outlandishly coloured and patterned works and this later mentally unsettled period of his life, but with many of his drawings undated this assumption has been questioned, and remains inconclusive.

Louis Wain spent his life fascinated with felines. As cat lovers from my department, and around the world, know: Louis Wain was right to recognise that cats are always a work of art.

P.S: Here is my cat helping me write this blog post.

Love this blog & lovely to hear more about Louis Wain, thank you to you & to Kirby!

Very charming! Thanks from a cat lover.