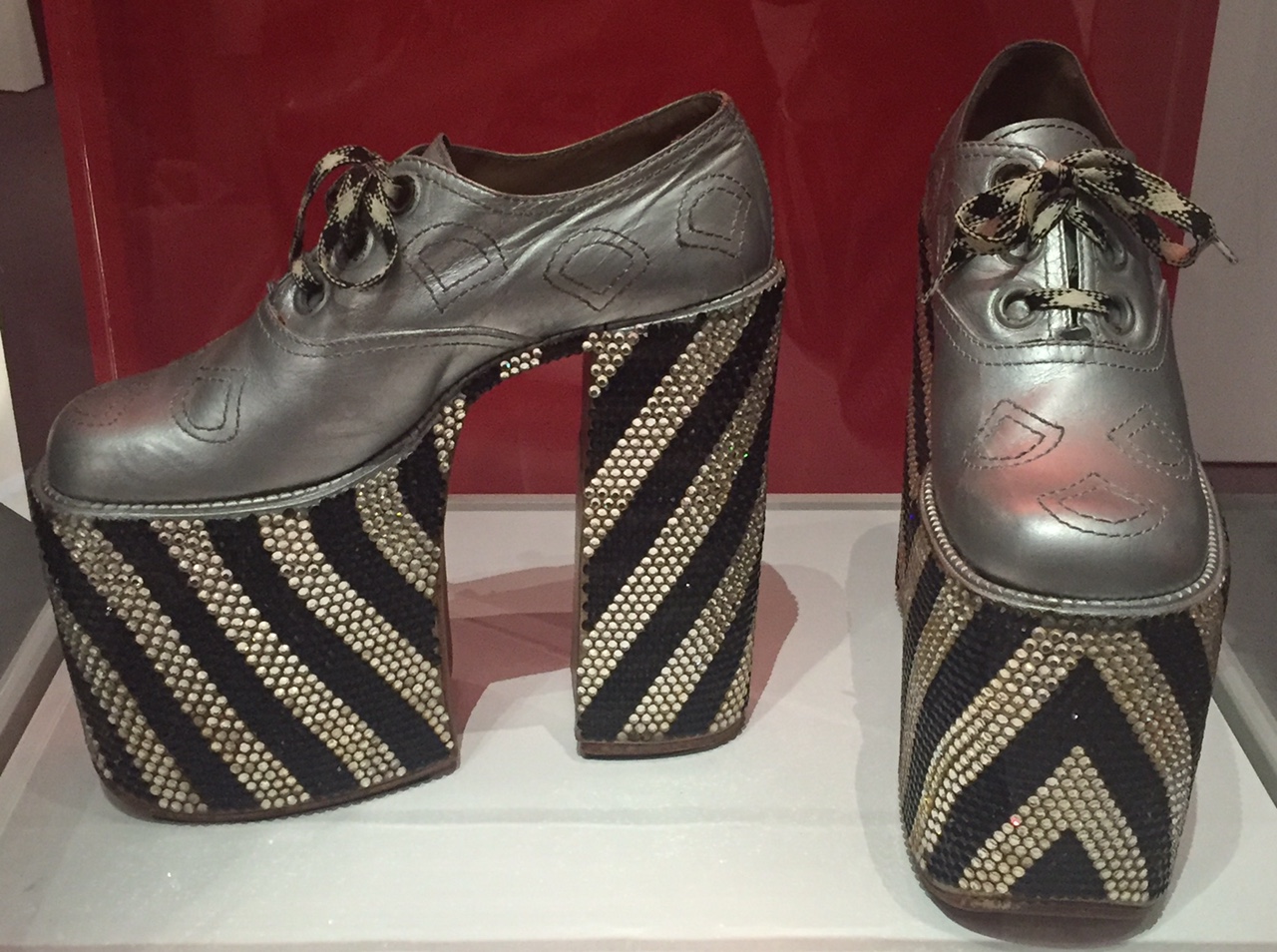 A review of ‘Standing tall: The curious history of men in heels’ at the Bata Shoe Museum, Toronto.

Who would’ve thought that a few inches could be so significant, but in the case of men’s heels it appears that size really does matter. ‘Standing tall: The curious history of men in heels’ is a thought-provoking exhibition at the Bata Shoe Museum, which explores how  throughout history  the height of a man’s  heel has stood for so much more than personal taste and comfort. The heel can be representative of the wearer’s social status, political affiliations, as well as their  morality,  gender,  sexuality and even manhood!

The Bata Shoe Museum in Toronto has a great track record of devising exciting and challenging social narratives that best utilises their formidable footwear collection. So I had high expectations for  ‘Standing tall’  and it didn’t disappoint. Despite its diminutive size, this exhibition delivers a well-presented, in-depth and cleverly crafted narrative. Its central focus is on European and North American fashion spanning the last 400 years, and it follows a chronological approach across the following themes: political, moral, functional, as well as gender and sexuality.

The exhibition’s layout utilises every aspect of the space. Set in one rectangular room with displays running along the sides and along the middle, the arrangement allows for some playful juxtapositions with 17th-century power heels crossing paths with glam rock’s platforms. Objects are sensitively lit, but where possible spot lights and backlit images are used to achieve a heightened sense of drama. Panels, labels and the audio guide successfully support the objects. Their distinctive motifs and colour helped to visually unify sections and provide useful sign posting to objects.

At the exhibition entrance a film introduces the exhibition’s subject with a playful montage of clips from ‘Saturday Night Fever’, ‘Pathé’ newsreels and ‘The Lone Ranger’. The introduction panel (in the shape of a heel) provides the historic context, which is illustrated with exquisite examples of 17th-century Turkish (fig.2) , Persian (fig.3) and European men’s heels. This section explores the adoption of Turkish, Persian and Asian styles into European footwear. From here the focus shifts onto Western European and later North American footwear. The exhibition examines the political privilege associated with royal families, their courts and their forms of clothing. The narrative is punctuated with examples of 17th-century jackboots, 18th-century English woven silk mules and stacked leather ‘peony heels’. All reinforcing the link between privilege and power dressing.

The next section explores the interrelationship between heel height and moral values and how the Pope considered men’s heels as objects of ego. This is accompanied by an eye-catching and somewhat contrary pair of crimson red silk shoes with gold tinsel embroidery with an appropriately modest kitten heel, supposedly worn by a Pope in 18th century (fig.4).

Alongside the immoral associations, higher heeled men were also seen as effeminate and frivolous. The Age of Enlightenment further increased divisions between the genders and clothing came to reflect this demarcation. Patterns, feathers, trimmings, accessories and heels all became considered effeminate and were subsequently considered unsuitable for men of action and heels were relegated to the sphere of feminine fashion.

The central section of the exhibition follows North America’s love affair with the heeled boot. The images and references of rugged individualism in connection to the pursuits of cowboys are reinforced with a bullet-impregnated heel and some well-worn riding boots. However there is a joyful juxtaposition between the ruggedness of the North American frontier cowboys with the images of technicolored macho Americana. This is further explored in the audio-guide. The narrative skillfully exposes the contrast between the historical and modern day readings of these cowboy images and embroidered cowboy boots (fig.5).

The ‘Peacocks and Dandies’ section explores the exhibitionist appeal of heels for men across the ages with 19th-century boots with highly decorative nail worked soles and The Beatles’ 1960s stacked heeled Chelsea boots. The rebellious spirit of the ’70s is immortalised in the exaggerated chunky form and height of the platform heel. Worn by rock stars the platform heel was divorced from earlier and later effeminate associations and instead was seen as a vehicle for ‘proclaiming masculinity’. Men as diverse as movie stars to accountants adopted the chunky platforms and there are some stellar Glam Rock plaforms on display, including a silver five inch high pair worn by singer, Elton John (fig.1).

The last section ‘Fear of heights’  explores the sexual ambiguity of men in heels with fantastic exhibits of red patent leather thigh high boots and stiletto heels. Citing examples such as President Sarkozy’s 2010 heels and WSWS’s lifts/shoe inserts, the narrative examines how extending your height comes with associations of sexual short-comings.

This is the first of three reviews of exhibitions which I saw during my exhibition research trip to Canada. The trip was supported by the Assistant Curator Training Fund and the V&A Museum of Childhood.

When you go for a party or something like that most people facing this problem. May be they were Short in height. But they can’t pretend to be short among others. For that they were choosing the high heel shoes to make up their height. They must careful with the size in shoes before comfortable walk.

Cleaning is the essential part of life, here you share information about shoe cleaning, that is very important and helpful. Thank you!

Thanks for sharing this useful information about the shoes