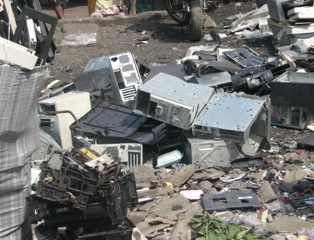 I never wanted to get a smartphone and was happy with my green-screened Nokia (it made calls, sent texts, and had the original Snake game on it). Until I felt last year that I should make an artwork that engaged with an omnipresent current technology. I decided to make a smartphone app that highlights the blurring of the boundaries between art and erotica on the Internet and in smart technologies. I won’t go into detail about this piece (it’s here), but the ironic consequence of this critically intended project was that I have since been using my smartphone every day, throughout the day, to do all sorts of mundane things from emailing to organising my travels and buying books.

The device is so handy and it gives me such convenient access to data that I am hardly ever concerned with its materialness during these activities; I experience the phone as a window to a world of intangible social interaction and information. And like a proper window I am likely not to become much aware of the window itself until it gets dirty or becomes damaged. But such stage of material decay is increasingly unlikely to be part of the consumer experience of everyday technologies like my smartphone: I will be offered a new phone within two years (or less) and if I nevertheless choose to hold on to my current model, software developments are likely to make me realise it’s ‘too slow’ in the foreseeable future. So I probably will stop using it before it shows proper signs of material decay. Nevertheless, my smartphone, along with the numerous other electronic consumer devices that fill my life, is still a material object; an object that has been made by people, using natural resources, and which will eventually become – only partially recyclable – waste, much of which is still exported to countries in West Africa and Asia, where it will eventually largely end up in landfills.

I was satisfied with my old Nokia and felt that I was able to function well in society (at least in terms of my access to communication technologies), so I think it is fair to say that I really didn’t have a strong need for the smartphone without which I now pretty much feel I cannot leave home anymore. Instead, my incentives to obtain and use the device are primarily based on my personal assessment of its conveniences versus its disadvantages. Without adequate experience of the device’s material aspects – which forecloses an engagement with its dimension of exploitative labour conditions and expenditure of resources – my personal advantages are unlikely to ever be outweighed. (Re-)gaining a connection to the materialness of the devices we increasingly tend to take for granted in everyday life might shift our (post-industrial, global Northern) desire away from a blind pursuit of ever more technologically advanced consumer technologies, without consideration of its cost beyond the small personal expense in terms of money.

It is this notion of regaining an experiential connection with consumer electronics’ materialness that is central to this Sunday’s event at the V&A, as part of the Inside Out Festival. I will spend the day in the Museum’s Art Studio, together with three other artists – Paul Granjon, Jonathan Kemp, and Madaleine Trigg – and a pile of electronic waste sourced from different institutions and households in London. Throughout the day, each artist will experiment with different mechanical and chemical processes to develop a performative engagement with these rejects of technological consumer culture. In the end of the day, at 4pm, there will be round table led by cultural theorists Neil Maycroft and Toby Miller, in which the artists present and discuss their work.

This day-long public event is part of the art-science research network Bodies of Planned Obsolescence: Digital performance and the global politics of electronic waste, which is funded by the Arts and Humanities Research Council and the Royal Central School of Speech and Drama. The interest of the network is to find ways to engage the material aspects of electronic devices from all sorts of angles: ecological, social, technological etc. Over the course of a year, a group of artists, cultural theorists and scientists from the UK (a country that exports a lot of e-waste), Nigeria and China (countries that import e-waste) will explore and exchange different ways to engage electronic waste.

I think your work is really good. I’m also interested in Bodies of Planned Obsolescence and I’ve been added to the mailing list. My current work is based on the themes of technology, children and electronic waste. Please do take a look: http://www.marioncheung-artist.com/lostconnections
Thanks,
Marion

The amount of electronic waste from smartphones and other devices in the world today is massive, More effort needs to be put in to cleaning up this world not flooding it with old mobile phones and last years TV model.

Dear Alex Flowers,
I wrote this text. Could you please make sure that it is attributed correctly?