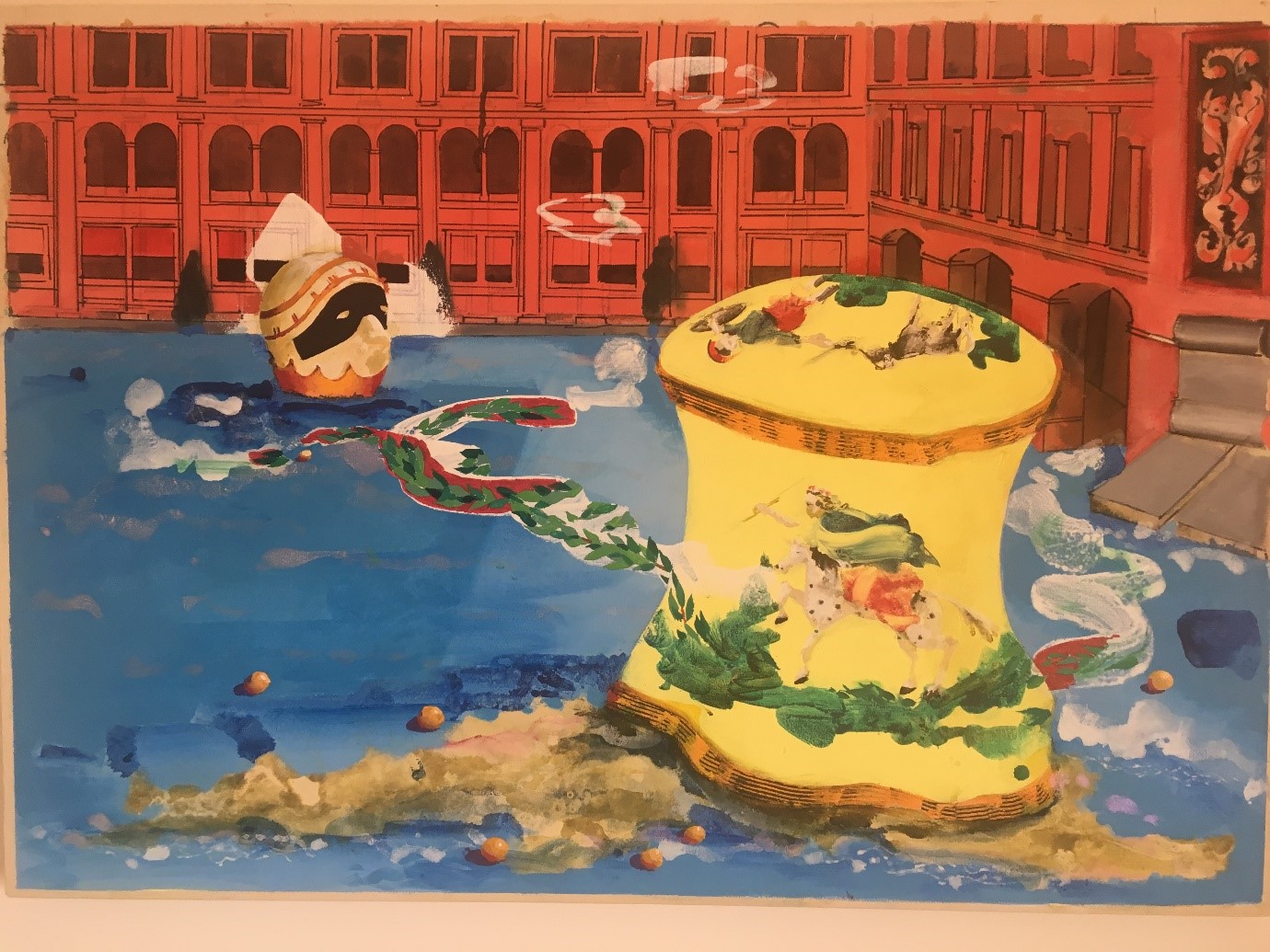 A Chelsea porcelain masquerade snuffbox with the French inscription Je te connais beau masque (‘I recognize your handsome disguise’) glides out of the Rosalinde and Arthur Gilbert Galleries into the V&A Madjeski Garden to enjoy the summer sunshine and refreshing pool. This mid-18th century Chelsea box takes a turn with an exceptionally rare German snuffbox made of tin-glazed earthenware. Very few of these were made as the heaviness of the body, the low status of earthenware and the fragility of the glaze, which chipped easily, made them ill-suited to the fashionable role of a snuffbox in gentleman’s pocket. Both are captured in colourful fantasy by artist Stephen Farthing whom I met this Spring at the opening of his Chichester exhibition ‘Museums of the World’.  In that show, as Charles Saumarez Smith explained, Farthing ‘explored the complex relationship between works of art and their setting – the way work is displayed and how the systems of display, including the lighting, the seating, and the display cabinets condition the way works of art are viewed.’

I invited Stephen to visit the Rosalinde and Arthur Gilbert Galleries at the V&A; three days later I joined Stephen in those galleries.

He then sent me images of two paintings inspired by his visit. He wrote ‘The images pretty much speak for themselves – the main difference from the rest of the series in Chichester is that the interior space is now broken by a view through a window-allowing the action within the exhibits to spill over into a courtyard below’.

Farthing plays on the contrasting scale of snuffbox and museum courtyard. This whimsical interpretation recalls Swiftian satire. In Gulliver’s Travels, Jonathan Swift has some of the diminutive inhabitants of Lilliput search Gulliver’s left coat pocket where they find ‘a huge silver chest’. The tiny search brigade is unable to lift the lid and calls for assistance. Achoo!  Achoo…. Achoo…

One of us stepping into it, found himself up to the mid leg in a sort of dust, some part whereof flying up to our faces set us both a sneezing for several times together … In the right coat-pocket of the great man-mountain after the strictest search, we found only one great piece of course-cloth, large enough to be a foot-cloth for your majesty’s chief room of state.

It was a faux pas to sneeze! A snuff handkerchief was an essential gentleman’s accessory then as now – perhaps Farthing’s painting should be reproduced as such for use in this current hay fever season…

Moon dust is the substance of the jewel depicted to the left of the micromosaic dog-box. A contemporary confection by Silvia Weidenbach, jeweller, goldsmith and Gilbert artist in V&A residence, 2017–18. Currently displayed in the Rosalinde and Arthur Gilbert Galleries, and now joined by other confections in a themed ‘Garden of Delights’ combining gold-set gems with computer-aided armatures, inspired by the treasure and trinkets with which her creations are surrounded.

Silvia Weidenbach’s work is a compelling amalgam of the old, the new and the wow. But most of all her pieces are stunning, sometimes quietly so, often quite loudly so. They have to be seen, touched and worn to be fully appreciated. This is craftsmanship, imagination and artistry at play – Guy Salter, Chairman of London Craft Week.

From 9 July visitors to the V&A Gilbert Galleries can view Silvia’s latest creation, a gold box coated in ‘moon dust’ and set with 800 diamonds, blue, pink, green and white. This sophisticated organic grenouille-like creature is both tactile and seemingly edible; an adult toy frog.

In size and complexity the frog box is a worthy companion to the Frederick the Great Boxes; its timeless form apparently inspired by 17th-century silver auricular vessels and gold rococo gem-set snuffboxes. The moon dust does not take colour kindly, so the resulting whiteness provides an excellent foil for the gold and precious stones. An appropriate wedding gift perhaps? As the latest acquisition for the Gilbert Collection it forms a creative partner to the celebrated Frederick the Great boxes displayed at its feet.

Like Silvia Weidenbach, Stephen Farthing has developed a postmodernist relationship with history. In Paris, he painted an interpretation of Hyacinthe Rigaud‘s portrait of the young Louis XV that as a student won him a prize at the John Moores’ Exhibition in Liverpool.

One of Farthing’s fantasies has made it into the 250th Royal Academy Summer Exhibition – this features a bonbonnière (box for sweets) set with hardstones by Johann Christian Neuber (1736–1808) with a micromosaic of a white dog (a butterfly on the base), both mosaics attributed to Italian master Giacomo Raffaelli (active 1753–1856).