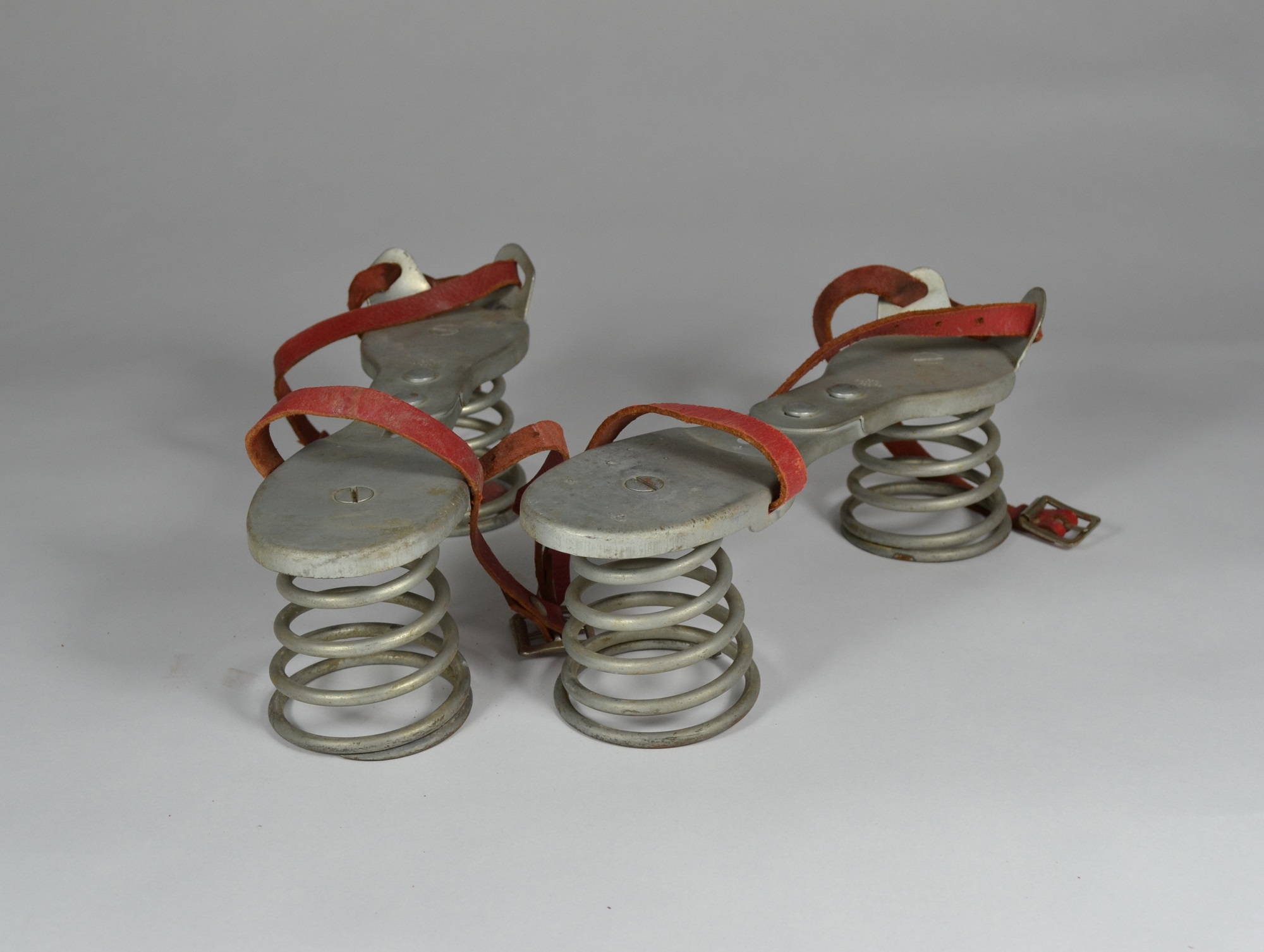 For regular readers of the V&A blog, this post could appear like a deliberate follow-on from our last space-themed bulletin. I assure you all, this is merely a coincidence and we at the MoC have not suddenly gone mad for all things cosmic. That said, we do have a very good collection of space toys, ranging from tinplate ‘man-made satellites’ to a Dan Dare glove puppet, then onward to our huge holdings of Star Wars toys from the 1970s up to the present day, as well as hundreds of other items from across the decades.

These are a pair of so-called ‘moon-shoes’, a fun toy in the spirit of the roller skate, which enjoyed popularity in the late-1950s and 1960s during the Space Race between the USA and USSR. They are metal overshoes, each with two springs fastened to their bottoms with steel bolts. The idea was that bouncing along on your Moon Shoes would emulate the feeling of walking on the surface of the moon. Quite how anyone knew what the feeling was is anyone’s guess, as mankind of course did not actually set foot on the lunar surface until the summer of 1969.

Jumping shoes similar to these might have been around since the 1920s, the model which were possibly first-produced were the ‘Kangru-Springshu’, which from their name it seems they were developed more in a marsupial than a Martian spirit. Part of their resurgence, then, will have been down to an exercise in rebranding, swapping the kangaroo for the cosmonaut. Some astronauts and cosmonauts became international celebrities, faces of inspiration and approved role models, so being able in some way to (allegedly) experience the new sensations felt by these pioneering men and women would have seemed appealing.

This particular pair were purchased by the donor at a sale on the Isle of Wight, we sadly don’t know anything more about them. They are fairly generic in design, although lacking a baseplate on the bottoms of the springs which seems to have been common to moon shoes. We have not been able to successfully identify the manufacturer, so if anyone knows anything about these shoes, please do get in touch via the comments form below, or via email to moccollections@vam.ac.uk

These shoes can be seen in our Costume, Play and Learn Gallery, upstairs in the MoC.

I had a pair exactly the same as these which I got from a jumble sale in the 1970s, they didn’t have a base plate, I was able to do my paper round in about half the time wearing them.

I bought a pair sometime between 1967 and 69 I think. I thought they were sold under the name of ‘Jumping Jacks’. I believe I ordered them through an advert in The Eagle or The Ranger comics.
Fair play to Paul Mitchell with the paper round. For myself however, I have to say not only did they fail to launch me on my intended career as a masked crime fighter, they probably made me slower of locomotion than without.

I saw a pair that look exactly like these in a vintage pop up shop in Brixton (Quirky Dovetail, Acre Lane) just the other day. All silver/grey metal, adjustable base, with red leather straps. They didn’t have a base plate either, so perhaps they were designed to be used without? No date or name brand on them, so no other clues to add.

I remember my parents buying me a pair of Jumping Jacks one Christmas,exactly like these. I thought being pretty good at roller skating these would be a doddle,but no lol! Hats off to Paul Mitchell.

I also had a pair of these given to me as a Christmas present from my mother,was most disappointing that I couldn’t launch myself very high …then I sprained my ankle…wasnt a great fan of them after that..