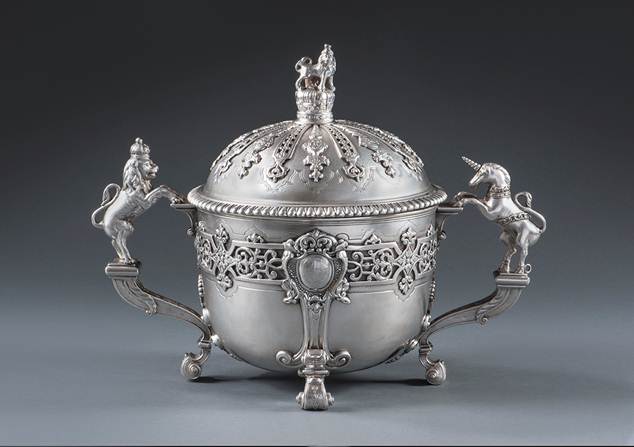 Visitors to Goodwood House this summer will be surprised to see in the Card Room, nestling amongst the 3rd Duke of Richmond’s collection of Sèvres porcelain, a spectacular silver two handled bowl and cover, framed by Royal heraldic supporters, a rearing lion and unicorn, the cover crowned with the Royal heraldic crest, a standing lion.

Ordered by the Royal Jewel House, 160 ounces of silver were raised, cast and chased into this sophisticated form in the London workshop of Huguenot goldsmith Edward Feline in 1731. This remarkable silver vessel was presented by King George II, godfather to Emily Lennox, the infant second daughter of the 2nd Duke of Richmond, who was baptized in October 1731 at St Margaret’s Westminster, the parish church nearest her London home, Richmond House, Whitehall.

The Duke of Richmond was Aide-de-Camp to the King, was a Lord of the Bedchamber, and became Master of the Horse in 1735. The Duke maintained a menagerie at Goodwood, for the delight and education of his family, so the silver lions reminded Emily of the real lion at home in the park. The baby was named after her godmother, the Princess Amelia, George II’s second daughter. Perhaps Princess Amelia discussed with her father the design of the Christening gift.

Emily evidently cherished her royal present and took it with her to Ireland when she married James, 20th Earl of Kildare, later Duke of Leinster and lived in Dublin at Leinster House and at Carton, County Maynooth. Perhaps the bowl was used at the baptism of their own nineteen children in Ireland. It descended in the Kildare family and acquired an Irish silver liner in 1856 suggesting that it was later used on the dining table for serving soup.

Sold by the family at auction in London in 1984, it was purchased earlier this year by the Victoria and Albert Museum on behalf of the Arthur and Rosalinde Gilbert Collection at the prestigious international art fair in Maastricht. It will be shown in Highlights of the Gilbert Collection in the V&A’s Whiteley Silver Galleries from November. Edward Feline was my maternal grandfather’s ancestor so I am particularly proud that his masterpiece has joined the national collection of silver in South Kensington. The Gilbert Collection willingly lends its treasures for display in their original context so that spectacular silver can be seen by the widest possible audiences. Might this royal Christening gift inspire one of our talented contemporary craftsmen to create a new Christening gift in silver for future royal use?

Interested in your article about the Royal Christening gft made for George 2nd by Edward Feline as he is also my ancestor through my paternal grandfather.

I too am a descendant of Edward Feline, and I am also pleased to see the article. I would be happy to hear from my distant relatives, if you are interested in comparing ancestry notes.