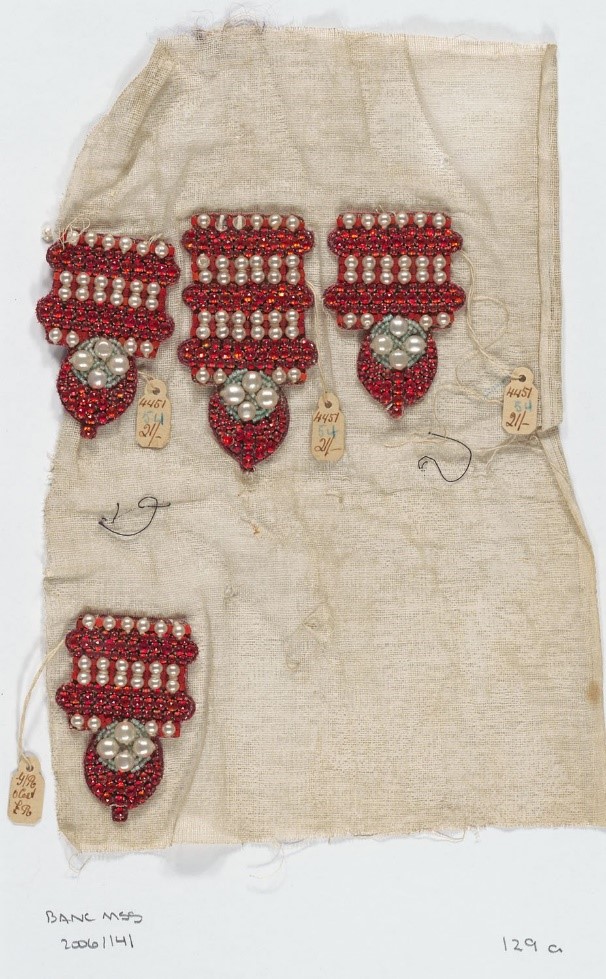 Sometimes even with our combined efforts, the V&A’s curatorial team can only get marginally closer to solving the mysteries posed by even the most intriguing pieces. This is very much the case with four petite ornaments made of vibrant red resin, a light faux turquoise and faux pearls. The all have the same width of 5cm, but different lengths, which implies that they might have been cut from longer bands. You might wonder why fashion items find their way in the Gilbert Gems blog, especially because the red beads are resin rather than rubies. The reason for this is very simple: the bands were discovered between the pages of a scrapbook compiled by London fashion designer Rosalinde Gilbert (1913-1995) during the 1940s.

We are sure that this is the period when they were made and believe they might be belt buckles or trimmings that would have been applied as horizontal ornaments to dresses. Even though we have yet to find comparable pieces, those small objects, sewn onto a piece of ragged fabric offer an absolutely fascinating glimpse into the lives and loves of the young Gilberts and their London-based fashion business during and after the Blitz. Many of their designs were for export only, as strict rationing made it impossible for most Londoners to afford such lavish fashion just after the War. Thankfully a couple of images and newspaper clippings in the Gilbert album paint a vivid picture of the period.

Decades and a move to Los Angeles later, Rosalinde and her husband Arthur became the most successful private collectors of decorative arts in their generation. Their success as collectors is intimately linked to the taste they developed in their years as fashion designers in London. Compare the fashion ornaments with some of the Gilbert’s later purchases, now part of the Rosalinde and Arthur Gilbert Collection at the V&A, and you can’t but notice an ongoing theme.

The eighteenth-century Paris gold box shown above displays several similar characteristics: its colour and meticulously executed details echo the very taste for the miniature, rich detailing and careful craftsmanship. There is one difference, though: while the ornaments are costume pieces imitating precious materials the box is made of gold, partly covered in costly translucent enamel (some of it restored) and set with diamonds. There are many other wonderful masterpieces in the collection that also reflect this taste – such as this magnificent miniature of Queen Charlotte and an intricate micromosaic necklace.

The Gilberts kept album and ornaments at their home in Beverly Hills, Los Angeles. According to those who had the privilege to be invited to their home, Rosalinde also owned a collection of couture dresses, referred to as ‘frocks’, which might have been memorabilia of her own business, or designer clothes by other preeminent makers that she acquired over the years. We know, for example, that her wedding dress was by Schiaparelli. The pictures, advertisements and newspaper clippings in the album show the enterprising young Gilberts making their mark in London’s fashion business.

Today the name Rosalinde Gilbert is now largely forgotten in the fashion world, partly because many of her designs were sold by fashion retailers under their own label, including some of department stores still associated with luxury and quality. Understanding the history of the Gilberts helps my colleagues and me to understand the collection itself. The fashion ornaments reveal much about the Gilberts before they became collectors and indicate the origins of their taste, while all the time remaining mysterious themselves. If you can help solving the mystery, please do get in touch! Gilbert Gems will continue to post on new discoveries around the fashionable Gilberts and the history of the collection. Rosalinde pioneered ‘austerity fashion’ after the Second World War with ensembles that women could wear from day to evening – a future blog will look at this aspect of her work in more detail.

Hi I have a Rosalinde Gilbert long evening dress 1940’s straight, with sequence down the dress and a shawl that comes from the shoulder to shoulder and drapes down the back. Is it possible to send you pictures via email as I would like more Information about the dress and it’s worth ,
Regards
Sue Moore

I also have a Rosalinde Gilbert model dress, found in a thrift store a few year ago. Would be interested to know more about it too – can send you some pictures.