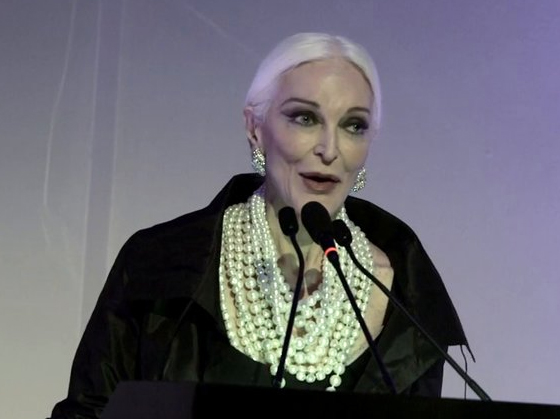 Reputable image and style makers from across London displayed their admiration for master photographer Horst P.Horst last night by attending the definitive retrospective exhibition of his work – Horst: Photographer of Style.

Carmen Dell’Orefice, the iconic model who worked with Horst from 1946, opened the exhibition with Condé Nast’s International President and V&A Trustee, Nicholas Coleridge, which was pertinent given Horst worked with Vogue internationally throughout his 60-year career.

At the end of the speeches Nicholas warmly handed Carmen a framed Horst photograph, which was a gift from Gert Elfering, art collector and owner of the Horst Estate to mark the occasion.

‘Horst was my lifelong friend. I have never seen a tribute paid so perfectly to an artists work. Enjoy the show’. – Carmen Dell’Orefice

Horst: Photographer of Style opens on Saturday 6 September 2014 and runs until 4 January 2015.

Transcription:
I am so grateful to Victoria and Albert for creating this establishment to honour my lifelong friend. After World War Two, in November, was the first time…1945… that I worked with him and the pictures were printed in the Spring of 1946. And believe me, working with Horst was a masterclass in living because he was gentle, he was just so…a male. I was very naive, a very sickly kind of child but he and a host of photographers at Condé Nast took me under their wing. And this was a society of such great gentlemen who were my mentors all my growing up life and remain friends even when they decided and said, ‘You’ve made it Carmen’. And Horst once said to me, when I was in my early 20’s, he said ‘Carmen why are the corners of your mouth always turned down?’ And I realised that my braces were off and I hadn’t learnt to smile. But he kept giving me loving, helpful hints, through marriages, through life. And my most poignant moment in my memory was calling him in Florida and catching him in the swimming pool – he could no longer see – and he said, ‘Oh Carmen, you sound happy, you sound like you are smiling.’ I said ‘I am happy and I am smiling’. And he said, ‘Well lets keep on’. And I said, ‘Its a deal’. And those were my last words with Horst and by then I was….well Im 83 now, it was certainly in my late 70’s.

So, anyway, you’re going to enjoy this show. In all my years of seeing photographic shows, I have never in my life seen tribute paid so perfectly to the artists’ work: the lighting, the framing. I don’t know who did the simplicity of what’s on the wall. I could see everything – everything was lit. I had the privilege of having a run-through – thats what age will do for you. But my compliments to whoever is in charge because it’s spectacular the way… the flow of the rooms. You come into one area…there’s one feeling – I shouldn’t tell you all of this – but the dark walls and the way the covers show, and I visited all of my old buddies and people I knew in my whole lifetime, and then turned a corner and you are gracefully brought into another area that’s light, and the framing doesn’t overwhelm what you came to look at.

I hope you enjoy it as much I did. If anyone is going home, as I have to unfortunately at the end of the week, I really want to say this – American Airlines has got a convert in me. I had one of the best flights over here. Because I need to sleep . I have two new knees and believe me I have to be flat.

Listen, I’ll see you later. Just enjoy the show. I don’t have anything more to say…

Happy to see you!

The role of beauty in Horst’s photographs

Fascinated with the power of lipstick, Poppy King (Founder of Lipstick Queen) visits the exhibition and discusses the subject of beauty captured in many of Horst’s...

Conservation of a Vionnet Dress

This beautiful dress was designed by Madeline Vionnet in 1937 and was given to the V&A in 1968 by Cecil Beaton. It will be on display in the Horst: Photographer of Style...