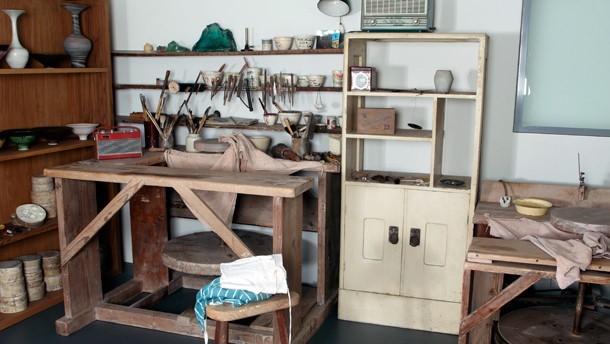 Lucie Rie stands among the most celebrated studio potters of the twentieth century, and her distinctive modern tableware and ornamental wares in stoneware and porcelain have been widely exhibited and studied. Much less is known about Rie’s early work making buttons in the 1940’s when she arrived in London as a Jewish émigré.

Lucie Rie was born in Vienna, and studied pottery at the Vienna Kunstgewerbeschule under decorative artist and sculptor Michael Powolny. In 1925 Rie set up her first studio in Vienna, and, over the next twelve years, established her place in the artistic community, winning a silver medal at the Paris International Exhibition of 1937. In 1938 she, like other artists such as Frank Auerbach, Naum Gabo and fellow ceramicist Hans Coper, fled Nazi-occupied Austria to set up life in London. Upon arrival she continued to work and volunteered for Home Defence duties. However, whilst establishing her studio in London and a new market for her work, Rie needed to find a way of making a living. Fritz Lampl came to her aid by offering her a position at his company, Bimini.

Fritz Lampl was also born in Vienna. Between 1938 and 1940 he re-established his glass manufacturers in London, successfully producing a range of decorative glass tableware and figurines for the luxury market. The figurines were labour intensive and complicated to make, but the combination of traditional techniques and an awareness of modern design proved popular with a contemporary audience. The V&A has several Bimini figurines in the collection, such as this elegant lamp-blown glass figure representing Josephine Baker.

Upon arrival in London, the firm had difficulty registering the name Bimini and so Lampl chose the name Orplid, inspired by a German poem by Eduard Mörike. Once established, the firm continued to produce figurines, but also began making smaller decorative objects which were quicker to produce and were popular during a period when wartime rationing restricted the production of luxury goods. Tiny lamp-worked ornaments were especially popular, and were used to adorn hatpins. These later examples below are in the V&A collection and were similar to those being produced during the war. These were made by Henry Edward Murphy between 1950 and 1960, and the variety of subjects includes a peacock and a double bass (C.81-98 -1995).

Lampl also began producing press-moulded and blown glass buttons. For some of the designs, he used plaster copies of coins in the British Museum. As the work was relatively unskilled he provided employment to many of his friends from Vienna and in the Jewish community in London. Rie was one such employee and she began producing glass buttons for the company. There are a number of these glass buttons in the V&A collection, and they display the range of styles being produced by Orplid during the war. Many of the designs are gilded, and have a brass back with the company’s trademark flowerpot design distinguishing them as Bimini/Orplid buttons. Towards the end of the war Lampl set up a new workshop in Lees Place, near Bond Street Station, and employed fifteen people in order to supply glass buttons to fashion houses and department stores such as Harrods and Liberty’s.[1]

Rie then began producing her own stoneware buttons in her studio at her house, 18 Albion Mews, near Hyde Park. A reconstruction of part of her original studio is on display in Gallery 143. She began making buttons on the wheel, which according to Bernard Leach was a ‘slow and tedious method’.[2] Other buttons were formed by hand, twisting the clay into a variety of knotted and twisted forms, and despite such time consuming methods she could still produce up to two hundred buttons a week. In 1942, Rie hired Rudolf Neufeld, a fellow refugee, as an assistant. With his help they developed a series of plaster moulds. Clay could be pressed into the hollow moulds, and this rapidly sped up the production of the simpler button shapes. The moulds remained on the shelves in her studio until her death, and a selection are also on display in Gallery 143.

Over time Rie developed a wide range of designs with names such as Bow, Rose, Stars and Lettuce, and employed six people (including Hans Coper) in her studio to support production. Rie also developed a range of innovative glazes, and it is thought that this early experience of imaginative and fast glaze development contributed to her distinctive later glaze textures and colours, for which she is so famous.

The more elaborate and expensive buttons were aimed at the couture market and were laid out on presentation panels so that visitors to the studio could pick out designs. Leading fashion designers of the period also sent fabric samples to the studio, and within a few days she would have to produce buttons to match. In 1980 Rie met the Japanese fashion designer Issey Miyake, and their friendship resulted in the 1989 exhibition ‘Issey Miyake meets Lucie Rie’ at Tokyo’s Sogetsu Gallery. In the same year, Miyake also used several of her wartime buttons in his collection. Some of the buttons were also made for Bimini and had a metal shank glued to the back with the company’s trademark flowerpot mark.

Rie later extended the range to include a variety of jewellery, umbrella handles, and frames for mirrors. For her, the business represented a pragmatic approach to generating an income during the war, with orders totting up to £176 over a four-month period in 1941. However, today the buttons represent a fascinating insight into this lesser known aspect of Rie’s highly-documented career. Not only do the buttons reveal more about the establishment of her career and her life in London as a Jewish émigré, but they also shed light on how Rie came to develop her innovative array of glaze textures and colours.

A selection of buttons and moulds are on display in Rie’s studio in case Gallery 143 in the Ceramics galleries. For more information about Lucie Rie, please view the objects in the V&A collection on ‘Search the Collections’ or view the Lucie Rie Archive at the Crafts Study Centre.