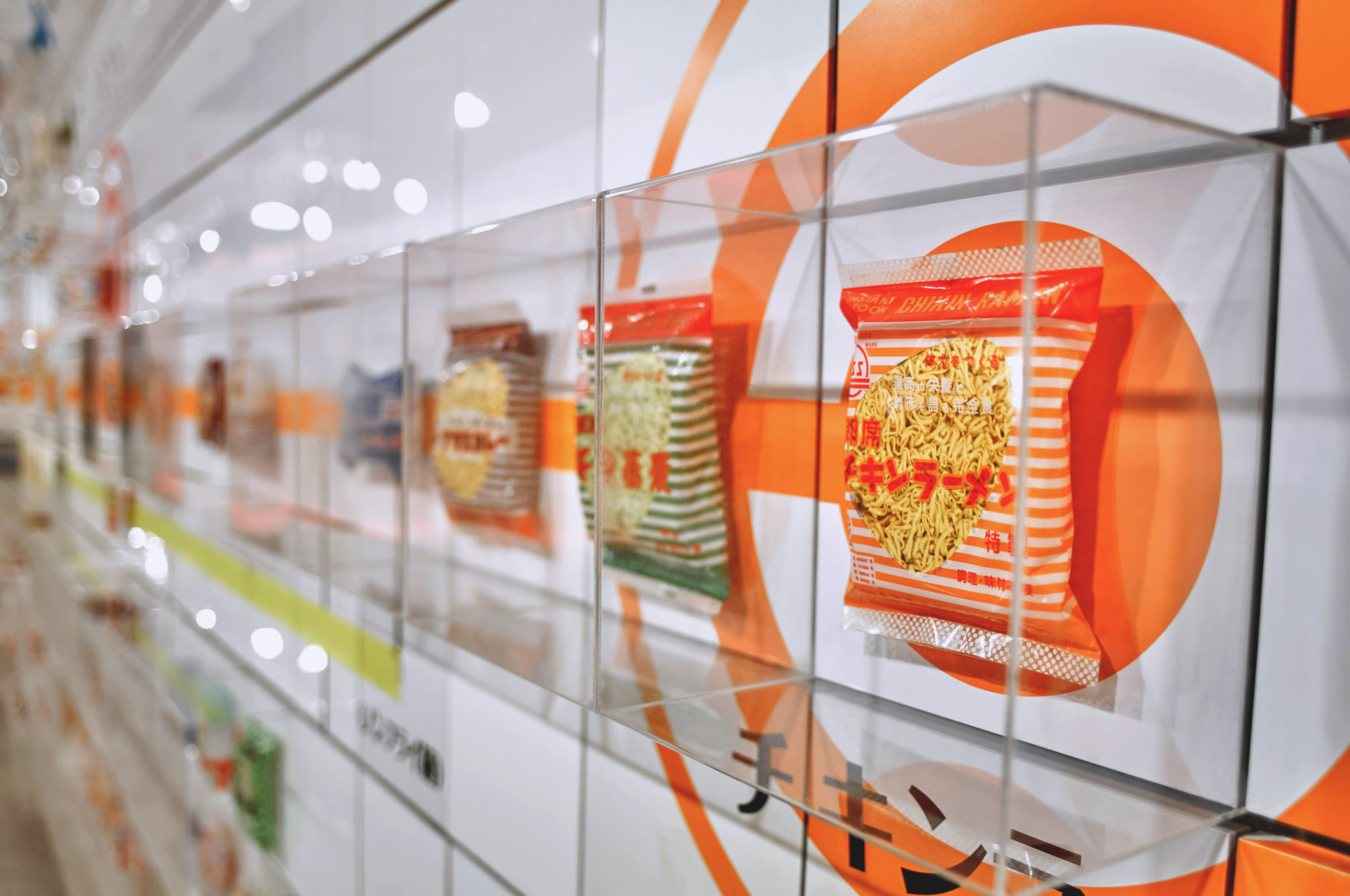 In March 2020, as the rest of London was stocking up on dried pasta and flour, causing empty shelves across the city, I engaged in my own form of panic-buying, stalking my local Asian supermarkets for instant noodles. Living near a large student housing development, I felt an urgent need to track down every last packet (of my very specific favourite flavour), convinced that I might never find them again – and it appears I wasn’t alone in this quest. According to massive USA-based retailer Walmart, sales of instant noodles increased 578% between February and March 2020 as Americans prepared for ongoing ‘restricted living’. And sales figures have remained high throughout the year. So, what does this sudden interest in ramen say about the current global state of affairs?

Instant noodles have long been a part of the global food narrative, but the increasing number of ‘authentic Japanese’ ramen bars in Soho and Shoreditch serving up ‘hand pulled’ noodles for £11 a bowl are a very different animal from the supermarket packets of Super Noodles we so frequently associate with frugality and poor nutritional content. Ramen again entered the cultural zeitgeist with the release of Bong Joon-ho’s Parasite, for many of us the last film we saw in a physical cinema. The iconic ‘Ram-don’ dinner is in reality a popular dish called Jjapaguri (Ram-don as a term was invented for English subtitles) – a combination of Korean brand Nongshim’s Chapaghetti and Neoguri noodles. The film’s addition of a Hanu (luxury beefsteak in the same vein as Wagyu) topping, serves as a symbol of the class struggles underlying the story.

The context for the creation of instant noodles is deeply rooted in cultural exchange. Noodles are thought to have originated from China in the sixth century; Japan resisted this ‘foreign’ food for centuries, before ramen as we generally understand it today was being consumed there in around the 1920s. After WWII, the USA gave grain to Japan as aid, and thus the Japanese government went about promoting wheat – and its use in noodle form – as an alternative to rice. In 1958 the Taiwanese-born Japanese inventor Momofuku Ando perfected a method for flash frying and preserving noodles, making them quickly soften in boiling water – the instant noodle was born. Legend has it that he was inspired by the wartime hunger he observed across the country, seeing long lines of people waiting for food from unlicensed noodle stalls.

While many of us think of instant noodles as the archetypal cheap ‘student food’, when they were first invented, they cost significantly more than buying fresh noodles from a local producer. Indeed, much of the original appeal of instant noodles was the novelty factor – the draw of innovation so closely tied with growing mid-century consumerism, and the move towards solitary dining as result of modern living with new media, like television. To sell his product, Ando founded the Nissin Food Products Co., and the packet form of his original ‘Chikin Ramen’ largely stayed the same as it spread in popularity across Asia. In 1971, Nissin launched Cup Noodles in the USA – using a disposable container as a key adaptation for the instant noodles’ new audience, where bowls and chopsticks were not the culinary mainstays that they were in Asian households. Thereafter followed a boom in production and flavour diversification, and the World Instant Noodles Association was established in 1997 “with the purpose of improving the industry and enhancing people’s diet around the world by improving the quality of instant noodles as well as increasing consumption”.

Today, there are hundreds of instant noodle brands and varieties, with China the leading consumer, with a whopping 41.45 billion servings in 2019. There is an Instant Ramen Noodle Museum in Osaka, Japan – and in the USA noodle packets are frequently used as currency in prisons. Instant noodles have even been to space: Ando invented a vacuum-packed version called ‘Space Ram’ for Japanese Astronaut Soichi Noguchi on his journey in the space shuttle Discovery. Late last year, Ravensbourne University student Holly Grounds attempted to re-think instant noodles by designing an eco-friendly ‘biofilm’ to replace the wasteful packaging. It keeps the noodles from going stale, and is embedded with flavourings, so that when boiling water is added it dissolves within minutes. Wrapped in recyclable wax-coated paper, this could be a partial solution to the ubiquitous plastic packaging problem.

Image: Holly Grounds’ design for an eco-friendly ramen packaging as featured in Dezeen.

The last eleven months have been an emotional rollercoaster. Before the true costs to lives and livelihoods were revealed, we were encouraged to ‘make the most’ of our unexpected time off. Spring 2020 was a time of banana breads, extravagant home-brewed coffees and elaborate multi-course homemade meals. But as the horrific consequences of global lockdown and the pandemic grew more apparent – compounded by a string of tragic world events most notably George Floyd’s murder – optimism dwindled. With the joie-de-vivre gone, many of us are now focused simply on meeting out basic needs, to keep going against this perfect storm of misery.

This is where instant noodles shine – our soothing, nostalgic friend so easily prepared in so little time, always there in the back of the cupboard. When the weight of it all became too heavy, I could simply open a packet into a bowl, shake in the flavouring, boil some water, let it sit, and five minutes later be eating a tasty, salty but sweet, comforting meal. When I had a bit more energy, I might actually make it according to its instructions, boiling a pot of water on the stove, whisking the flavourings to make a thicker broth in which to submerge the noodles. And if I was really feeling fancy, I could add extra vegetables or tofu (or an egg, if you are so that way inclined) – this way of ‘hacking’ ramen makes it feel less like you are somehow cheating at being an adult, because you can legitimately say that you are cooking. Everyone has their favourite brand, and their own way of preparing it, and this simple act of talking through emotional ups and downs, sharing recipes, and taking care of ourselves can feel like an act of resistance.

Ando is often quoted as saying “Peace will come to the world when the people have enough to eat”. Let’s shout it louder for the people at the back.

The attendant in the top left of this print can be seen bringing stacked boxes of noodles for a celebration.

‘Thanks To Parasite, Instant Noodles Are Back On All Our Shopping Lists’, Georgia Aspinall, Grazia, 2 December 2020.

A compelling take on the comfort food can bring. Also several interesting pieces of information I can reference when presenting a fixture of Japanese food to key stakeholders at work next week!

Using Cinema HD is incredibly easy and user-friendly. The first thing you need to do is download the app on your mobile device or smart TV. Once the app has been downloaded, open it up and take a look around. You’ll see that the interface is very clean and easy to navigate. There are four main sections on the home screen: Movies, TV Shows, Search, and Settings.