One of the many benefits of my role as Principal Investigator of the Architectural Models Research Network is that I have the immense pleasure of getting to know a wide range of people who share with me a passion for architectural models, from collectors and professional model makers to architects, curators and enthusiastic model lovers.

Recently, I had the opportunity to visit two architectural practices. My discussions there gave me a compelling insight into their working processes, and the way they use models in their everyday working life.

During the summer, Hawkins\Brown Architects organised the exhibition “Reinventing the Building” at Chatham House,  which explored how architectural models can help us to re-imagine the way we build to meet future social and environmental needs. Visitors had a chance to immerse themselves in an almost kaleidoscopic, model saturated environment.

More than 70 models of different kinds were on show: from sketch models to highly finished ones, from wooden to digital ones.

Intrigued by the exhibition, I went to visit Hawkins\Brown in their practice and met David Bickle and Sean Allen. It was fascinating and a privilege to be able to spend time looking at models and discussing their use.

When asked about the significance of models and model making in the architectural creative process, David told me that model making is the closest that most architects get to the actual act of building something first hand. The crafting and making of a model offers them an opportunity to explore and research spatial relationships, volumetric concerns and material qualities, and to experiment with form, scale and texture, giving them a sense of pleasure and fulfilment that the act of drawing cannot provide in the same way.

The aspect that I found most striking at Hawkins\Brown was the sheer variety of models that the practice produces. Some are almost poetic in nature, suggesting in evocative ways the intentions of a project on an urban scale, or the playful nature of the interior of a prospective Story Museum, and much more. All of this is achieved with simple materials: fabric, buttons, zips, and simple card.

On the other end of the spectrum are 3D printed, large scale (or even 1:1) details. These are, for example, used to work out aspects such as the best profile of façade panels so to ensure the desired light and shade effects are achieved.

Recently, I also had the pleasure of visiting Nicholas Hare Architects, where I met with professional model maker Marianne Weineck and architects Thomas Longley and Jayne Bird. They took the time to discuss with me a variety of models produced for recent projects.

One particularly striking aspect of the material that I saw at Nicholas Hare Architects was the great proportion of models that were designed and built in order to reveal the ‘inner workings’ of a building.

Such a way of producing and using models has an illustrious tradition. Already in the Renaissance some models were intended to be taken apart, in some cases to show the layout of different floors. The famous model of Palazzo Strozzi is a renowned historical case. 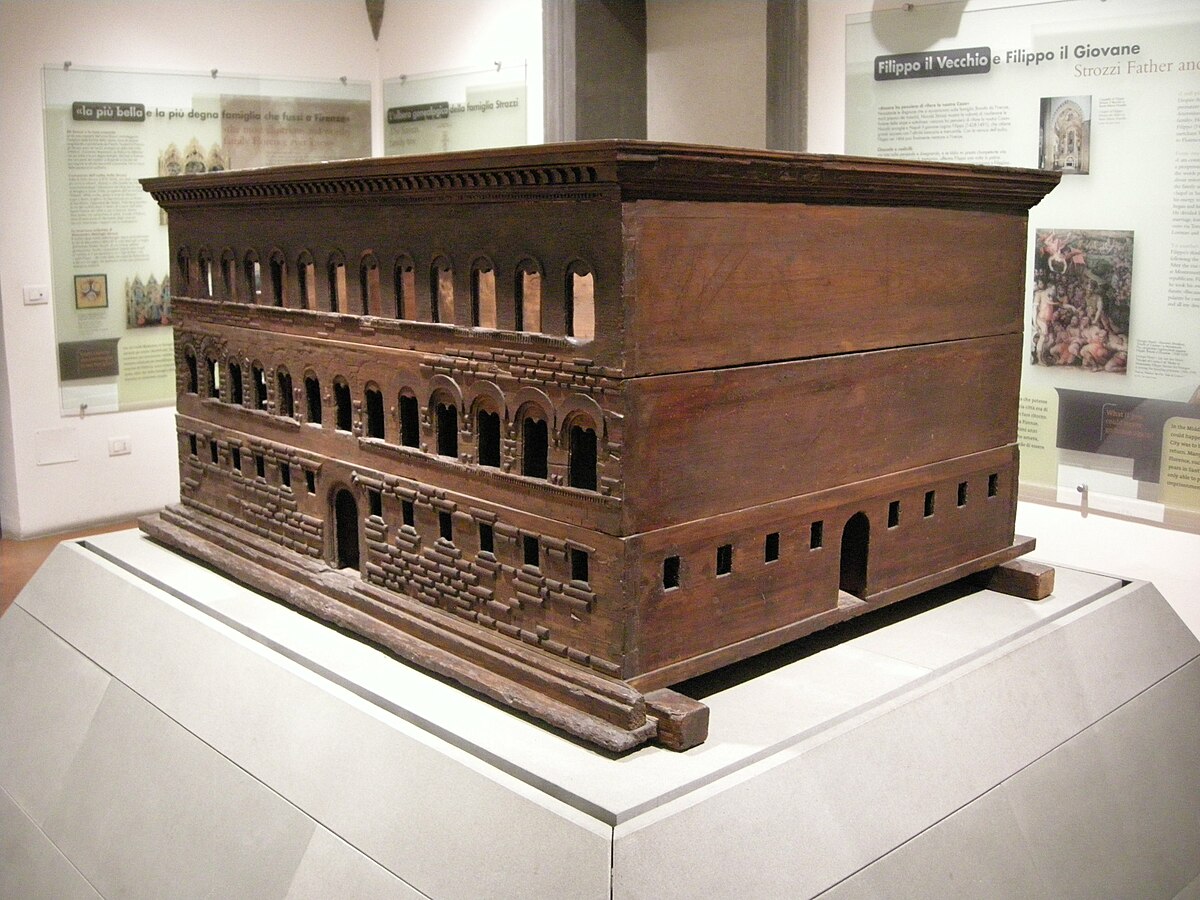 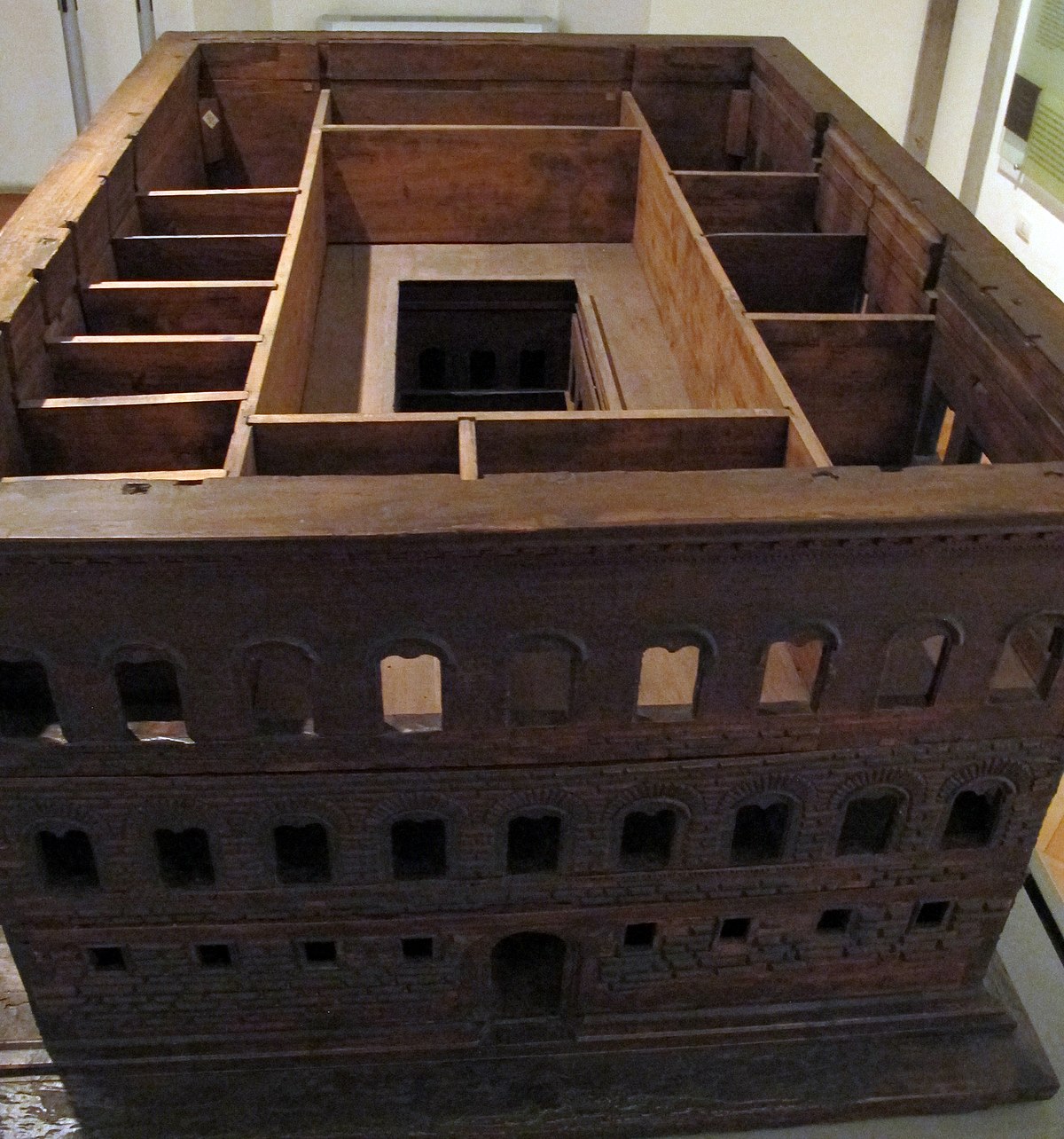 At Nicholas Hare in the 21st century, Marianne regularly produces these kinds of models for contemporary purposes. The one shown here of a portion of Canterbury Christ Church University’s new Arts building was intended as a relatively quick representation at an early stage of the design process to work out the best position for the staircases, and the best way of creating circulation within the building. Several reiterations of the model were produced as the design evolved. 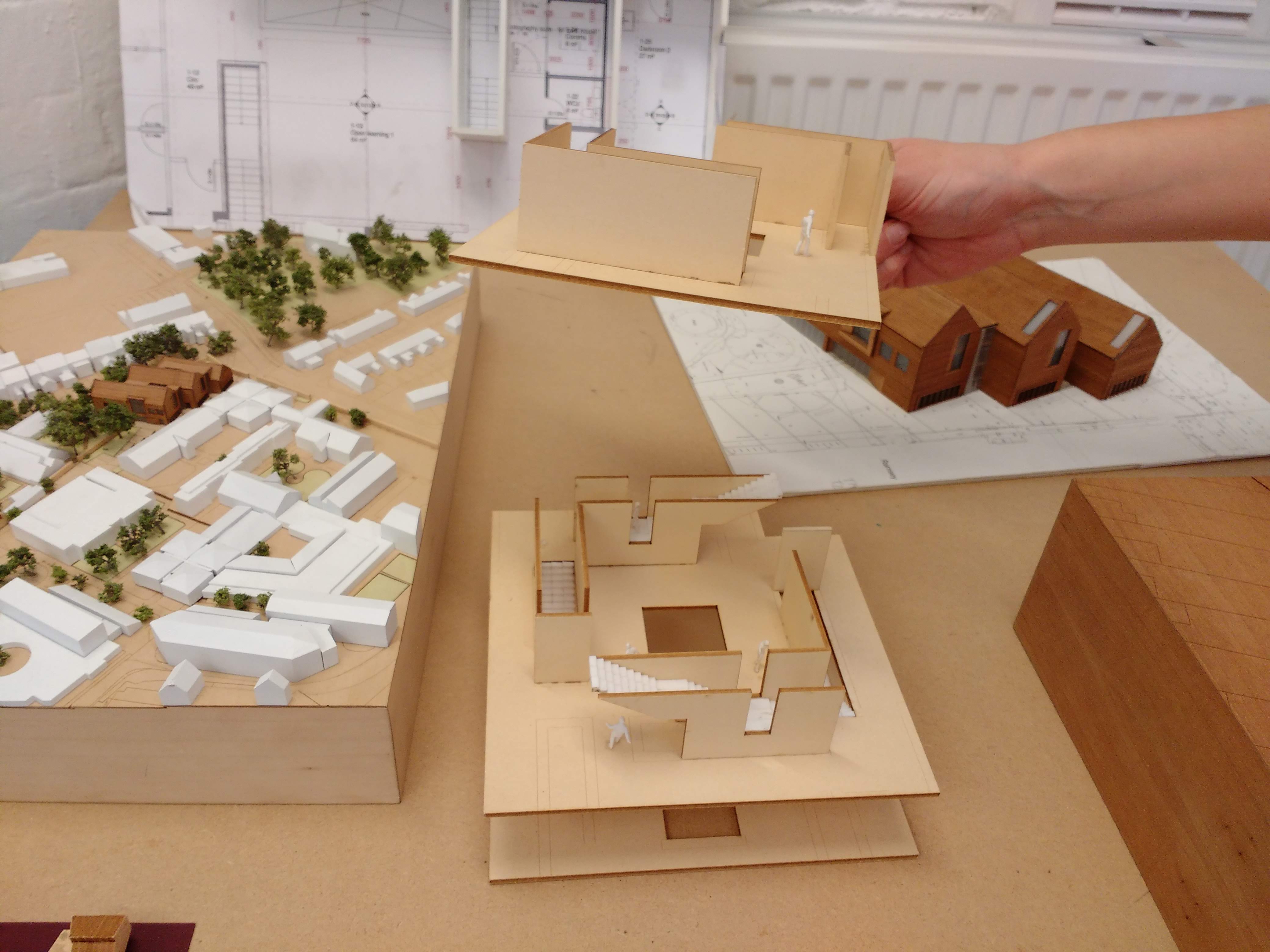 In the case of the design for Canterbury Christ Church University’s new Arts building, the model can be opened to demonstrate both the interior of the building and the relationship with archaeological traces that remain there, which embody the history of the site and which are made visible through the floor of the new foyer space.

Some of the models go beyond representation of the architectural space, also functioning as tools to resolve technical problems. This is the case with the models made for the music Auditorium at King’s High School (part of Warwick Independent Schools Foundation). While the one on the right gives an impression of what the interior of the building might look like, the one on the left specifically addresses a construction problem, in particular the installation of the complex panels constituting the ceiling. It was used by the practice to better understand the problem and develop a solution, but also as a tool to consider and discuss the way forward with the contractor in charge of building the ceiling.

These two encounters with models and their makers, both architects and model makers, encapsulate some of the themes that have emerged so far in the work done by the Architectural Models Network. One theme amongst others, is the varied and active contributions to the development of a design that are made in different practices by architects and model makers alike. In some cases, architects think through the act of modelling in 3D and therefore make most of their models themselves, perhaps with the aid of a model maker. In other cases, architects devolve the act of building the model almost entirely to model makers and instead use the finished object as a tool of comprehension.

But this is perhaps ‘another story’ for a separate post.

To find out more about the Architectural Models Network visit our project page.