This guest post has been contributed by Jenny Saunt, a recent graduate of the V&A/RCA Course in the History of Design. 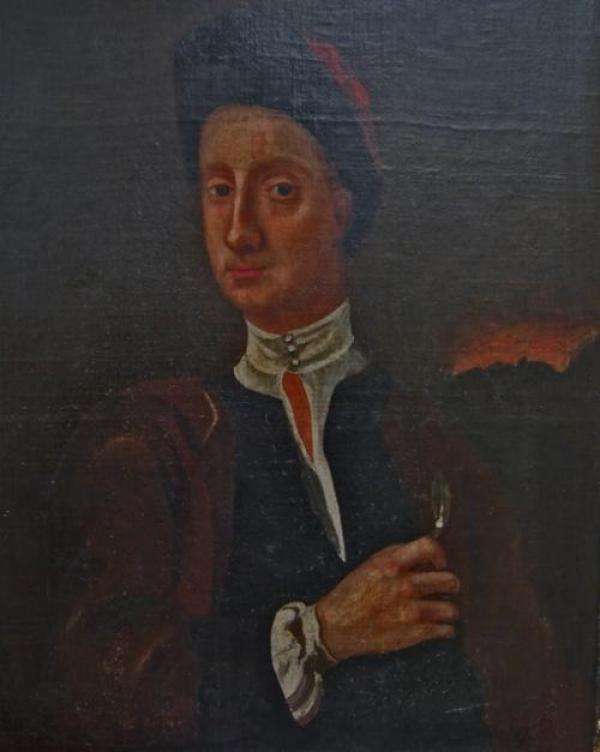 When you are trying to piece together the life story of a seventeenth century decorative plasterworker , you are lucky if you can connect a name to a few bits of decorative plasterwork. John Abbott of Frithelstock in North Devon is the fabulous exception to this rule. Not only is there a portrait of the man himself (above), but his modelling tools have survived… 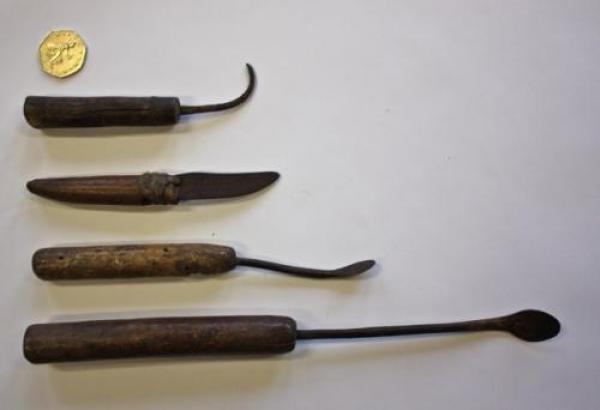 … as well as his prayerbook (helpfully signed by John)… 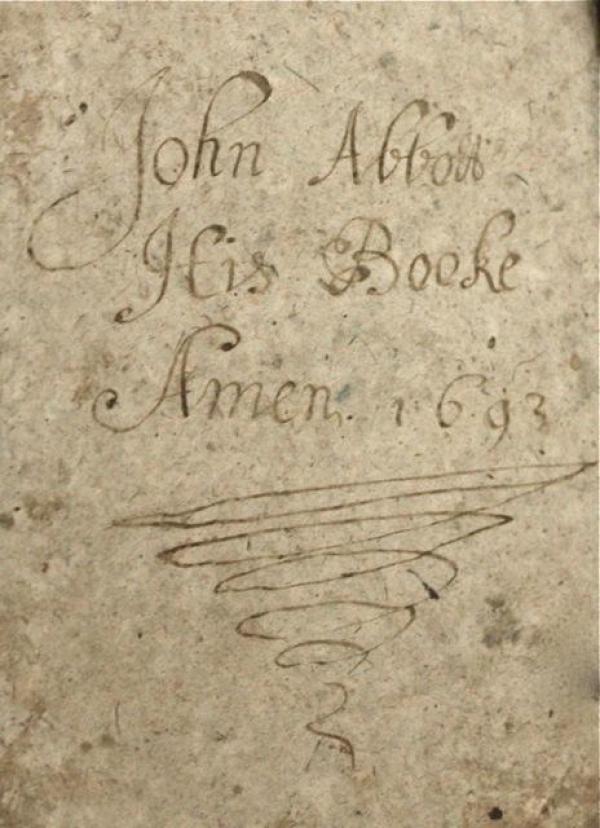 …his shirt, and the good man’s wine bottle. 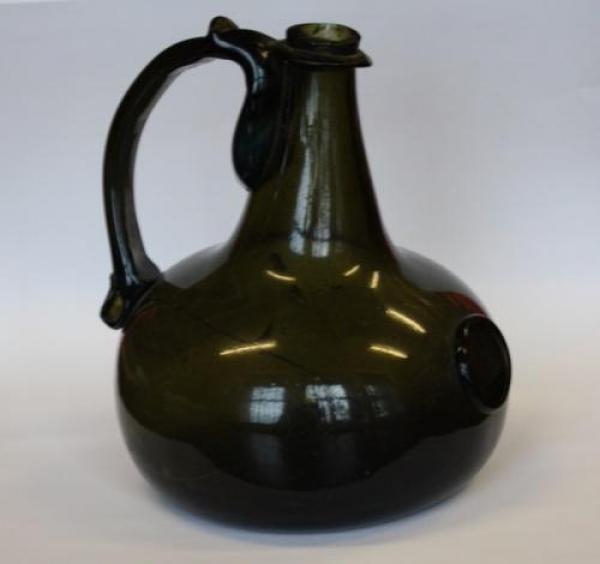 But this is not all that John Abbott has left us, all of which survives at the Devon Museums and Devon Record Office. There is also an extraordinary little book, about A6 size, which contains over three hundred sketches and designs for plasterwork. The cover leaf is dated 1665 and has been signed by various John Abbotts, or perhaps John Abbott impersonators. 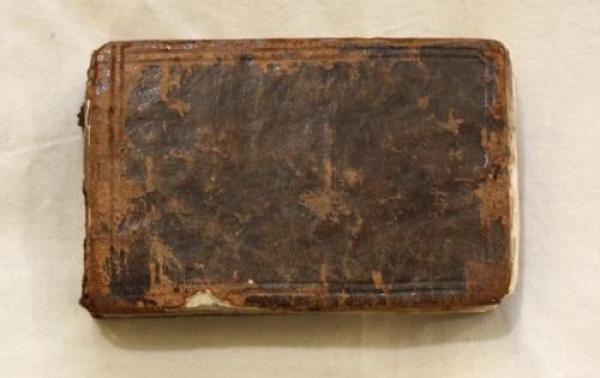 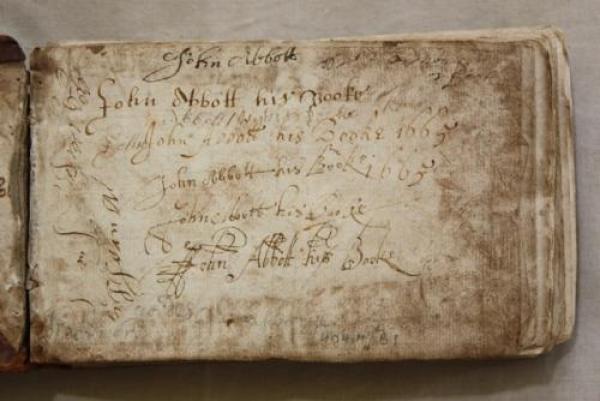 The drawings appear to cover a period of 150 years, from 1550 to the early 1700s, and the general consensus is that they were drawn by several Abbotts from the same family of plasterworkers. However, scholars are undecided about the nature of the book. Who drew what, why and when, is not known, so this fascinating object remains something of a mystery and its exact purpose is unclear.

The Abbott book is not often produced for viewings due to its delicate state, but I recently had the opportunity to handle it as part of my research for the RCA/V&A history of design MA.  Actually handling the book sheds light on some of the questions which surround it, and as you turn the pages of the book a sequence of phases emerges. About the first fifty pages are filled with ceiling designs of complex geometric  patterns that were popular in the second half of the 1500s:

The designs are neatly executed and lightly drawn; fine lined work, intricate and delicate, the ink hardly glancing the surface of the paper. These images would have made an effective pattern book, offering multiple options of pared down designs which could be further ornamented to the client’s taste, creating a fashionable sixteenth century ceiling like this one: 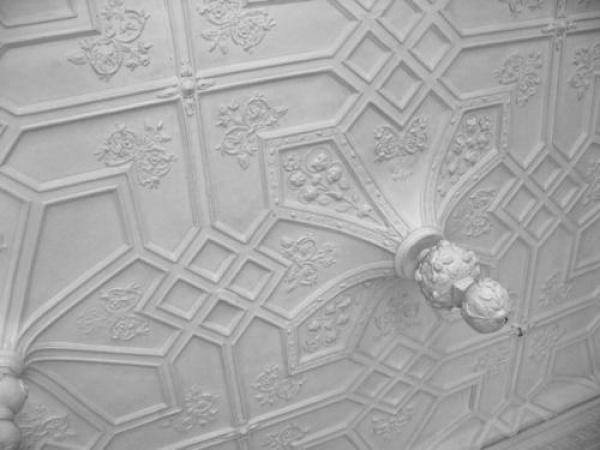 But just when these decorous drawings have lulled you into a sense of comfortable expectation, suddenly, the pages start to explode with possibilities, and there is a noticeable shift of purpose in the images. The contents of the pages become increasingly haphazard; the placing of the drawings more irregular; and the images squashed in. The lines are heavier in places, and the style takes on a freer feel. The subject matter becomes more variable, as designs for single motifs jostle with coats of arms and ‘high maintenance’ mermaids. 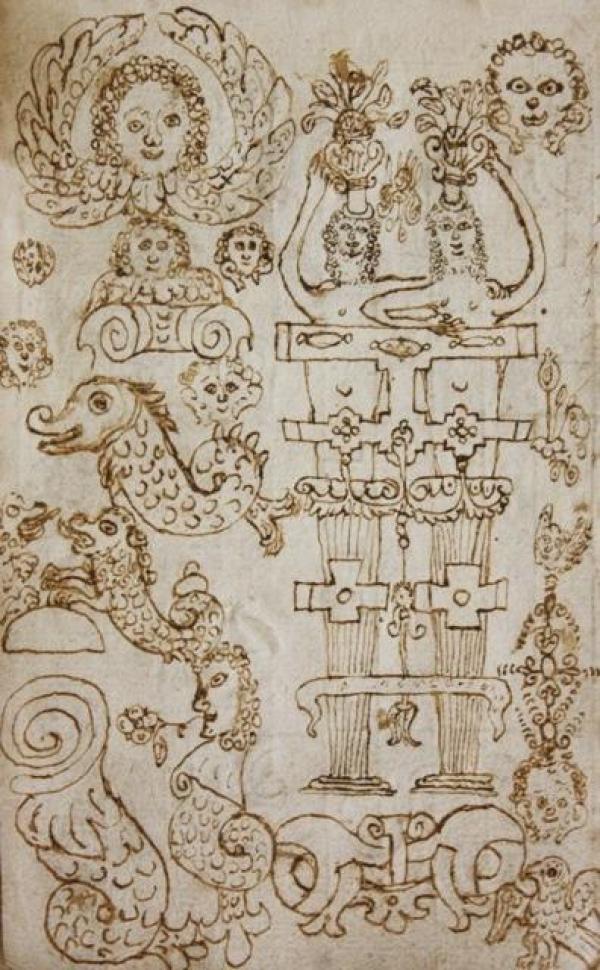 These compilation pages seem to push for some experimentation which reaches out for ‘new’ ideas. Is this just a new look, or is it a new John Abbott?

There are over 30 ideas for overmantles in this section, like this one: 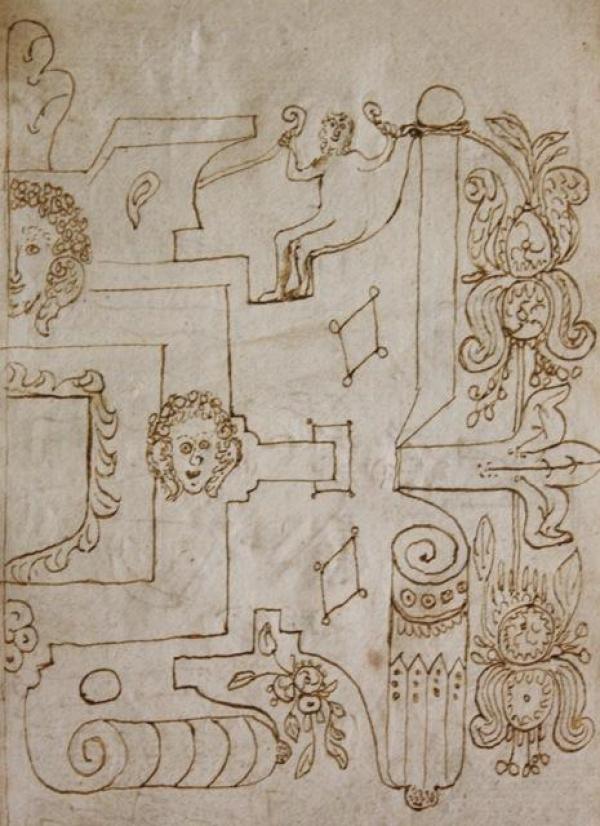 These can be associated with much Devon plasterwork; whilst not identical there are marked similarities between the plaster (below) and the drawings (above). 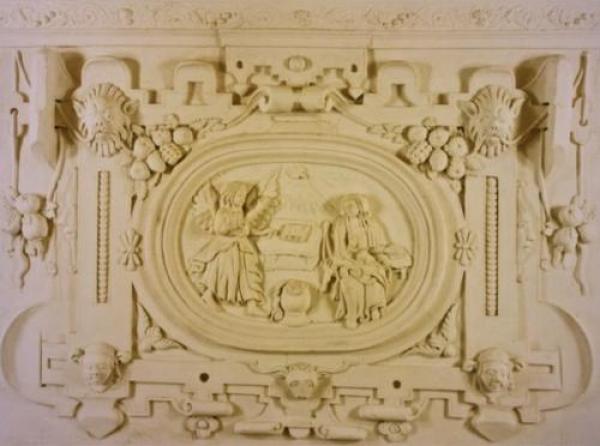 In the same section of the book there is a drawing for the royal arms which John Abbott modelled in plaster in his parish church at Frithelstock, which can be seen below on the right (Many thanks to local Frithelstock man Dr. Canniford for step ladder and rake intervention). 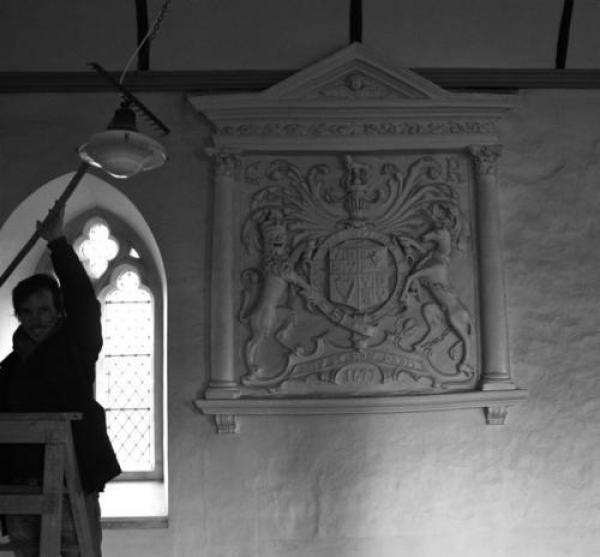 The drawing is meticulous but tiny, too small for a design proposal, considering the size of the actual monument, and far too neat and resolved to be a planning phase. This image may have been performing as a portfolio piece to record and advertise John Abbott’s work.

The book moves through many more phases. The shifts in style and subject matter provide evidence of its changing ownership and the transformations in its role. Pinning down exactly which John Abbott did what is part of a bigger project, but before leaving Abbott I would like to look at a couple of my favourite oddities from the book. The first of these is the appearance of a mystery guest hand at work. In the preceding pages John has been carrying on in his usual inimitable way, churning out reasonably cheerful cherubs and disgruntled Green Men… 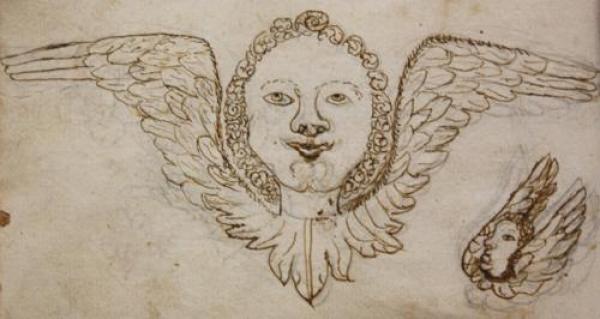 …when without warning an unexpected sophistication hits the page. For one drawing it seems that a different hand is at work.  This visitor conveys a fluid grace and authority of line that has not been seen before. The image suggests the edge of frame. 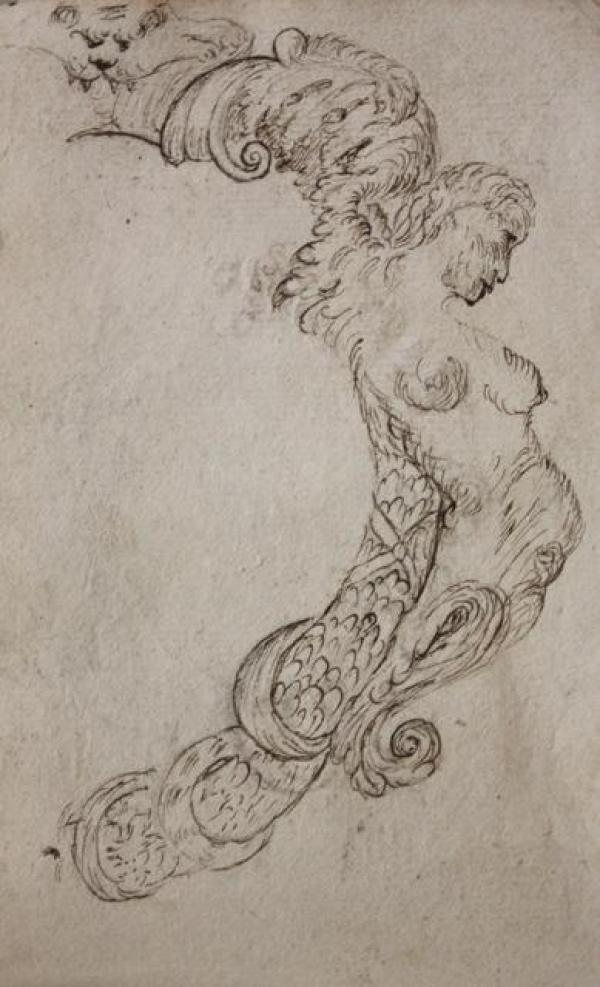 This clearly had an impact on subsequent drawings, and it is followed by 20 or so frame designs which, being less accomplished, appear to be by a hand which is much more familiar to us. 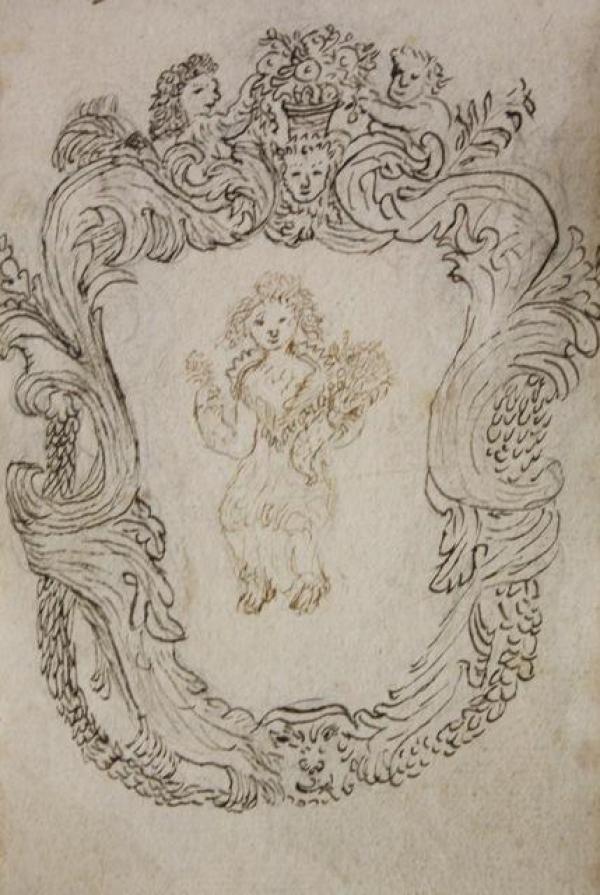 Is the one-off drawing the work of a friend, colleague, or idol? Whoever did it clearly had access to different influences and education, and John knew or admired this person enough to let them mark his book.

Another of my favourite oddities occurs a little later. This time the style is similar to the preceding drawings, but it is one of the few that is executed in pencil. It depicts a frame, but it’s carried out so heavily that the impression of the drawing can be seen several pages on. The imprint is so extreme the next two pages can’t be used at all, and the following pages continue to hold the impression. 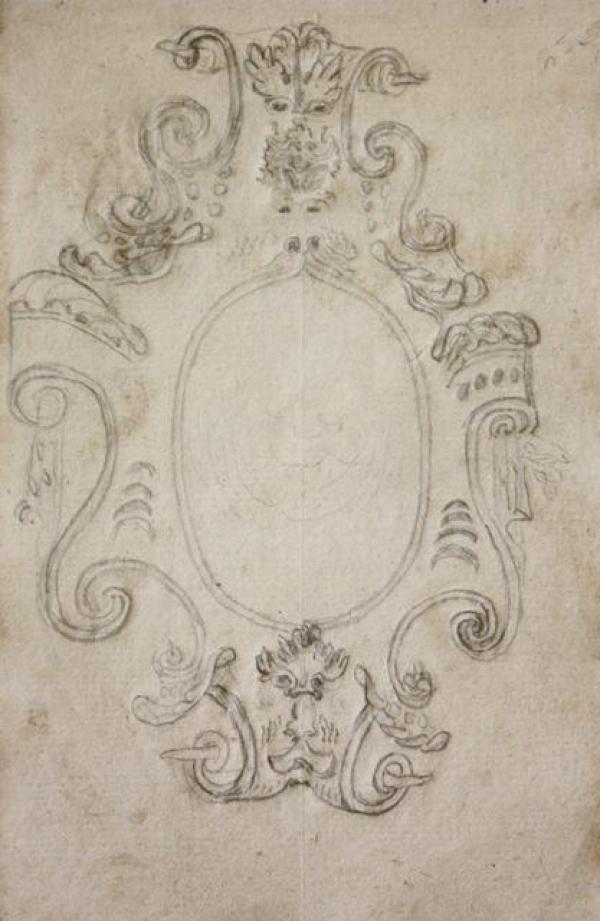 This weighty drawing is unique in the book and the dented pages are some of the only ones left blank. The impact of the line suggests that the image might be a sketch from life. The placing on the page is lopsided, but the details are well recorded for reference. Was this object something so fantastically new and satisfying that John Abbot just had to make a record of it when he came upon it? With no table to rest on the book took all the pressure of his hand.

Although it heralds a new phase, he doesn’t make the same mistake again and the blank pages are followed by pages of delicately drawn fragmentary pencil sketches, capturing details of architectural ornament. 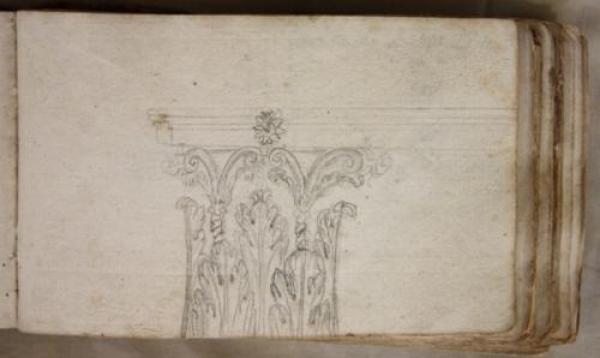 So at this point it seems the book has become a means of recording what he saw.

It’s intriguing that the date of this heavily textured drawing, where the tip of the pencil gouges out the page, corresponds with the date of his most extreme high relief plasterwork. Leaping from the ceilings, this plasterwork hurls itself outwards reflecting the physicality of this drawing. This plasterwork is more than high relief; it is three-dimensional form that might escape its moorings at any moment. 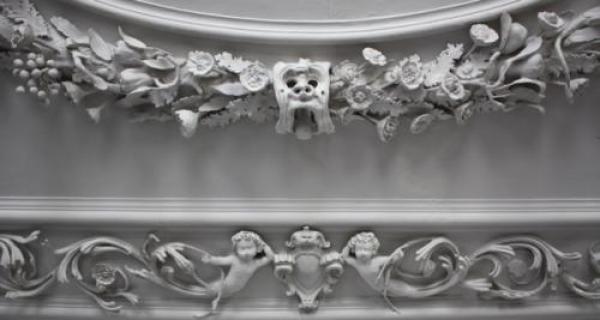 The Abbott book is bursting at the seams with ideas, teaming with entertaining possibilities that can feed endless conjecture on its role. Multifaceted, it operates on many levels; an archive of design proposals; a possible copy book, a record of work done and a tool of self-promotion. Being pocket sized, it would have made an ideal portable portfolio and pattern book, whilst being handily available as a sketchbook for those moments when John Abbott felt moved to record decoration that he saw about him.

I have found reading this very interesting particularly about John Abbott. We bought a house in October 2015 called Dean Head just outside the village of Goodleigh in North Devon.
We have two over mantle plaster works by John Abbott and a geometic ceiling in the Drawing Room. We have some documentations about the history of the plaster works and the Abbotts family are mentioned in carrying out the plaster work at Dean Head
I’m wondering if you might have any more information on the plaster works or John Abbott or even Dean Head

this is indeed fascinating as I am a lime plasterer living in Appledore, near Bideford, and it was at the museum there that I saw a photograph of a portrait of John Abbotts C1576 (the painting above) today and searched online for more, I found this excellent article.