This guest post has been contributed by RCA/V&A History of Design graduate Charlotte Austin.

How would you describe your location in a world without house numbers? What if those looking for you couldn’t follow written aids, due to poor street lighting or their own illiteracy? Before the introduction of the numbering system in the eighteenth century, addresses were given like this:

To be let, Newbury House, in St. James’s Park, next door but one to Lady Oxford’s, having two balls at the gate, and iron rails before the door.

From strikingly-painted houses, doors, door-posts and balconies, to candles and coloured lanterns burning in windows, our ancestors traversed their world following visual cues. Chief among these was the signboard.

Signboards have been known since Classical times. In Medieval Europe, the use of emblems to distinguish inns and trades became more complex as heraldic imagery was incorporated, and establishments gained vernacular names based on eye-catching elements of the coats of arms which marked them. Signboards were widely adopted in the Early Modern period, and up to the seventeenth century names remained simple with few combinations. In the eighteenth century they became much more complex, sometimes featuring absurd jumbles of mismatched objects.

Although signboards have attracted scholarly attention from the late nineteenth century, historians have rarely tapped their full potential. Take their role in politics, for instance. After Charles I’s execution in 1649, one innkeeper used the sign of the Mourning Crown to demonstrate his staunch Royalism (and was quickly ordered to remove it), whilst imaginary signs like the Roasted Rump conveyed the sentiments of controversial pamphlets. Similarly, signboard-making has received little attention as a collaborative craft involving carpenters, joiners, carvers, sign-painters, gilders and ironworkers. 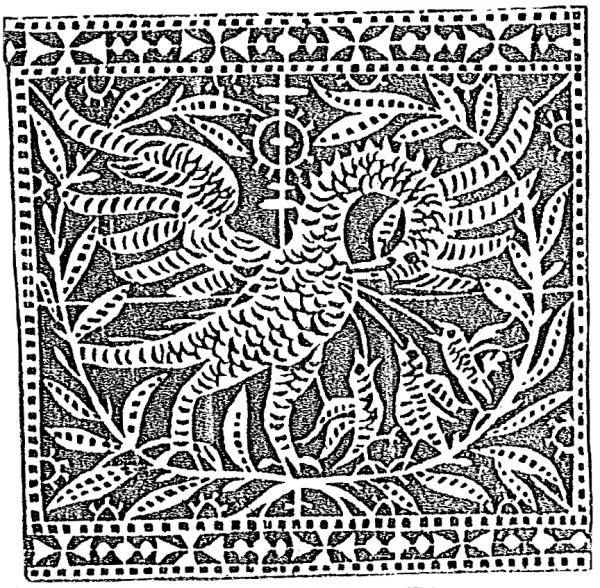 This needlework design from Richard Shorleyker’s A Scholehouse for the Needle (1632) exemplifies the widely-circulated templates available to amateurs. It could easily have been translated into a signboard design.

Signboards weren’t always helpful, and we should remember that masterly artists were scarce, and their talents rarely given up to the mercy of the elements and drunken revellers. It’s clear that most pictures ranged in quality from the mediocre to the unrecognisable. (As the Tatler put it, ‘the paintings are usually so very bad that you cannot know the animal under whose sign you are’.)

Nevertheless, competition for attractive, costly signboards led to rich ornamentation and elaborate ironwork. When the French traveller Mission visited Britain around 1698, he observed that London signs were ‘commonly very large, and jut out so far that in some narrow streets they […] run across almost quite to the other side. They are generally adorned with carving and gilding, and there are several that with the branches of iron which support them, cost above a hundred guineas’. In the provinces, where there was more space, signboards could be hung from decorative arches of wood and iron. 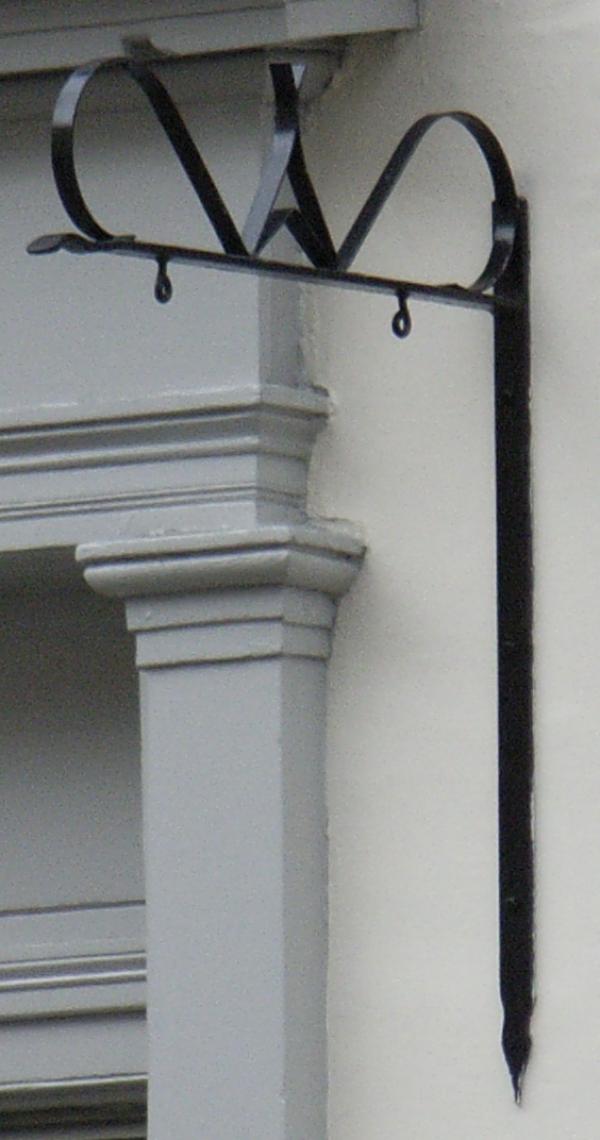 The woodcut illustration at left, from a late seventeenth-century poetic verse, shows signboards jutting out from buildings on long poles. The surviving iron bracket (seen in Bath) is evidence of a former enterprise.

It’s true that signboard painting gave employment to both inferior and high-class painters, as the involvement of Royal Academicians, and masters such as William Hogarth, shows. But generally, a great rift concerning trade boundaries and skills existed between the two branches. This trend was nothing new, as the records of the Company of Painter-Stainers show. In the second half of the thirteenth century, the Painters, who decorated, coloured and gilded solid objects, and the Stainers, who applied colour to woven fabrics, disputed riotously over the protection of trades. They didn’t resolve their differences until 1502, when the two guilds merged into one.

Using the invaluable resource Early English Books Online, it’s easy to survey popular attitudes to sign-painters. (Simply enter a search term and it will trawl a collection of digitised printed materials and display your results as images or text). In 1684, for instance, John Oldham commented: ‘A common Dawber may perhaps have skill / To paint a Tavern Sign […] / But what is this to drawing of a Fight, / A Wrack, a Storm, or the last Iudgment?’

In his poem of 1650, To an old Gentlewoman that would have her Picture drawn, Robert Heath mocks an old lady’s vanity, saying that she is so ugly and close to death that the artist’s ‘oyl and labour’ would be wasted. For a picture to truly resemble her, it should be ‘Drawn with black led or with a coal / […] by some rough Dialler’. If she died whilst sitting, the portraitist could dispose of the undesirable work thusly: ‘I’m afraid ‘tis his design / To sel thee for some Tavern sign,/ […] And I shal see thee thy ruin’d face / Hang out in Southwark, old Queen Bess’.

Hogarth’s prints Gin Lane and Beer Street were issued in 1751 in support of the Gin Act. The latter features a rare depiction of a sign-painter. Although in situ painting seems unlikely, he is painting a sign for gin beneath the sign of the Barley Mow, using a suspended bottle as a model. The street’s thriving inhabitants ignore him, showing their rejection of gin, and whilst he may be a resident of Gin Lane, he is profiting from his neighbours’ suffering. Nevertheless, he had Hogarth’s sympathy: his raggedly-clothed form, leaning back admiringly, conforms to Hogarth’s ‘Line of Beauty’, a serpentine shape. Indeed, in 1762 Hogarth co-organised a spoof exhibition by the fictional Society of Sign Painters. It was an act of defiance against the Society of Artists, but was highly successful and a recognition of the importance of this art form. 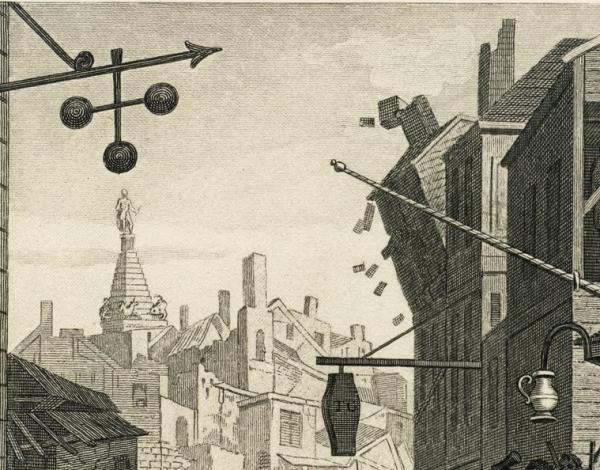 Hogarth used signboards to make comments on society. In Beer Street, the Sun (left) reflects the street’s prosperity, in contrast to the ominous pawnbroker’s, undertaker’s and distiller’s signs in Gin Lane (right).

It’s rather sad that sign-painters come across so badly. Their semiotic system was integral to navigation, and signs were appreciated as faithful landmarks and constant sources of speculation and amusement. The problems they caused – from overcrowding to death by falling sign – together with urban improvements and increasing literacy, prompted successive legislation against them in the 1760s. Nevertheless, they have left something special and age-old in our memory. Who has not been fond of a sign? They have been imbued with personalities of their own.

If you want to find out more, the Bodleian Library’s online exhibition, A Nation of Shopkeepers: Trade Ephemera from 1654 to the 1860s, is a great place to start. Look out for the sections on shop signs and trade cards. If you happen to be visiting Paris, don’t miss the display of wrought iron trade signs in the free Musée Carnavalet.

appendix in history of signboards Larwood & Hotten 1866. refers to Bonnel Thorntons signboard exhibition 1762 and the Society of Signpainters was this spurious?
what was the Banks Collection?