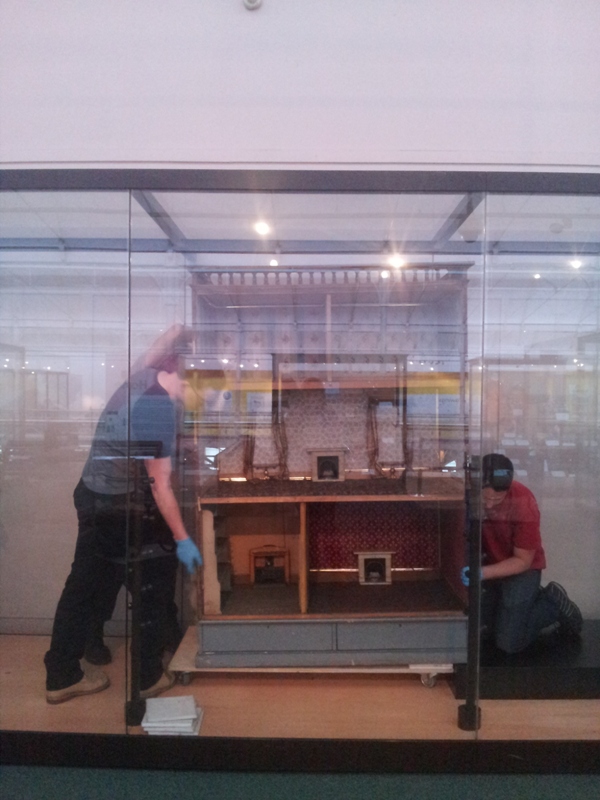 Alongside the Small Stories exhibition, we have also been busy re-organising the dolls’ houses in the Museum’s permanent gallery.

We were encouraged to re-think this gallery, on the top floor of the Museum, because the Tate baby House, Amy Miles’s House, the Killer Cabinet House and the Kaleidoscope House were leaving for Small Stories. This left us with big gaps, but a great opportunity to bring more houses out of store and onto display.

Since the Small Stories exhibition uses dolls’ houses to frame episodes from the histories of every life, and is narrated by the characters inside the houses, we have used the permanent gallery display to do something different. Here, you will find more information about the history of dolls’ houses themselves, as objects of display, education, pleasure and play.

When the gallery is officially launched alongside the exhibition in December, there will be 20 houses which chart the changing shape of dolls’ houses from the Nuremberg House made in 1673, to the Qubis Haus made this year.

Some houses have been in the Museum for a while, but not been displayed for years – like the Tri-ang Stockbroker House from the 1930s and a very early 18th century house. Others have never been seen before – such as the blue roof Gottschalk house from about 1900. We have also moved Mrs Neave’s house, which never seemed to get the attention it deserved, to the centre of the gallery where it can be better seen.

As you can see by these photos, this whole process involved a team of people trained in careful handling. The permanent galleries are taking shape and will be finished to coincide with the opening of Small Stories in December.

It’s great to see this happening all over again. One of my first jobs at BGM was redisplaying the dolls houses. The names of the houses are all so familiar, like old friends. I remember the anxiety of having to organise the move of the Nuremberg! Goodness this would have been 30 years ago! Seems like yesterday …