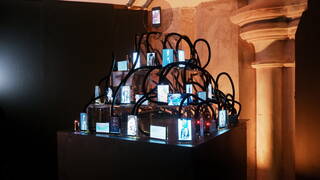 Join us to experience new digital artworks created by students from the MA/MFA Computational Arts programme at Goldsmiths University London and the Media & Arts Technology (MAT) centre at Queen Mary University of London.

Steward
Steward is a dialog between audience and environment created by Robin Leverton. Employing a procedurally generated terrain, slowly decaying over time, Steward records images of this landscape as vignettes printed out as postcards. The audience is invited to scan these postcards back into the system and hold back the decay or take the postcard with them, preserving the memory but at the cost of its further collapse.
@robinleverton

Regularity & Chaos
The 3D fractal shape generated by the mathematical function, through machine learning to create new Mandelbulbs which do not exist. This project created by Chia-Yu Tsai, comes from Chaos theory, the scientific theory focuses on the underlying pattern and rule that were once regarded as randomness and disorder. This project aims to explore the balance between both and keep pushing the border by the complexity.
@charlie.forcode

372.5 ~ Howth
Using tidal charts from the artist’s home town of Howth, Dublin, 372.5 uses a system of pulleys and weights inspired by the historical methods of tidal measurement to recreate its current behaviour. The artwork by Kerrie O'Learyis is a continuation of the artist’s research into hyperobjects and how abstract data can be transformed using technology to make natures complexities tangible.
@kerrieoleary.ie

Multiplicity Rhythm Sensuality
In traditional genetics, the DNA of organisms has very clear boundaries and their molecular forms are arranged to explain the organism through its structure. The genetic code is rigid and unchangeable. Once you change it, the organism evolves in the direction of a monster. Created by Long Chen, this artwork uses AI to directly disrupt this structural nature, allowing them to reveal the infinite possibilities of the organism.
@rothkotheunderdor

New Deity
New Deity by Bobby Zhaocheng Xiong is an interactive installation in the form of a technological altar for the supreme deity of the new era. The notion of gods blurs when religious communities start moving their activities to the Internet. Different congregations pray to the machine treating it as the almighty god. The new incarnation of god breeds tens of transiting intermingling traditional gods from various religions shown on the screens.
@zchsiung

Chaos Bell
A very large instrument developed by Liam Mice, comprising of 20 gesturally performed pendulums with unique sound design featuring
bell-like tones and chaotic drones. Designed with both artistic and analytical goals in mind, it is a probe
into the exploration of instrument size on performance, and a vehicle for the artist’s performance practice

Tidalo
Two-person collaboration driven digital music instrument created by Hazar Emre Tez. When the players’ physical inputs are connected, they can feel each other’s intentions via a two-person bow specifically designed for this experience. The bow requires learning each other’s intentions, adapting, reacting, and eventually
forming a vocabulary to make music together.