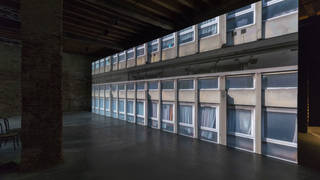 In 2017, demolition began of Robin Hood Gardens, the Brutalist housing estate in Poplar, East London, completed in 1972 by British architects Alison and Peter Smithson. On the eve of destruction, the V&A acquired a three-storey section of each façade and the interior fittings of two flats and commissioned Do Ho Suh to create a work inspired by the architecture, interiors and people of Robin Hood Gardens. Suh’s panoramic film used time-lapse photography, drone footage, 3D-scanning and photogrammetry to create a visual journey in which the camera ceaselessly pans through and around the building.

Do Ho Suh, whose practice centres on the idea of home as both a physical structure and lived experience, created a work in response to the architecture and interiors of Robin Hood Gardens while the second of the two blocks, also due to be demolished, was still occupied.

It is a meditation on home, memory and displacement within a physical structure that is on the verge of demolition, less than fifty years after the architects’ utopian vision was realised. Suh is interested in the ‘intangible quality’ of Robin Hood Gardens as much as its architectural shell: the ‘energy, history, life and memory that has accumulated there.’