Art Historian and Curator, Dr Ridha Moumni, presents on the formation of the Qsar es-Saïd National Art Museum, Tunis; the first national museum of pre-colonial art to be developed in post-revolutionary Tunisia. 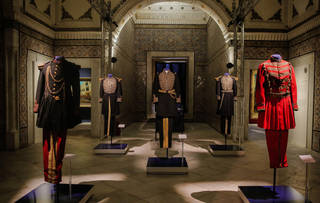 Taking on the complex legacy of heritage institutions in the country; through precolonial, postcolonial and subsequently revolutionary times, Moumni explores the work taking place to transforming Qsar es-Saïd from its historic role as a ‘Palace of Forbidden Memories’ into a modern Tunisian Center for Culture and Education.

Provoked by a new quest for national identity sparked by the Arab Spring, the role of heritage in post-revolutionary Tunisia is now being re-explored. With it comes a revived focus on the Ottoman period (1575-1881) which predated French colonial rule in the country. This largely ignored and little understood period, by both scholars and the public alike, will be the focus of the new museum development.

Join us to hear about the great endeavor of curating not only a new national museum, but a collective narrative for Tunisia as well.