A Chamber Opera for Five Voices. Written by librettist Oge Nwosu and composer Daniel Saleeb, as part of the wider programme around Opera: Passion, Power and Politics 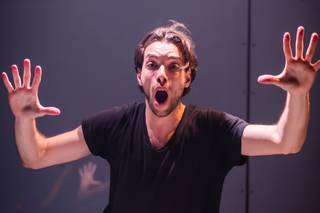 "All those years, I never wanted these people. And now I can’t be rid of them".
Trapped in a Purgatorial space peopled with four significant characters from his life, Occō forces them to perform, for you, his imaginary audience.

To commence his Act he presents Man and Woman; a couple so devastated by an unnamed catastrophe that they have become incapable of meaningful communication with one another. Despite his role as Showman, Occō cannot retain complete command of the show - so animates instead two teenage boys who were once his friends. Wracked by conflicting feelings of exclusion and control Occō is compelled to return to the beginning of his Act.

This performance is loosely based on the world premiere production given as part of the Opera Makers’ MA Course at Guildhall School of Music and Drama.