Do you know your cope from your chasuble, your split stitch from your satin stitch? Discover the key terms and techniques featured in Opus Anglicanum: Masterpieces of English Medieval Embroidery.

Altar furnishings are decorations for the church altar – the table used at the centre of worship in church services . The altar frontal is the rectangular panel that covers the front of the altar, while the dossal is placed above and behind, where it is visible to the congregation. Altar furnishings could be made of precious metal or panel paintings, but were often an embroidered textile. The Steeple Aston Cope is an example of a medieval embroidery which was cut into fragments and remade into an altar frontal and dossal, probably around the time of the Reformation (early 16th century).

Appliqué
A decorative technique in which pieces of one fabric are sewn onto another, including the sewing of a separately embroidered motif onto a ground fabric. It was used throughout the later Middle Ages as a rapid means of producing both small- and large-scale items, with personalised, often heraldic designs.

Burse
A flat purse made of fabric, used as the container for the ‘corporal’, the cloth on which the chalice (cup) and paten (dish) are placed during Mass.

Chasuble
The vestment worn by the priest while saying Mass. The chasuble has its origins in a Roman cloak-like garment without sleeves, the 'paenula', that had an opening for the head and fell over the shoulders, covering the body down to the knees. In the Middle Ages the chasuble was bell-shaped, but by the 16th century it had been modified to a narrower shape which gave more freedom to the arms. Chasubles are often decorated with scenes of the Crucifixion on the back, which would have been visible to the congregation as the priest faced the altar during the Mass. The Clare Chasuble is the earliest surviving English chasuble to be decorated in this way.

Cope
A large, ankle-length, semi-circular cloak worn for festive ceremonies and processions in and outside the church. The copes of the ‘Great Period’ of opus anglicanum (about 1250–1350) were exquisitely embroidered in coloured silks, mainly in split stitch, with details in laid and couched work, and with underside-couched silver-gilt and silver thread.

Watch a demonstration of underside couching.

Dalmatic
A long, wide-sleeved garment or tunic, worn by the deacon (an ordained minister who assists the priest) during Mass. The dalmatic extends down to just above the knees; in theory it is slightly shorter than the tunicle, but in practice often identical.

Filé
Metal thread made from a narrow, flat strip of precious metal, typically silver or gold, wound round a silk core. The finest filé threads in English embroidery measure only 0.25 – 0.3 mm in diameter, and their creation was highly skilled, the craft requiring an apprenticeship of possibly four or five years.

From the early 15th century, embroideries were enlivened with gold or silver twist, made of filé threads twisted together, often used to outline motifs. The Fishmongers’ Pall, one of the most sumptuous English embroideries from the first half of the 16th century, contains a glittering assortment of metal twist and also threads of a type called ‘purl’, made like small coiled springs.

Floss silk
This silk thread was made from loosely spun short or broken silk fibres, untwisted. It produced a relaxed, lustrous thread that was ideal for split, stem, satin or plait stitch, or for laid and couched work.

Silk was imported into England both in its raw state and as finished threads. In London raw silk was processed by silkwomen, a group that included women who made and sold threads and narrow wares, such as fringes, ribbons, belts and laces.

Ground fabrics
For embroidery, these were made out of three principal fibres: linen, silk and wool. Linen was imported from France and the Low Countries, while the silk grounds of 13th- and early 14th-century embroideries could be of oriental as well as continental European origin. Embroideries on linen were closely stitched, the thread entirely concealing the ground, whereas embroideries on silk, like the Tree of Jesse Cope and the Steeple Aston Cope had more widely spaced motifs, which showed off the expensive fabric.

Laid work
A form of couching in which the couching threads are worked in a pattern that forms part of the overall design.

Opus anglicanum
The phrase 'opus anglicanum' (Latin for 'English work') was first used in the 13th century to describe the highly-prized and luxurious embroideries made in England of silk and precious metal thread, teeming with elaborate imagery. These embroideries were characterised by technically difficult stitches such as underside couching and fine split stitch.

Orphrey
Chasubles, dalmatics, tunicles and copes were usually decorated with wide decorated bands called ‘orphreys’. These were placed along the edge of the cope, as vertical bands on the front of the chasuble and dalmatic, and as a cross shape on the back of the chasuble.

Plain weave
A simple weave in which each weft thread passes alternately over and under each warp thread.

Pouncing
A technique of transferring a design – for example, onto a textile for embroidering – by using a fine powder, such as powdered charcoal, to mark the ground material through small pricked holes.

Watch a demonstration of pouncing.

Quatrefoil
A symmetrical form made up of four lobes, usually semi-circular, arranged like the petals of a flower. Designs of this sort became popular as a framing device in the late 13th and early 14th centuries and were used in several different media; they can be found on wooden and stone screen work and in panel painting and manuscript illumination as well as in woven and embroidered textiles.

Raised work
A form of embroidery in which features are emphasised – sometimes with cord or padding beneath the stitching – to achieve a three-dimensional effect.

Rebus
A personal badge or symbol, typically involving the pictorial representation of a name or its syllables to form a visual pun.

Running stitch
The simplest of all embroidery stitches, in which the needle passes into and out of the fabric at regular intervals, making a broken line.

Satin
A close weave (and by extension also a fabric) in which the warp threads, passing over four or more weft threads at a time, predominate on the surface to create a smooth lustrous finish.

Silk twist
A thick, textured thread made from two individually spun yarns twisted together. Embroiderers became adept at exploiting contrasting textures of silk threads, seen in a detail from the Clare Chasuble of laid floss silk couched with a trellis of silk twist.

Split stitch
An embroidery stitch in which the needle pierces the thread of the preceding stitch at every step, creating a fine line that can achieve delicate modelling of details.

Watch a demonstration of split stitch.

Surcoat
An over-garment worn by a knight over armour or chain mail, often displaying personal heraldry. The surcoat of Edward of Woodstock (1330 – 76), known as the 'Black Prince', one of the most successful military leaders of the Middle Ages, is an exceptionally rare example of personal military equipment of a medieval English prince.

The quilted surcoat is constructed from thick linen in plain weave, covered with a layer of wool. Originally a decorative garment, the surcoat offered no real protection, and was worn over armour for display, as a highly visible way for the knight to show his arms. On to the padding were attached panes of velvet in alternating red and blue, with the royal arms of France and England represented on its front, back and sleeves; fleurs-de-lys are applied to the blue velvet, and heraldic lions to the red, with both designs padded and embroidered in gold. Over time, the velvet has lost almost all of its coloured silk warp threads, leaving only the thicker linen wefts, and the metal threads are badly corroded to a dull black appearance, with only minute traces of gold still visible.

Tent stitch
A short diagonal embroidery stitch worked on the counted threads of a linen or canvas ground.

Tree of Jesse
An image depicting the prophet Jesse (the father of King David) asleep, with a tree growing from his side, the branches of which show the lineage of Christ.

Tunicle
A long, wide-sleeved tunic, worn by the sub-deacon during Mass; in theory it is slightly longer than the dalmatic, but in practice often identical.

Vair
A medieval term for squirrel fur, which was used to line rich cloaks. The chest and back fur of the squirrel’s winter coat produce an alternating pattern of grey-blue and white, a simplified version of which occurs in heraldry.

Velvet
A fabric in which a pile is created by the use of an extra warp thread (the pile warp) raised in loops above the foundation weave. These loops are usually cut to make the pile, but can be left uncut, or cut at different heights to produce a varying pattern.

Vestment
A ceremonial or official garment worn by a priest or other cleric. Copes, chasubles, dalmatics and tunicles are all examples of vestments.

Worsted
A long-staple wool yarn (and by extension also a fabric) made from fibres that have been combed parallel; worsted cloth is characteristically smooth-faced, compared with woollen cloth made from carded fibres.

Find out more about the making of medieval embroidery. 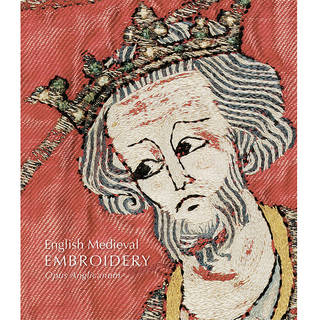 This illustrated book draws on new research and detailed photography to offer an introduction to their design, production, and use.