This incredibly rare tea and coffee set designed by Paul Follot for Wedgwood, and the accompanying design drawings, are an important part of the V&A Wedgwood Collection and archive. The striking service was previously owned by fashion designer Karl Lagerfeld, the creative director for Chanel until his death in 2019, and is the only known example of the 'Campanula' pattern and shape in existence.

Paul Follot (1877 – 1941) was a French designer of luxury furniture and decorative art objects. After World War I, he became a director of the Pomona Studios for the fashionable Paris department store Le Bon Marché where he masterminded compositions of modern decorative art and interior design for the discerning contemporary consumer. During the 1930s he was co-director of French furniture in the Paris branch of English furniture company Waring & Gillow, alongside architect and designer, Serge Chermayeff.

In about 1911, Follot was recommended to Cecil Wedgwood, one of the partners of the Wedgwood company, by luxury French retailer Georges Rouard. Follot completed a number of designs for Wedgwood, none of which were manufactured until the early 1920s. Many of these designs were very labour-intensive for Wedgwood to produce, so were only made in small quantities and are now very rare.

For the tea and coffee set, Follot created four different shapes of cup, each with a complementary saucer: a tasse à café (coffee cup); a tall tasse à "chocolat américaine" (hot chocolate cup); a wide tasse à thé (tea cup); and a smaller coffee cup. The service contains only four of each type of cup and saucer. He also designed a cafetière for coffee; a petite théière (small teapot); a pot à crême (cream jug); and a sucrier (sugar bowl). The Campanula design is distinguished by a scrolling handle and an elaborate long, fluted finial (decoration on the lids) topped by a fleur-de-lis. The hand-painted decoration features black enamel stripes highlighted with a gilded stripe motif, on a gilded base with a scroll pattern.

Only a very small number of Wedgwood products were made in the Art Nouveau or Art Deco styles and so the Campanula tea and coffee service and design drawings are a very significant part of the V&A Wedgwood Collection. Among the drawings is a design for an unusual 'Pomona' Queen's ware centrepiece, also crafted by Follot for Wedgwood.

The drawings offer an insight into the unusually complex design process for this set and show the journey from concept to production. Follot's notes on several of the drawings, such as 'avant réduction' (before reduction) and 'après réduction' (after reduction), suggests that the scale of the drawings represent the size of the pieces before and after the clay shrinks during firing in the kiln.

Acquired from the estate of fashion designer Karl Lagerfeld (1933 – 2019), the set reflects the taste of its collector, known for his love of monochrome and his interest in ceramics. Lagerfeld was an insatiable collector for most of his life, with a passion for the elegance of 18th century decorative arts to the modernity of Art Deco to the contemporary designs of 20th century advertising.

The set was probably used by the designer as it shows some signs of wear. The V&A's conservation team carried out minor work to some pieces, including cleaning some tarnishing to the gold decoration, removing caffeine stains, and repairing a small crack. A project is also in development with Wedgwood to see if a missing teapot lid can be recreated. 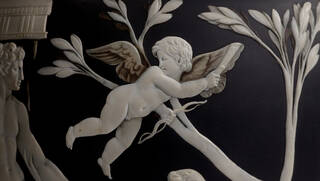