Fashion in Motion is a series of live fashion shows at the V&A featuring leading fashion designers from across the world. Christian Lacroix provided visitors with a unique opportunity to see his theatrical new collection inspired by the Renaissance era.

Born in France in 1951, Christian Lacroix studied History of Art with plans to become a museum curator or costume designer, and fell into fashion by chance. He was an assistant at Hermes, and collaborated with the couturier of the Tokyo Imperial Court, before joining the House of Patou in 1981, where he learned the intricacies of haute couture. He went on to launch the Christian Lacroix House in 1987 and was appointed Artistic Director of the Italian fashion house Pucci from 2002 to 2005.

Lacroix defined the look of the 1980s, combining bright colours and extravagant embellishment. He also designed costumes for numerous stage productions, including a corset for Madonna's 2004 'Re-Invention World Tour'. His passion for theatre, opera and art have provided inspiration for many of his collections.

Lacroix's 2006 – 7 Autumn/Winter collection combines the opulent fabrics, colours and ornamental embroidery of the Renaissance period with contemporary shapes, such as trench-coats and mini-dresses, to create a look that is glamorous and dramatic.

Find out more about Fashion in Motion. 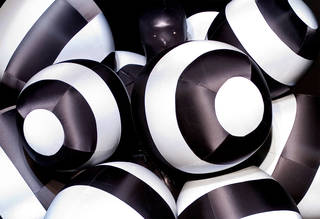