Frederick Hollyer photographed the paintings and portraits of the Victorian artistic elite – including key members of the Pre-Raphaelites, the Arts and Crafts Movement and the Aesthetics Movement

I found Mr. Frederick Hollyer, a sturdy, broad-shouldered, good-humoured and good-looking man of middle age, who comes nearer to the definition of artist-photographer than any other man in England.

Born in London in 1837, Hollyer trained as an engraver. He then took up photography and was elected as member of the Photographic Society of London in 1865. At this period Hollyer had a studio in Kentish Town in London where he made cartes de visite (small photographic portraits that became popular as calling cards and for trading in Victorian times).

Here, Hollyer made photographic reproductions of paintings by Leighton, Watts, Edward Burne-Jones (1833 – 98) and Dante Gabriel Rossetti (1828 – 82), as well as the Holbein drawings at Windsor Castle.

He also photographed many works by Simeon Solomon (1840 – 1905), including the illustrations to the Song of Songs.

Hollyer's photographic reproductions of paintings led to a professional relationship with the V&A that lasted over 30 years, selling his work to the museum at a generous discount of 10 – 25%. Curators at the time were particularly interested in photographs of the paintings taken during stages of development, for teaching purposes.

These are important for students, as they exemplify the manner in which Watts used to alter and amend his compositions before they reached their final condition.

The V&A granted Hollyer permission to photograph and sell reproductions of paintings in the collection. In August 1911, Burne-Jones's painting Merlin and Nimue was 'placed in a good light' so Hollyer could photograph it. He was allowed to do this on the condition that, in return, he gave the V&A two copies of each of the photographs taken.

Hollyer's reproductions were sold as luxury prints, often in signed sets acknowledging both the artist and the photographer. They were advertised in exhibition catalogues and books, with the information that his studio was open daily and a free illustrated catalogue could be obtained by sending Hollyer 19 stamps.

These reproductions provided a source of income for Hollyer, but also popularised the work of leading contemporary artists. People who could not afford original paintings could buy photographic reproductions instead. Framed and displayed alongside tasteful objets d'art, Hollyer's images became an essential part of late Victorian interior decoration.

Hollyer's other speciality became portrait photography. For 30 years, beginning in 1882, artists, actors, journalists, doctors, scientists, clerics and debutantes arrived at his studio to have their portraits taken. A sign outside his studio read:

Portraits from life taken on Mondays only. Appointment advisable.

Hollyer's portraits were circulated by the sitters to friends, family and colleagues, and also appeared in magazines and books. Three albums in our collection contain nearly 200 portraits, acting as a pictorial who's who of late Victorian and Edwardian society. Many of the photographs in the albums do not have an exact date, but the majority were taken in the 1880s and 1890s.

The artists that Hollyer photographed were a diverse group encompassing members of the Arts and Crafts Movement, the Pre-Raphaelite Brotherhood, Aestheticism, Impressionism and the Royal Academy. William Morris (1834 – 96), for example, features in several portraits, including one where he is shown out of doors with Edward Burne-Jones.

Walter Crane (1845 – 1915), the first President of the Arts and Crafts Society, poses with his head resting on his hand, gazing intently out at the viewer.

The fashions of the 1890s dandy aesthete can be seen in some of Hollyer's portraits, including the artist Aubrey Beardsley (1872 – 98) and the writer Richard Le Gallienne (1866 – 1947), who both produced work for the notorious illustrated periodical The Yellow Book.

Hollyer took several photographs of the famous actress Ellen Terry, and other eminent figures include the Irish poet and playwright W.B. Yeats and the novelist Thomas Hardy.

In addition to artists, writers and actors, Hollyer also photographed critics, journalists, historians and social thinkers. Among these sitters were the influential writer and critic John Ruskin and museum curator Dugald MacColl, who later became director of the Tate Gallery in London.

Hollyer also developed an evocative style of portraiture for photographing society ladies – with their faces turned away from the camera.

In 1913 Hollyer retired, leaving his sons in charge of the studio business. A few years later, in 1920, he compiled the three small albums of his portraits specially for his daughter, Eleanor M. Hollyer, that are now in the V&A.

Find out more about Frederick Hollyer. 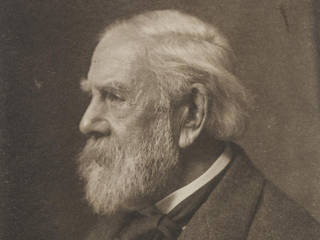