Ilse Bing was one of the leading European photographers of the interwar period. She was born into a comfortable Jewish family in Frankfurt, Germany, in 1899. As a child her education was rich in music and art. In 1920 she began studying mathematics and physics at the University of Frankfurt, but soon changed to study the history of art. In 1924 she continued her studies with a doctorate on the Neo-Classical German architect Friedrich Gilly (1772 – 1808).

Learning photography
Bing's introduction to photography was triggered by a practical need to illustrate her doctoral thesis. She bought a Voigtlander camera in 1928 and began to teach herself photography. The following year she bought a Leica, the new and revolutionary 35mm hand-held camera that enabled photographers to capture fast-moving events. As well as enabling her to photograph buildings for her thesis, Bing's newfound skill with the camera earned her an extra living as a photojournalist for a German illustrated magazine supplement, Das Illustriete Blatt.

During these early days of her career, Bing was also commissioned by the Dutch modernist architect Mart Stam, who taught at the Bauhaus school of design, to visually record all of his housing projects in Frankfurt. The resulting photographs were characterised by dizzy angles, flat planes and strong shadows, which were characteristic of an emerging modernist language of art and design, pioneered by both the new architecture and the 'New Photography' movement, of which Bing was beginning to be a part. Through Stam, Bing was also introduced to Frankfurt's avant-garde artistic circles.

A Photographer's life in Paris
Having found some commercial success with photography, and with her artistic horizons expanding, Bing gave up her thesis in the summer of 1929 and, in 1930, decided to move to Paris to concentrate on photography. Etsablishing herself in Paris as a freelance photographer, she applied elements of the photographic style she had experimented with in Frankfurt to commercial work, including photojournalism, architectural and theatrical photography, advertising, fashion and portraiture.

For the first couple of years in the city, she published her work regularly with German newspapers and Das Illustriete Blat. Gradually, she also started to publish work in the leading French illustrated newspapers such as L'Illustration, Le Monde Illustré and Regards, and from about 1932, she increasingly worked for fashion magazines Vogue, Adam, Marchal, and the American Harpers Bazaar.

She explored Paris' rich historic past and its worn and weathered environments as well as its modern urban scenes, photographing the exhausted grandeur of the Père Lachaise cemetery, dark apartment blocks reflected in gutters, or the layering of torn posters on a wooden fence.

Her fascination with shadow, contrasts of light and dark, and basic geometrical shapes also informed her portraiture. Her photograph of a young girl staring into the distance demonstrates her skill as a portraitist. The large flowers in the background contrast with the delicate bright flowers on the girl's dress, and the shadows behind highlight the bright young face.

When on assignment, Bing would take extra pictures for her own artistic interests, and she quickly built up a large body of work. During a commission to photograph the famous Moulin Rouge cabaret, for example, she made a series of photographs of dancers, which formed her first exhibition in Paris in 1931. Later that year, her photographs caught the attention of the photographer and critic Emmanuel Sougez, who praised their dynamism. Nicknaming Bing 'the Queen of the Leica', Sougez continued to be an important and influential supporter of her work throughout the 1930s.

In 1931 Bing met the New York-based writer Hendrik Willem van Loon, who became her most important patron and introduced her work to American clients. Van Loon showed her work to the collector and gallerist Julien Lévy, who subsequently displayed her work in the exhibition Modern European Photography: Twenty Photographers at his New York Gallery in 1932. Bing also frequently exhibited in Parisian galleries, where her work was shown alongside that of Brassaï (1899 – 1984), Henri Cartier-Bresson (1908 – 2004), Florence Henri (1893 – 1982), Man Ray (1890 – 1976) and André Kértesz (1894 – 1985).

A trip to New York

I did not find the New York skyline big like rocks. It is more natural than that, like crystals in the mountains, little things grown up.

In New York, Bing met Alfred Stieglitz (1864 – 1946), a leading figure in the American photographic world and great supporter of modern photography. We can see the influence of Stieglitz's vision on the photographs Bing made of the city following their meeting. In Bing's image of a carriage in Central park, the cropped dark outline of the carriage and its driver dominate the composition, providing a stark contrast to the wispy trees and gentle cityscape in the background – stylistically reminiscent of Stieglitz's work The Terminal (1892).

The outbreak of war
After returning to Paris in 1937, Bing married the German pianist Konrad Wolff, whom she had met in 1933 when they lived in the same block of flats. Bing kept her maiden name for her photographic activities, but also used the name Ilse Bing Wolff. She took fewer photographs during the late 1930s, though she continued to find inspiration in Paris, and explored different subject-matter, including still life work.

The outbreak of the Second World War changed everything. In 1940 Bing and Wolff, who were both Jewish, were forced to leave Paris and were interned in separate camps in the south of France. Bing spent six weeks in a camp in the Pyrenees, before rejoining her husband in Marseille. The couple spent nine months there, awaiting visas for the US. Eventually, with the support of the fashion editor of Harpers Bazaar, they were able to leave for the US in June 1941.

Although Bing had managed to take her negatives with her, she left all of her prints behind in Paris under the safekeeping of a friend. They were sent on to Marseille but Bing and her husband had left already France by the time they arrived. The prints remained in Marseille – in a shipping company's warehouse – miraculously missing the many bombs that fell on the port, until the end of the War, when they were finally sent to Bing in New York. Tragically, when they arrived, Bing was unable to pay the customs duty for all of them. She had to sift through the prints and decide which to keep and which to throw away – some of her most important vintage prints were lost at this time.

Settling in New York
Five years after her successful visit to New York in 1936, Bing returned to an altogether different environment. This was partly due to changing fashions in photography, and partly because of the large number of photographers who had, like Bing, fled Europe and were now seeking work. Bing found it hard to gain commissions for reportage work and worked much less as a photojournalist from this point on, though she continued to take portraits – especially of children – and exhibited her work throughout the late 1940s and early 1950s.

Revisiting Paris
Bing returned to Paris twice after the war, in 1947 and in 1952, and once again photographed the city that she had loved so much in the 1930s. According to Bing, these later Paris photographs are infused with a different spirit. Influenced by the war, she saw things on a more impersonal, isolated level. In the late 1950s, Bing eventually gave up photography, wanting to make more abstract work through poems and line drawings, and later, collage. 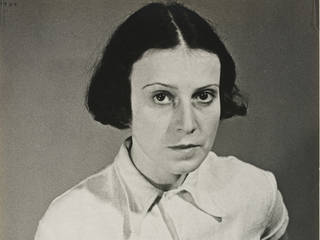