Beatrix Potter remains one of the world's best-selling and best-loved children's authors. She wrote and illustrated 28 books, including her 23 Tales which have sold more than 250 million copies worldwide. In her later years, she became a farmer and sheep breeder and helped protect thousands of acres of land in the Lake District.

Helen Beatrix Potter was born on 28 July 1866 and lived for much of the first 47 years of her life at her family's home at 2 Bolton Gardens in Kensington, then a semi-rural part of London. The Potter family were well connected. Edmund, Beatrix's paternal grandfather, had become wealthy by establishing a successful mechanised calico printing works at Dinting Vale in Glossop, Derbyshire, and later became a Liberal MP for Carlisle, whilst Beatrix's maternal grandfather, John Leech, was a merchant who inherited a cotton mill at Stalybridge in Cheshire.

The Potter family had artistic leanings. Edmund was co-founder of the Manchester School of Design. Her grandmother, Jane Leech, and her mother, Helen, were both skilful embroiderers, and Helen also enjoyed painting in watercolours (Beatrix later inherited her grandmother's embroidery copy book and Helen's watercolour paintbox). Rupert, her father, kept a sketchbook in his youth which he filled with landscapes, nature studies, caricatures and copies of illustrations, mostly in pen and ink. He focused much of his time, however, on his passion for the new art form of photography and was elected to the Photographic Society of London in 1869 (now The Royal Photographic Society). Rupert was friendly with the artist Sir John Everett Millais, whose studio was close to the Potter's home, and helped him by providing photographs of his portrait sitters and landscape backgrounds as reference images.

Rupert Potter's favourite photographic subject, though, was Beatrix, who endured patiently the elaborate choreography and uncomfortably long exposure time. The photographic record of Beatrix's life captures her at home in London, on holiday in the countryside, formal amongst family, or relaxed among her pets. It was Beatrix's delight to accompany her father on photographic expeditions and she became an avid photographer herself, later inheriting one of her father's old cameras, which she described as "a most inconveniently heavy article…which has been breaking my back since I took to that profession".

Beatrix was educated at home by a governess and encouraged to draw from an early age, learning through practice, drawing from nature or copying illustrations. She kept sketchbooks from at least the age of eight. She would later say that she was grateful that her education was "neglected", as a more formal education "would have rubbed off some of the originality". Beatrix's love of nature and art was shared by her brother Bertram, who later became a professional landscape oil painter and etcher. The pair spent hours watching and studying the menagerie of pets in their schoolroom: frogs, a tortoise, salamanders, bats, mice and rabbits. They also had a cabinet in the corner of their room in which they kept a collection of insects, shells, birds' eggs, rocks and fossils.

As a young girl, Beatrix's horizons were limited to the areas closest to home. She went swimming, and visited the Round Pond in Kensington Gardens or the Zoological Gardens in Regent's Park – her paternal grandparents owned a house near Hyde Park. On holiday she had more freedom. Visits to relatives and annual holidays in Perthshire in Scotland and, later, the Lake District, gave her the chance to roam freely in the countryside, on foot or driving a pony-and-trap. At 18, while staying at Bush Hall in Hertfordshire, she took her first driving lesson in a little horse-drawn carriage, which she liked "very much, had no misfortune yet".

Once Bertram went to boarding school, Beatrix was left to continue her education at home on her own. She studied geometry, geography, French and German, and Latin poetry. By June 1883, at the age of 16, she "thought to [be] cutting off more and more time for painting" and between November 1878 and May 1883 her parents arranged for her to have drawing lessons. She also took examinations at the National Art Training School attached to the South Kensington Museum (later renamed the V&A). Beatrix's student pieces from this period included still life studies and exercises in design and perspective, in typically formal style. She was sceptical about formal art training, writing on 28 May 1883: "Painting is an awkward thing to teach except the details of the medium. If you and your master are determined to look at nature and art in two different directions you are sure to stick". Twelve lessons in oil painting from an artist known only as 'Mrs A' made her ambivalent about the teaching method. She wrote in her Journal on 29 November 1883: "Do not like my drawing lessons. She speaks of nothing but smoothness, softness, breaking the colours, and the lightness of the shadows, till there is nothing left".

Copying work by other artists, however, was to remain part of her informal art education. She regularly visited the South Kensington Museum close to her home and made copies of paintings by Constable and prints she saw in the Library. She was awestruck when she first had the opportunity to go to art exhibitions in central London. She first visited the Royal Academy Winter exhibition in 1883 and, despite having relatives with good art collections, she exclaimed (13 January): "I never thought there could be such pictures. It is almost too much to see them all at once – just fancy seeing five magnificent Van Dyck's [sic] side by side, before me who never thought to see one". She continued to visit galleries regularly through the years and wrote critical observations of them in her journal.

Through her 20s, Beatrix began making studies of plants and animals at the Natural History Museum and learned how to draw what she saw under a microscope. She also developed an interest in archaeology and fossils, but her major passion from the mid-1880s was mycology – the study of fungi. After a decade of collecting and drawing mushrooms she began to speculate about their methods of reproduction and experimented in spore germination, preparing drawings of her observations through a microscope and a paper (now lost) entitled: On the Germination of the Spores of the Agaricineae [gilled fungi]. With the help of her uncle, the chemist Sir Henry Roscoe, she managed to have the essay presented on her behalf at a meeting of The Linnean Society (since as a woman she could not attend herself) in 1897.

In 1890, Potter was to receive her first illustration commission from a greetings card company, Hildesheimer and Faulkner. Her children's books evolved more unexpectedly, from illustrated letters she wrote to the children of her former governess, Annie Moore. The first, to Noel in September 1893, featured a rabbit named Peter. The next day she wrote one to Noel's brother Eric about a frog and later wrote one about a squirrel to their sister Norah. In about 1900, Beatrix copied her letter to Noel to make a rough version of The Tale of Peter Rabbit and set about printing her own edition. In 1902, the publisher Frederick Warne agreed to publish a version with colour images. This was an immediate success and marked the start of a long and successful relationship in which they released two storybooks a year.

Her work with Frederick Warne led Beatrix to a close friendship with her editor Norman Warne, who proposed to her in July 1905. Tragically, Norman unexpectedly died of pernicious anaemia less than a month later and a devastated Beatrix threw herself into renovating a new property, Hill Top Farm in Near Sawrey, near Esthwaite Water in the Lake District. She continued to write one or two new books a year for Warne for the next eight years but her focus began to move towards a new life in the Lake District.

In 1909, through purchasing another Cumbrian property, Castle Farm (near to Hill Top), Potter met and then befriended a local solicitor, William Heelis. After a period of battling her parents' objections to her relationship with a country solicitor, Beatrix married William in 1913 and settled permanently in the Lake District at Castle Cottage. At last, she was able to throw herself more fully into farming. Ten years later she bought a substantial sheep farm, Troutbeck Park, in 1923. Canon Hardwicke Rawnsley (1851 – 1920) introduced Beatrix to the endangered Herdwick sheep breed that had helped to shape the fells through grazing for thousands of years. These hardy sheep could withstand the harsh winter conditions and were taught over generations to remain within their particular part of the unfenced fell. She employed the shepherd Tom Storey, and soon the flocks across the farms she managed were thriving. She did not immediately give up her book work, but the demands of farming on her time and her failing eyesight meant that new works tended to be pieced together from drawings made many years earlier. Her last storybook was The Tale of Little Pig Robinson, published in 1930.

Apart from farming, Beatrix's other major passion towards the end of her life was land conservation, an interest that was also inspired by her friendship with Rawnsley, one of the founders of the National Trust. Beatrix's expanding estate, funded by revenue from her book sales, allowed her to fulfil an ambition to preserve the Lake District's unique landscape and its traditional farming methods. When Beatrix died aged 77 on 22 December 1943 she left 14 farms and more than 4,000 acres to the National Trust. 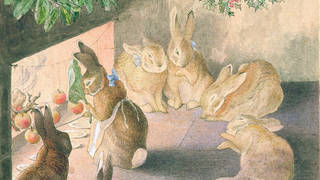