Linnaeus Tripe (1822 – 1902) was a military officer who learned his photographic skills while on leave in England. He learnt from amateurs who considered photography a pastime, but recognised that it could be an effective tool for recording information about unknown cultures and regions.

With few models to follow, Tripe managed to turn his new hobby into a professional practice within the operations of the British East India Company. Reflecting his military discipline as an army officer, Tripe achieved remarkably consistent results despite the Indian heat and humidity, which posed constant challenges to photographic chemistry. Tripe's schooling as a surveyor also lent him certain skills – his considered choice of viewpoint and careful attention to visual details.

Tripe preferred to use waxed paper negatives known as 'calotypes' to make most of his photographs. The calotype process was invented by the British chemist, linguist and photographer William Henry Fox Talbot in the mid-1830s. It used paper coated with light-sensitive silver iodide as a negative, which was fixed in a chemical solution of sodium thiosulphate. The negative enabled multiple copies of the image to be reproduced on sheets of paper coated with light-sensitive silver chloride, exposed in sunlight. Since the fibres of the paper negative became part of the image transferred onto the paper print, the prints had a 'soft focus' look.

When Tripe entered photographs from his Madura series in the 1859 annual exhibition of the Madras Photographic Society, the jury dubbed his photographs "the best in the Exhibition". However, as Tripe was not an amateur, he could not win the gold medal.

The committee valued Tripe's photographs for their informational value and their technical quality. The majority (46 out of 50) of the images he entered were made from paper (calotype) negatives, but the committee felt that his few dry collodion-on-glass negatives showed sharper definition and were therefore more successful. The photographs below were made with a glass negative, which may have made it easier to obtain sharp and focused results.

Retouching negatives or prints was very common practice before the technological advances in photography that came later in the 19th century. This is because the sky often appeared washed out in landscape photographs. Since long exposures were necessary in order to capture detail in the foreground, the sky, much lighter than the foreground subject, was over exposed and appeared stark white. To improve the sky, like many photographers, Tripe often painted clouds or shading onto the negative.

The black and white photograph above shows three entrances to a pagoda – the largest on the left is triangular in structure and covered with images of gods. The sky is full of clouds that have been painted onto the negative. Likewise, in the image of the landscape below, the wide sky features artificially added clouds above the detailed vegetation. 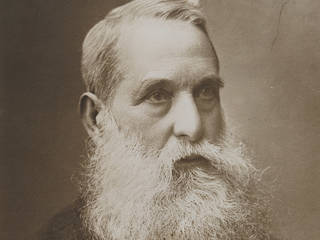