During his 28 years in India, Lockwood Kipling amassed a private collection of Indian popular art that reveals a man with an insatiable curiosity about its history and culture.

Away from his work at the art schools in Bombay (now Mumbai) and Lahore, and as Curator at the Lahore Museum, Kipling was a keen collector for his own family and friends, and on commission for private collections. He also assembled albums of photographs, prints and lithographs, as a way of developing his own understanding of India.

Kipling's attention to local detail is particularly noticeable in his private collection of Indian popular art that he amassed in Lahore over an eighteen-year period between 1875 and 1893. By the time of his retirement in 1893, he had pasted 233 prints, paintings, pen and pencil drawings into an album, along with an additional 37 loose pages of calligraphic pen-and-ink drawings. The subjects of these pictures include scenes from Indian daily life and drama. A number reference popular Hindu and Sikh myths and legends, and views of Amritsar and Lahore. The calligraphic drawings, inspired by sacred texts, portray a variety of animals and birds.

Kipling repurposed many of the images in this album, as well as his vignettes and written sketches, for the Pioneer newspaper and his book, Beast and Man in India (published 1891), which he described as, "a side door into Indian life, thought, and character". Intended to be a miscellany of information and observation, the book was written in, "a familiar manner befitting an everyday, familiar subject".

The album sheds light on Kipling's mind at work, as he sought to understand and express Indian culture across a range of media, both verbal and visual. He annotated some of the images with translations from the vernacular, or with interpretative comments. A number of the drawings are his own copies of the works of others, as if he was trying to master the visual as well as verbal forms – or, as was his preference, their interrelationship.

Kipling's son, the writer Rudyard Kipling, donated the album to the V&A in 1917, six years after his father's death, with a note explaining that it was made, "about 25 years ago of the cheapest and most popular form of native lithograph pictures as sold at the local bazars and fairs of upper India and Bengal". He added, "I am certain that my father's idea would be for the Museum to use or to re-arrange the prints in any way which may be most serviceable to the student". On 1 August, 1917, the Museum's Director, Sir Cecil Smith wrote in response: "We shall be very glad to accept the scrapbook of native bazar prints etc., which were collected by your father, for our Indian section here. We have been paying rather special attention to the development of the collection of Indian paintings and your gift will certainly prove a very welcome addition to it. It is, if I may say so, very gratifying that the names of your father and yourself who have done so much for India should in this way be associated with our Indian Collections here". 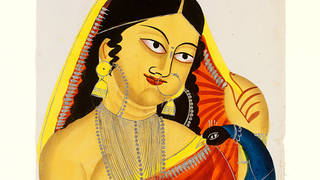 The peacock in this painting may represent the woman’s absent lover, or it may allude to her vanity. 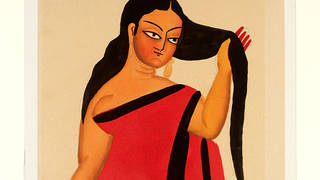