This exquisite example of 17th-century English embroidery was worked by a young girl, Martha Edlin, when she was just 11 years old.

Completed in 1671, the casket is the standout piece among a group of embroideries in our collection which were made, signed and dated by Martha Edlin (1660 – 1725) during her childhood. Her initials, 'M. E.', are sewn on the front in tiny pearls, proudly proclaiming her achievement. These objects were cherished by her descendants for almost 300 years, passed down through the female line. It is very unusual for sets of needlework to stay together like this, and Martha's work has been instrumental in our understanding of needlework education in the 17th century.

Embroidered caskets functioned as both public and private objects, displaying and celebrating the skill of the embroiderer while also providing a private place for storing jewellery, cosmetics and other personal items. Like other caskets, Martha's is fitted with a variety of small compartments and secret drawers and also has a mirror set into the lid. Incredibly, some of Martha's original possessions remained safely stored within the casket, including a tiny manicure set and a miniature tea service. It also contained a selection of her embroidery tools, including a needle-holder and silver bodkin (large needle), engraved with the tiny initials 'M.E'. We know little about Martha's adult life aside from that she married a man named Richard Richmond and had a daughter and granddaughter – through which the embroideries were passed down. The survival of these personal trinkets gives us a unique insight into her upbringing, and how she made and used the casket.

Caskets like Martha's were produced in England between about 1650 and 1695. The decorative needlework panels were worked by young girls as part of their needlework education. Sewing was an important skill for women in the 17th century and was taught to girls from an early age. Plain sewing – hemming and seaming – was vital for the production of underclothes and basic household linens. Only a privileged few, however, were able to afford the time and materials for embroidery and skilled needlework. Girls were often taught by their mothers, but for those with financial means governesses were sometimes employed to assist. As well as being a necessary household skill, embroidery and needlework was a favoured pastime for wealthy women, having been popularised in the 16th century by well-known embroiderers including Mary, Queen of Scots and Bess of Hardwick.

It is likely that Martha's embroidered casket would have been one of the final challenges in her needlework education. We know this because our collection includes two samplers embroidered by Martha at an earlier date. Samplers, sometimes called 'practice pieces', were a way of recording and referencing different designs, stitches and effects, and were often the first stage when learning needlework. Martha completed her first sampler aged eight and went on to create a more complicated cutwork sampler the following year. She then progressed to the casket panels and went on to complete a beadwork jewellery case at 13. This seems to follow the general progression of needlework education at the time.

Caskets could be decorated with a multitude of patterns, but they typically have a set scene on each panel, ranging from biblical, to mythological and pastoral. Martha chose a popular option. The lid of her casket shows the figure of Music, a fashionable lady playing a lute, surrounded with representations of the four elements – air, fire, earth and water. The body of the casket shows the seven virtues – Faith, Hope, Charity, Justice, Temperance, Fortitude and Prudence – on the front and sides. These are all worked in exquisite detail on silk satin panels in coloured silk and metal threads. A variety of stitches have been used to cleverly create different textures, and padding has been added on the lid to create 3D raised work embroidery. Tiny pearls add detail and many of the ladies are shown with miniature pearl necklaces.

Inspiration for designs came from various print sources and the first English pattern book was published in the 1590s. The enduring popularity of these sources means that popular animal motifs tend to reoccur on English embroidery over decades. Grinning lions, unicorns and insect motifs like the ones found on Martha's casket can be seen widely on examples of English embroidery. Martha Edlin's casket is a fascinating reminder of the incredible skill of amateur embroiderers, which are so often unattributed and uncelebrated.

See all the objects associated with Martha Edlin in our collections. 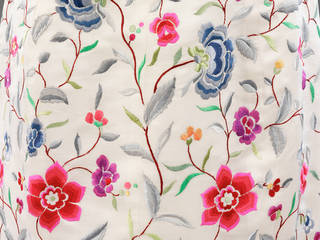