Diverse, dramatic and painstakingly crafted, our costumes from a range of 20th century opera productions capture the ever-evolving spirit of the artform.

One of the most striking examples is the robe worn by the great singer, Feodor Chaliapin, during the coronation scene of Mussorgsky's opera, Boris Godunov, probably for Serge Diaghilev's Russian Opera season in Paris in 1909. Designer Alexander Golovin based the robe on historical sources, making it lavish in detail and embellishment.

Five years later, Golovin's design was echoed in a similar costume worn by Boris Christoff, the most famous Boris Godunov of his day. Images from our collection show Christoff in character looking very stately. Christoff's robe was not as elaborate as that worn by Chaliapin, but was still much more expensive than the Sadler's Wells Opera could afford when it first started producing Boris Godunov in the 1930s. Christoff owned the costume himself, so he eventually donated it to the theatre, where it was reused for further productions.

Oliver Messel (1904 – 1978) was one of the foremost theatre designers of the 20th century. Messel began designing in the 1920s, but first turned his hand to opera in the late 1940s. He won international acclaim for his lavish, painterly and poetic costumes informed by period styles. The essence of these is captured in our collection of his drawings. Although sketchy in style, Messel always knew exactly which fabrics to use and how he wanted the costumes cut and decorated.

In 1977 the D'Oyly Carte Opera Company contributed to the Queen's Silver Jubilee festivities by staging a Silver Jubilee Season at Sadler's Wells. The highlight was a new production of Gilbert and Sullivan's Iolanthe, with silver-themed costumes by Bruno Santini. One of Santini's outstanding designs was the dress of the Fairy Queen, a riot of black and silver synthetic furnishing fabrics, typical of the 1970s, designed to shimmer under the stage lights. The bodice of the dress is shaped to suggest a breastplate but is covered in shining black sequins so that the Queen retains her femininity. The dress, however, divided opinion. Some reviewers expressed disappointment that the Fairy Queen was "trim of appearance, prettily dressed and not at all ridiculous". In Gilbert and Sullivan's first production of Iolanthe, the Queen of the Fairies was presented as a substantial lady in a breastplate and Wagnerian helmet, whose claim to have swung upon a cobweb was amusingly unlikely.

Another striking costume in our collection is the dress by prominent theatre designer, David Walker (1934 – 2008), for the character of Sophie in Richard Strauss' opera Der Rosenkavalier. The opera, in style and manners, is firmly set in the 18th century, so David Walker designed the dress to be recognisable as a period costume but, in its cut and use of materials, an obvious creation of its time. Sumptuously decorated with floating layers and trails of bows and trimmings, the dress cleverly creates an 18th-century silhouette, but without the use of tight corsetry, which could restrict a singer's chest.

Distinguished British artists also feature in our costume collections. Gerald Scarfe is best known as a savagely brilliant cartoonist, but has also designed several theatrical productions in his career (most notably, his design and animation for Pink Floyd's concert tour and film The Wall). His first design for opera was for English National Opera's 1985 production of Offenbach's Orpheus in the Underworld. Scarfe's costume for the character of Pluto resembles the devil, represented as a fashionable mid-19th century gentleman, reflecting the opera's origins (it was first performed in 1858). The dickey (false shirt-front) and cuffs, in red glittering Lurex fabric, are serrated to suggest flames. The forked tailcoat and devil-horned hat are covered with alternating horizontal lines of red and green scales. The outline created by the stiffened, shaped tails reinforces the idea that the wearer is not quite human. The tails can be fastened onto the front of the coat, unfastened to trail behind, or become a useful actor's accessory, held by the wearer.

Another artist to successfully make the transition into theatre design is David Hockney, whose bold sense of form and colour are admirably suited to the stage. Hockney's designs for Stravinsky's opera, The Nightingale (based on Hans Christian Andersen's story of the same name) were highly stylized, limited to shades of blue, black and white, reminiscent of a Chinoiserie Willow Pattern design. A fine example is the costume for the Bonze, a Buddhist monk, whose robes and distinct headdress help convey a sense of authority. 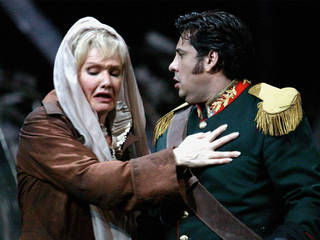