Stained-glass windows, made up of coloured and painted glass pieces held together by lead strips, were especially popular in Europe in the period between 1150 and 1550, when they were a prominent feature of cathedrals and other churches, as well as city halls and homes for the elite. Its translucent qualities made stained glass especially popular in religious contexts, where large windows with scenes from the bible and the lives of saints could animate a sacred space with colourful glimmering lights, and subtly change the atmosphere depending on the time of day, and the changing of the seasons.

Much of what we know about how medieval stained glass was made comes from the treatise On the Various Arts (De Diversis Artibus in Latin), a text written in the early 12th century by a German monk who used the pseudonym Theophilus. He describes the basic steps needed to make sheets of coloured glass, and how to use these sheets to create stained-glass images. Apart from minor innovations, the techniques of stained-glass making have barely changed since Theophilus' time.

The main ingredients for making glass are sand (silica) and ash (alkali). When heated together, they form a more or less homogenous viscous mass which transforms into glass when cooled. From about the year 1000 onwards, glass makers largely used woodland ash in glass production. This resulted in glass which, although durable, was not always resistant to weathering and decay. Stained-glass windows, often subject to breakage, needed regular maintenance, and had to be repaired and restored regularly. They often survive only in fragmented and altered form.

In the Middle Ages, glass makers used two types of methods to produce sheet glass. When following the so-called broad sheet or muff method, they took a bubble of still malleable glass onto a blowpipe and then worked it into a cylinder. This cylinder was then cut open along its length, reheated and pressed flat into a sheet.

An alternative way of making sheet glass was the crown method. The glassmaker transferred a bubble of glass from the blowpipe to a metal rod called a pontil. The bubble was opened up and spun around the pontil. The centrifugal forces caused the hollow bubble to flatten into a round disk, the crown, which was thicker at the centre than at the edges. Stained-glass painters rarely made their own sheet glass. They bought it from merchants who dealt directly with the glasshouses. These were often located near forests and woodland, close to the raw materials they needed for their work.

To colour glass, the glassmaker added powdered metallic oxides to the basic sand and ash mixture during the melting process. This resulted in tinted glasses known as pot-metals. Not all glass was, however, coloured throughout. Pot-metal red glass, also known as ruby, was very dark and not translucent enough for the light to pass through. Medieval glassmakers creatively solved this challenge by dipping colourless 'white' glass into a pot of molten red and working the two together. The result was so-called 'flashed glass', which consisted of a thinner, streaky layer of red on a colourless base. Coloured glass was much more expensive than plain white glass, and therefore often reused in stained-glass windows.

The process of making a stained-glass window began with a design. In medieval times, this was known as the vidimus, the Latin word for 'we have seen'. Before paper became more readily available around the year 1400, stained-glass painters drew a scaled-up design, sized to fit the actual window opening, onto a wooden trestle table coated with chalk or whitewash. This drawing was marked with letters and symbols to indicate the colours of the individual pieces of glass to be used. It also showed the most important painted lines and highlights the glass painter had to include. The drawing on the table so served as a guide for the person cutting the glass, and as a guide for the glass paint. Finally, it was used as a workbench to assemble the window.

We don't know exactly how the design process of medieval stained-glass windows worked. Theophilus implies that the glass painters and makers were also the designers. In many cases this must have been the case, while in others, the person who commissioned the work supplied the makers with sketches drawn by other artists such as panel painters. Evidence for this increases in the 15th century. In about 1508, the Southern German painter Hans Baldung Grien supplied a sketch for a stained-glass window to be made for the Convent of Hohenberg. This sketch includes written instructions for its makers. With the increasing availability of paper, full-size cartoons for stained-glass windows would become the norm. They could be saved, reused and handed down from glazier to glazier. This made stained glass an exceptionally collaborative art.

Once a decision on the appearance and layout of a stained-glass window was reached, the glazier or glass maker selected and cut the glass. In the medieval period, the sheets of glass were cut into smaller pieces by applying a heated iron to their surface. The glass maker then worked the rough shapes with a so-called 'grozing' iron, a metal slot or hook into which the edge of the glass was slipped and chipped into shape. From the 16th century onwards, diamond cutters for cutting glass became more widespread. They left much cleaner edges, and helped the makers achieve their shapes more easily.

Once the glass was cut into the desired shapes, the most skillful part of producing a stained-glass window followed: painting the glass. Glass painters used so-called vitreous or glass paint, which had to be fired to adhere to the glass piece. It was made of iron or copper oxide, ground glass, gum arabic, and a binder such as water, wine or vinegar. The paint, whose colour varied from grey-black to brown, could be diluted to various textures and consistencies, depending on the desired effects. The painters used a dense ink-like consistency for basic trace-lines, and a thinner wash to achieve shading and modelling. They applied the paint with brushes made of various animal hair. Sticks, needles, quills, and fingers could also be used to texture and scratch out the paint to add depth, and to control the light passing through the glass.

To assemble a stained-glass window, the stained-glass maker finally laid the pieces of coloured and painted glass out according to the design, and fitted the edges of each piece into H-shaped strips of lead, called cames. These strips were then soldered to one another so that the panels were secured. They not only held the single glass pieces in place, but were an integral part of a window's design. Once the cames were in place, the maker then rubbed putty into the spaces between the glass and the lead to make the window panel waterproof. Finally, the panel was attached with lead strips to the armature or ferramenta – the iron-work set into the window opening to support the weight of the finished window.

In the 14th century, a highly important innovation appeared in the painting of stained glass: silver stain. This solution of mainly silver nitrate, which gave stained glass its name in English, can be applied with a brush, like glass paint. It is applied to the reverse of the glass and burns into the surface when fired. The colours of silver stain range from pale lemony yellows to deep dark oranges, and so offered stained-glass painters exciting new possibilities for adding colour at the stage of painting the glass.

Monochrome paintings in neutral colours, also known as grisailles, existed throughout the medieval period, but used in combination with silver stain, they became very popular, especially in the 15th and 16th centuries. They often took the form of roundels, consisting of only one piece of glass, which were inserted into the windows of residences and other secular spaces such as for example city halls.

Around the middle of the 16th century, new vitreous enamel colours were discovered. Like silver stain, these could be painted on to the surface of colourless glass. The new green, blue and purple colours all used ground glass as flux, and helped glass painters to achieve increasingly complex compositions, aligning stained glass much more closely to other forms of painting. 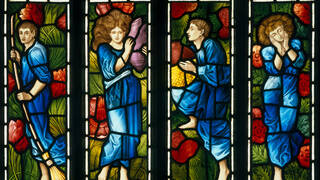 Visit the shop
Background image: Panel showing a King from a Tree of Jesse window, about 1210 with later restorations, probably Champagne, France. Museum no 6D-1881. © Victoria and Albert Museum, London