Have you been to Glastonbury Festival? Are you a hardcore regular or was last year your first? Maybe you went to the very first one back in 1970? Or perhaps you enjoy watching the BBC coverage from the safety of your own sofa.

Either way, in celebration of this year's 50th anniversary of Glastonbury Festival, we want you to help us create the ultimate people's playlist by adding a favourite song from your Glastonbury experience. Maybe it was Move On Up by Curtis Mayfield back in 1983, or Morning Glory by Oasis in 1995, a pregnant Beyonce performing Crazy in Love in 2011, or any of the songs from David Bowie's majestic set in 2000.

To get you started, we asked some V&A staff to nominate their favourite performances.

"It's very difficult to choose one track! But Stormzy's Blinded by Your Grace from last year springs to mind. What a moment! Incredibly emotional to watch. A monumental performance with spectacular stage design".

"I went in 1995, and ditched Pulp (I had seen them a few times already) for Portishead with my brother. Glory Box in the Acoustic Tent".

"If I had to choose one song, it would be Beneath the Southern Cross by Patti Smith on the Pyramid Stage in 2015. But the highlight of this performance was actually a surprise appearance by His Holiness The Dalai Lama. Patti got us all to sing a rousing rendition of 'Happy Birthday' to the Dalai Lama, who was shortly to turn 80. It felt like a really intimate moment despite there being several thousand of us".

How to add your song to the Glastonbury Festival People's Playlist 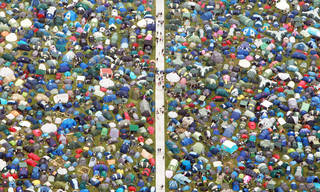