The V&A is the custodian of an important and rare collection of nearly 600 textile fragments and over 70 ceramic and Buddhist art objects, dating between 200 BC and 1200 AD, that were recovered from the Silk Road in Central Asia by Hungarian-born, British archaeologist Sir Marc Aurel Stein (1862 – 1943).

Many of the textile fragments appear to be scraps – cut-offs from larger pieces, or rejects – but closer examination reveals that most once formed part of objects that were offered as gifts in religious ceremonies. These objects collectively demonstrate the intensity of trade and cross-cultural exchanges between East and West in north western China during the first millennium AD.

Trade routes through the arid Taklamakan Desert in the far western region of China had already been used by the Chinese Shang (1500 BC – 1046 BC) and Zhou (about 1046 BC – 256 BC) dynasties and were fully established under the Han dynasty in the second century BC. Despite its name (coined in the 1800s), silk was only one of the many commodities carried in both directions. Religion, language, design and technology, innovation and animals, all crossed Eurasia along the routes, through the Tarim Basin, one of the most hostile areas in the world.

Rivers from the surrounding mountain glaciers fed oases settlements on the borders of the Taklamakan Desert and provided a welcome respite for weary travellers. At least 36 kingdoms or city-states existed in the Tarim Basin during the first millennium AD. However, as rivers began to change direction and dry up, trade shifted from the Silk Road to maritime routes as navigation improved. Gradually the caravans disappeared, leaving dead cities immaculately preserved by the dry climate. The re-discovery of the Silk Road is one of the triumphs of modern archaeology and Sir Aurel Stein was prominent among its re-discoverers. 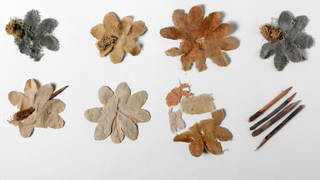