Michelangelo's sculpture of David is one of the most famous objects in the history of art, and the V&A's cast of David has been a favourite with visitors since its arrival in the Museum in 1857. Donated by Queen Victoria, this cast has a fascinating history and continues to inspire artists, designers and film-makers today.

Michelangelo Buonarroti (1475 – 1564) was in his early twenties when he was commissioned to create a statue representing the biblical hero of David. He was offered a colossal block of marble which had been previously worked by two other artists, Agostino di Duccio (in 1464) and Antonio Rossellino (in 1475). Both artists had abandoned their work after noticing imperfections in the marble's grain, but despite these flaws, Michelangelo took up the monumental challenge of carving the figure.

David was initially intended for the roof space of Opera del Duomo, the cathedral in Florence, but, on seeing the finished piece, the council committee chose instead to display it outside the Palazzo Vecchio, the town hall, at the Piazza della Signoria. Installing the figure in this public square required a huge amount of effort, and involved suspending the figure on a wooden scaffold. It was then pulled on a series of tracks from the Duomo to the piazza where it was installed on a marble plinth and finished off by Michelangelo. Original gilded details on the leaf garland, tree trunk and sling have all now sadly been lost.

The finished statue was popularly known as 'The Giant' and quickly became a symbol of liberty for the Florentine people. However, the statue's vulnerable position in the piazza exposed the sculpture to weathering and vandalism, and so, at the beginning of the 19th century, the concerned council chose to move it to a safer location for preservation. In 1847, to determine a suitable place to move the marble original, The Grand Duke of Tuscany, Leopold II commissioned Clemente Papi, the royal bronze founder and cast maker, to produce an exact replica in bronze that could be used to test a suitable location. However, in the end the sculpture was reproduced in plaster, and so begins the history of our cast.

To cast the figure, Papi had to first create a mould. A piece-mould has an inner and outer layer, with the inner made up of several small mould pieces which are then held together and supported by the outer 'mother mould'. The complexity of David's form required Papi to individually shape over 1500 mould pieces, which together all fitted inside the mother mould like a giant jigsaw puzzle. The small gap between each piece leaves a network of slightly raised seamlines and if you look closely, the evidence of this moulding process can still be seen on the surface of our David. To avoid damaging the original, the marble was sealed with oil, wax or soap to enable the plaster pieces to be later released from the surface. Papi was aware of how precarious the casting process was, which explains why only one complete mould has ever been produced from the surface of Michelangelo's original David.

Papi's cast was placed in several locations in the centre of Florence in the quest for a suitable location for the marble original, including under the Loggia dei Lanzi and in the Piazzale degli Uffizi, but eventually the Accademia di Belle Arti was chosen as the final location. Extraordinarily, the marble statue remained packed in a wooden box for 25 years until it was installed in the new purpose built semi-circular gallery at the Accademia in 1873. The original cast still survives and is today displayed at the Gipsoteca art school at the Istituto Statale D'Arte in Florence.

A few years later, the Grand Duke commissioned Papi to create a second full-scale plaster replica of David. This second copy was to be delivered to Queen Victoria as a gesture of good will after the Grand Duke had vetoed the export of a painting which the National Gallery in London had hoped to acquire. It is this copy that is now on display in our Cast Courts.

The cast was packed in three wooden crates for travelling to England. The cost of transportation ended up totalling more than the cost of the cast itself. Papi travelled from Florence to the Port of Livorno (known as Leghorn in English) with the crates where they were then loaded onboard the ship, The Cheshire Witch. When the cast arrived in England, Queen Victoria donated it as a royal gift to the newly constructed South Kensington Museum (now the V&A). Large, modern exhibition rooms in the newly built Museum offered an ideal space in which to display the gigantic five metre high figure, and the cast was given a prominent position in a gallery comprising Italian art. The Museum's then Director, Henry Cole, witnessed the assembly of the cast on the 21st February 1857 and noted in his diary that "… Mr Cowper remained till 4.30 & saw the legs of David erected, not without jeopardy...".

David at the V&A

In 1873, when the new Architectural Courts (today known as the Cast Courts) were constructed, David was moved to the East Court where he has been on display ever since. This gallery has traditionally housed plaster casts of Italian origin and he was originally framed by the monumental cast of Jacopo della Quercia's great arch from the Basilica of San Petronio, Bologna (1886). A few years later he was moved to the other end of the gallery, and in 2012 he was moved to a more prominent position in the central axis. Moving the cast was a slow, complex, and nerve-wracking operation involving a team of technicians and a large wheeled scaffold structure. During the move, the team noticed that there were traces of soap on the lower edge of the plinth indicating that the cast had been previously drawn across the tile floor on wooden planks lubricated with soap.

Our cast of David is perhaps not as famous as the original but is still highly important, as it demonstrates the profound skill and ingenuity of the cast makers and captures the condition of the original marble as it was in 1847, when the mould was taken. X-rays have revealed that the metal rods supporting the legs are arranged similarly to human leg bones and cleverly support the entire figure so that it can stand alone on such a scale. Papi also designed the cast so that it could be dismantled and reassembled, which explains the visible joints.

Papi's original moulds do not survive, but new moulds have been made at various points by other cast makers. When Papi's cast arrived in London in 1857, Domenico Brucciani, an Anglo-Italian London-based cast maker, took the opportunity to make a mould from the cast. He then made copies of the head, nose, eyes, ears and lips, some of which are in our collection. Remarkably, their corresponding moulds still survive at the British Museum, and have been used to produce multiple copies of David's facial features for sale in their shop. Casts of David's striking facial features can be found all over the world and are continually studied by artists working in a range of mediums.

Full scale reproductions of David in plaster and bronze can also be found in museums and art schools around the world including, The Pushkin State Museum of Fine Arts in Moscow, The Museum of Art and History in Brussels, The Museum der bildenden Künste in Leipzig, Germany and Pennsylvania Academy of the Fine Arts.

When Queen Victoria first encountered the cast of David at the Museum, she was apparently so shocked by his nudity that a proportionally accurate fig leaf was commissioned to cover the genitalia. The leaf was kept in readiness for any royal visits, when it was hung on the figure using two strategically placed hooks. The original fig leaf, made by Papi, has sadly been lost but we have a version, made in 1857, in our collection.

The cast of David remains one of the most popular objects in our collections, and continues to inspire many artists, designers and creatives. In 2016 David was scanned by the team working on Ridley Scott's film Alien: Covenant, which was released in 2017. Using a state of the art LiDAR laser scanner, millions of 'points' on the statue were captured from multiple angles, enabling every inch of David to be captured. This data created an exact high-resolution mesh and any gaps in the scan were filled in with digital photography. Once cleaned, the scan was sent to a 3D sculpting company where David was reproduced in several large polystyrene slices which were then reinforced with a metal armature, pieced together and then painted to produce a highly accurate replica. The film has since been watched by millions of people across the world, with David centre stage, demonstrating the enduring legacy of this iconic sculpture and the ongoing relevance and interest in replication in the digital age.

Find out more about Michelangelo's David – including fascinating discoveries made by our Sculpture Conservator, Johanna Puisto, in the V&A blog. 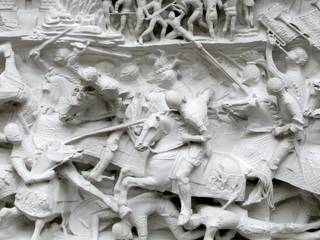