Valérie Belin's series 'Reflection', commissioned by the V&A, is comprised of ten large-scale works that explore street photography, drawing on images from our historic photography collection that depict shopfronts and window displays.

The seductive nature of the street has drawn attention throughout the history of photography. Well-known practitioners such as Eugène Atget, Walker Evans and Lee Friedlander, have all created works that respond to the atmosphere of the urban environment.

During her research for Reflection, Belin viewed photographic works in our collection.

The Worsinger albums were a really exciting discovery; the pictures feel like they might come alive, as if the mannequins would pick up the bags beside them and put on the shoes. Another discovery was the work of Robert Brownjohn, an American graphic designer who photographed the signage and typography on London streets in the 1960s. He collected these vernacular visual references as inspiration for his own work. This interested me because I too like to photograph aspects of urban life when I travel, to use as material later in my process.

Throughout her recent travels, Belin photographed streets and shopfronts in American cities as material for building up layers of imagery. She drew upon these thousands of photographs to create the series Reflection.

Themes of reflection, depth, representation, artifice and identity are echoed in the fragmented visual narrative. The result appears like a dark fantasy, reflecting the spectacle of consumerism. This project continues her ongoing inquiry into the tension between the real and the imaginary, interrogating stereotypes and encouraging viewers to confront what they see.

This commission was supported by the Photographs Acquisition Group. 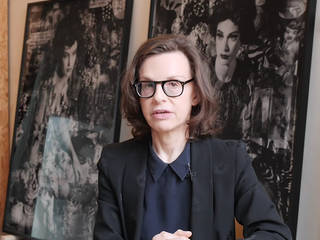