Vivienne Westwood was known for flouting fashion rules and her innovative footwear designs are no exception. Enjoy this selection of shoes, boots and sandals from our Fashion collection, which span over two decades of Westwood's career.

In 1974, Vivienne Westwood and Malcolm McLaren's shop at 430 King's Road, London, underwent its third and most provocative incarnation, becoming SEX. The shop was a loud expression of the couple's interest in social disruption, offering a mix of modified and off-the-peg fetish wear (previously only available via mail order in the UK). To help stock the shop, they created clothing and footwear that allowed their proto-punk clientele to take militantly transgressive looks out onto the street. With their spikes, buckles and shiny red PVC, the stiletto shoes available at SEX referenced a world of 'deviant' sexual practices, an eye-catching attempt to shock. Shoes like these helped complete a look made famous by Jordan, the store's head shop assistant, who became notorious for wearing unashamedly sexual outfits on her daily train commute to London from the south coast.

Bondage boots were produced by Westwood and McLaren for Seditionaries, the name of the shop at 430 King's Road from 1976 to 1981. They were designed to be worn with other clothes from a range called 'Bondage', a now-archetypal punk look that fuses references to army combat gear, motorcylists' leathers and fetish wear. While referencing the 'biker chic' phenomenon created by 1950s Hollywood pin-ups Marlon Brando and James Dean, the boots also hark back to the utilitarian leather designs of men's fashion in the Georgian and Victorian eras. Clothing sold at Seditionaries was worn and popularised by the Sex Pistols, the punk band McLaren had launched in 1975. This kind of black-leather boot was an essential component of the band's unapologetically aggressive, nihilistic style.

Pirate (Autumn/Winter 1981–82) was Westwood and Malcolm McLaren's first catwalk collection. It featured a number of looks that helped define what is now known as the 'New Romantics' movement in fashion and music. The collection was partly inspired by Westwood's interest in portrait paintings of the 17th and 18th century – the square-toed Pirate ankle boots certainly have a strong historical nod to the Jacobean era of the early 17th century. Historicism also drove the Pirate collection's signature footwear look: the turn-topped, buckled-leather knee boots made famous by the 'dandy highwayman' character in the music video for Adam and the Ants' Stand and Deliver (1981). Like many of Westwood's designs, however, the ankle boots fuse historicism with a thoroughly modern element. Sporting not one but three tongues, their design prefigures the celebrated three-tongued trainers of Westwood's Witches collection (Autumn/Winter 1983 – 84).

The corded Rope sandals were created for Westwood's collection Punkature (Spring/Summer 1983). Partly a continuation of work done over the last couple of years that had referenced native and ethnic style, Punkature featured 'hillbilly' garments made from pre-distressed fabrics. Pushing at the limits of what constitutes viable footwear, this 'no-uppers' sandal design clothes the foot using the minimum of materials: a rubber sole is held onto the foot with cord that, when pulled and tied round the ankle, activates its worn shape. The idea for this sandal apparently came from reading about people in Brazil making shoes out of rubber tyres. It's also easy to see a link with the Roman 'solea' – a house shoe that consisted of a pad of leather or matting held onto the foot with leather straps.

These men's velvet slippers – with their 14-centimetre-high wooden soles – feature one of Westwood's most recognisable and celebrated footwear silhouettes: the Rocking Horse sole. First introduced in Mini-Crini (Spring/Summer 1985), a collection that was full of enjoyable structural oddities, this design demonstrates Westwood's love of taking things to the extreme. The platform sole was originally created in order to achieve 'poise and elevation', as well as (via its rocking motion) to reflect and enhance the movement of Mini-Crini's stand-out garment – the bell-shaped 'mini-crinoline' skirt. Shoes made with this feature are apparently surprisingly comfortable, "You rock along when you walk in them", according to Westwood. They were inspired by 'okobo', the traditional Japanese wooden flip flop-style clogs worn by geishas, whose platform soles are designed to prevent the wearer's kimono getting wet or dirty.

By far the most famous of all Westwood's footwear designs are the excessively high platforms created for her Anglomania collection (Autumn/Winter 1993 – 94). The Super Elevated Gillie platforms suggest a reworking of historical ribbon-lace styles from the 18th and 19th centuries. They were the latest in a series of platform silhouettes by Westwood – part of the designer's quest to generate a new form of elegance for the modern age. Westwood added extreme height to the shoes for more than just dramatic effect, commenting that, "shoes must have very high heels and platforms to put women's beauty on a pedestal". The particular pair in our collection, in blue mock-crocodile, will be forever associated with the Parisian catwalk show for Anglomania, when they were worn by a young Naomi Campbell. She courageously took to the runway and was foiled almost immediately by the shoe's 30.5cm heels – falling, giggling, slap onto her bottom.

Find out more about Vivienne Westwood. 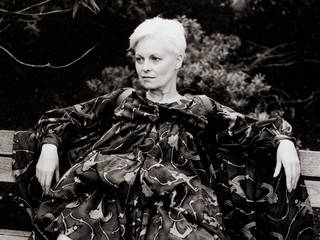