Comic book space was a problem. As for quantity I had no idea how many thousands I’d accumulated. I’d already had two major moves lugging the collection up and down too many flights of stairs. The flat I bought into with Shelagh was near perfect. She was a blue-eyed documentary editor with a lovely touch of an Irish accent and a matching laugh. She’d been a friend’s girlfriend. They split up and she found the gem of a flat in West Hampstead, cheap but more than she could afford. That’s where I came in. I had feature film money. Earnings in documentaries could not compare. It was just around the corner from Lindsay.

However, after a few weeks I felt I did not belong. I wanted to return to the Worlds End. The change to North London was far greater than between Edith Grove and the Cape Town I was chased out of. 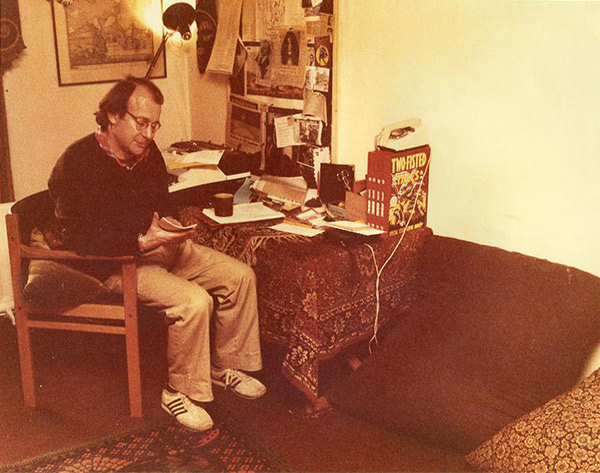 Visiting my old haunt I bumped into my ex landlord. The female American film editor had moved out of my old flat. Quick as The Flash I whipped out my Wells Fargo cheque book. I was moving back.

I let Shelagh down badly. Shelagh’s ex boyfriend got roped into helping me to move. He had a van. He also had an infamous father – according to my lexicon. I met the father at a party. He wore a declamatory red tie and looked like a suave off-duty Humphrey Bogart – as cool as the cigar he waved. This was the schoolteacher and Communist Party activist responsible in the 1950s for the banning of American comics in Britain. The leftwing Peter Mauger was doing in England exactly what the rightwing rabid anti Commie Senator McCarthy was doing on the other side of the pond.

While I was in the bath which was in the kitchen in my pokey Chelsea flat I heard an awful noise. As I flung myself out of the water the ceiling collapsed. I missed being obliterated by falling masonry by inches. Fortunately there were no comics in the vicinity.

Five weeks later I got evicted from my Chelsea haven. I fought to stay but lost the case. The flat was condemned. I put the comics into storage. A month later the younger Mauger was back with his van. I moved into Holland Park as a sitting tenant. There we were again lugging comic book boxes up to the third and fourth floor. This time there was no lift.

I relished the idea of the son of the Commie comic book hater in collusion with me.

A couple of years later I had another lucky escape. Piles of comics were everywhere including the hallway directly under a fuse box. I chanced to walk past at the critical moment. I heard something before I saw anything. I swung round. Sparks were showering onto the comics. Seconds before the hint of flame became fire I managed to plunge the flat into darkness and save the comics.

The Dickensian landlord had the flat rewired. Things seemed safe. I did not let up on acquiring more comics.

At the top of my stairs blocking out the sunlight was a gigantic lead storage tank which supplied water to the entire household. I never liked the look of it but the landlord wasn’t concerned. Signs of rust were evident. In the middle of the night came the sound of something breaking. Sweeping down the stairs was a deluge of water. Miraculously there were no comics in its path. I phoned a friend. He came running. He tied the ball cock up above the water and stopped the flow. We all needed a drink and something stronger. The landlord was notified and a smaller water tank was installed. It did not leak. Years later as the flats below mine were sold off the owners had their water systems updated and my place stopped being the supply point for the whole house.

The sitting room was warmed by an antiquated Aladdin paraffin heater. Lindsay had the same kind of contraption in his dilapidated basement flat. Once a week, the paraffin truck would come by. The driver would park and ring a large brass old-fashioned school bell. Everyone would hurry out with empty cans and wait for their turn at the pump at the back of the truck.

One chilly day – it was lucky I was in the sitting room – flames spurted out of the paraffin heater reaching almost up to the ceiling. I took a kitchen cloth and wrapped it around my hand, grabbed the curved handle on the top of the contraption and lifted it onto the stone hearth. I got a bucket of water and doused the flames. Not one comic book was singed. I was shaken up by that narrow escape. A few years later paraffin heaters were declared illegal.

If I was more paranoid than I am I might have suspected that the world was conspiring to get between me and the comics. Eventually it all went from bad to worse but that occurred years later when the collection was well multiplied in quantity and substance.

Nonetheless, a lesson had been learnt. Comics needed to be more judiciously kept out of harm’s way which had become somewhat of a burden. I contemplated putting some into storage but I couldn’t take to the idea. But something had to be done. I couldn’t face finding a bigger place. I had two floors in Royal Crescent. That had to be enough. I had to make do. I couldn’t afford another move and a bigger place. The money I earned was earmarked for building the collection. That was indisputable. But the need for space was irrefutable.

I embarked on a campaign. To begin with I targeted my long serving antique settle. I ripped out the bulky floor level cross beam, broke it up and watched it burn in the chunky stone fireplace put in by the previous resident. I got five boxes into the new space – a mere dent. I’d made a home for about 600 comics and ruined my only piece of antique furniture. Something more drastic was required.

Vandalising the settle was followed by a greater obscenity – a cultural hara-kiri. I needed to cull the collection. That was it.

Up to this point I was an avid collector of Marvel comics. I was there from the start with the Amazing Spiderman. I had almost unbroken runs of Thor and Daredevil, X-Men, Fantastic Four, Hulk, Silver Surfer, Doctor Strange, Conan the Barbarian and Iron Man.

It was a painful decision, but something needed to be done. A dealer came and they all went, in one go! The logic behind my choice was that Marvel Comics did not need my help. I had to remind myself that I was not investing in comics. I was not driven by money. One day I would find a good home for the comics.

It was clear that Marvel Comics were fashionable, collectable and headed for endless reprints and destined for the movies. Most collectors would have treasured them more than I could. My mission was something else. Mine was the less travelled path of finding and acquiring items that might otherwise be lost forever. I parted with about 3000 comic books for a derisory sum.

I gave the son of a friend of mine the X-Men number one as a birthday present telling him not to sell it because it would become a much sought and extremely valuable. I occasionally see that boy, now a man. He is ashamed that during a druggy period he sold X-Men # 1 for £200.

I wasn’t done yet. I gave a visiting plumber my entire stash of Heavy Metal translated from French, bigger in format than the standard sized American comic. That was a brutal act of mine. Heavy Metal contained some of the finest, sexiest European strips produced. Nevertheless I held onto the barrier breaking Barbarella and the exquisite Saga de Xam and the Evergreen issue with Phoebe Zeit–Geist. These oversized items survived the cull by some kind of act of exemption.

Next were the Westerns. I decided I had too many of that genre. That did not include titles like Roy Rogers and Red Ryder, Gene Autry and Zane Grey plus any Hillman and Quality publications straddling the 1940s and 1950s. I targeted the 1950s and 1960s television series such as Bonanza, Gunsmoke, Buffalo Bill Jr. and Lawman – all published by Dell. This discarding decision was despite the fact that many of them had good artwork and good stories. Though derived from the television series mostly they had been reinvented with original storylines. How I could I have been so idiotic, selling them off cheap for money I didn’t need? Was the spectre of Lindsay Anderson present? He abhorred the comics en masse and his attitude to television was not much different. He was pretty derisory about The Prisoner episode I worked on. Lindsay was a graduate of the documentary movement. When making up crews for his features we tried to find technicians from documentaries in preference to the feature film industry. That’s how I initially fitted in. I had a foot in features and documentaries.

Not only was I a fool, I was a cultural snob which stretched from film into comics and that’s where I lost out.

When the problem of space arose again, I found a less maddening solution. Above the entrance door to my flat was a huge space of hallway. With a bit of carpentry jiggery-pokery I had a solid floor built and absorbed the hallway space into my flat. The floor had to be strong enough for the weight of paper. It gave me sufficient space which served me well until the comics got shipped out to the museum.

I wonder when you are going to give another talk at the V&A Mr Rakoff?