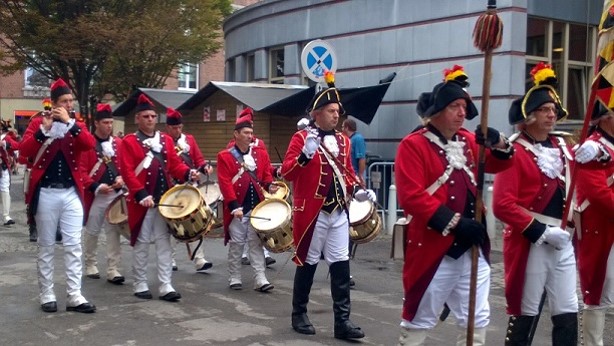 Today we have a guest post from Liz Miller, one of the Europe Galleries Curators, recounting how a recent holiday to Liège called to mind some key features of the project.

The Belgian city of Liège lies about an hour by train to the east of Brussels. Even on holiday there is no getting away from thinking about the Europe Galleries we are now starting to install. Liège art gallery, bal (beaux arts de Liège) is showing until the 13th of September an exhibition called Jeux de Miroir (Mirror Games) which combines paintings from their own collection with ones of a similar, or related subject, from the art gallery of another Belgian city, Tournai. The exhibition grew out of the fact that while Tournai owns a magnificent equestrian portrait of Louis XIV by Charles Le Brun dating from around 1668, the Liège collection includes an equally glorious – in a different way – full-length portrait of Napoléon Bonaparte as Premier Consul.

The painting of Napoleon is by Dominique Ingres and dates from 1804. The impact of these two towering historical figures on European art and design features prominently in the Europe Galleries and they are also the subject of chapters in The Arts of Living: Europe 1600 to 1815, the book published to accompany the galleries.

Looking at the two paintings side by side in Liège was a lesson in how far the expression of power through dress had changed between the 1660s and 1804. Both paintings follow a similar format in showing behind the subject, the conquered city to which the paintings now respectively belong. While Louis XIV sits impassively on his rearing horse, the epitome of the Baroque, in a coat dripping with ribbons and gold lace, wearing a long wig topped with a hat covered in red ostrich feathers, Napoleon wears a luxurious but otherwise sober red suit edged with neoclassical gold embroidery. Napoleon’s head is uncovered and his own hair cut fashionably short.

The history of hair styles is not a topic we have tackled directly in the Europe Galleries, but visitors will be able to trace it for themselves within the chronological organisation, in the numerous prints, sculptural busts and paintings of people on show.

My art gallery visit was not the only encounter that conjured up South Kensington. Witnessing events held in Liège on the 15th of August is the nearest I may ever come to knowing what it was like to be in the crowd at the Ommegang procession in Brussels on 31st May 1615.  Part of that Ommegang (Dutch for walk around) is depicted in one of the paintings in the Europe Galleries.

The focal point of the Ommegang in 1615 – as in every other year before it was abolished around the time of the French Revolution – was a full-length statue of the Madonna and Child housed in the church of Our Lady on the Sablon in Brussels. The painting which represents this portion of the procession is now in the Prado Museum in Madrid. Sablon refers to an area of sandy ground where the Brussels guild of crossbowmen practised their shooting skills and held competitions. It was also the location of the guild’s church where the statue was housed throughout the year.

A similar procession takes place in Liège every year on the 15th of August focussing on the Black Madonna of Outre-Meuse. Outre Meuse is a district in Liège located between two branches of the river Meuse. The Black Madonna of Liège is a full length statue of the Madonna and Child housed in the church of St Nicholas.

The 15th of August is when Catholics celebrate The Feast of the Assumption of the Virgin Mary as they  believe this was the day the Virgin was taken up to heaven. In Liège the statue is taken out of the church and carried through the narrow streets to an open air mass and then carried back to the church just as the statue was carried out of, and back to, Our Lady on the Sablon on the day of the Ommegang.

… although they were on foot not on horseback, like this drummer in the V&A painting.

The outfits may have changed but the task of managing the smooth-running of the procession and ensuring public safety is still a very necessary one. In Liège this was carried out by Belgian policemen and women in fluorescent orange t-shirts and bullet proof vests rather than by men in ruffs on horseback.

The oil painting of Brussels Ommegang of 1615 reflects a deeply religious government and society. The break with the past brought about by the French Revolution was epitomised by a piece of printed ephemera I saw in Liège, in an exhibition devoted to 1000 years of architecture, art and history at the church of St James. A single sheet of text, it announced the auction of furniture and other moveable property from the church of St James on the 14th August 1798. The date on this advertisement was actually given as 27 Thermidor Year 6 using the new Revolutionary calender – another sign of the rupture from previous norms.

It so happens the Europe Galleries are being installed in reverse chronological order beginning with the room that includes a display on the impact of the French Revolution on design especially for ceramics and textiles. Installing the Ommegang painting, which requires eight people to lift it, will come towards the end of the installation process, when summer holidays will be a fading memory.