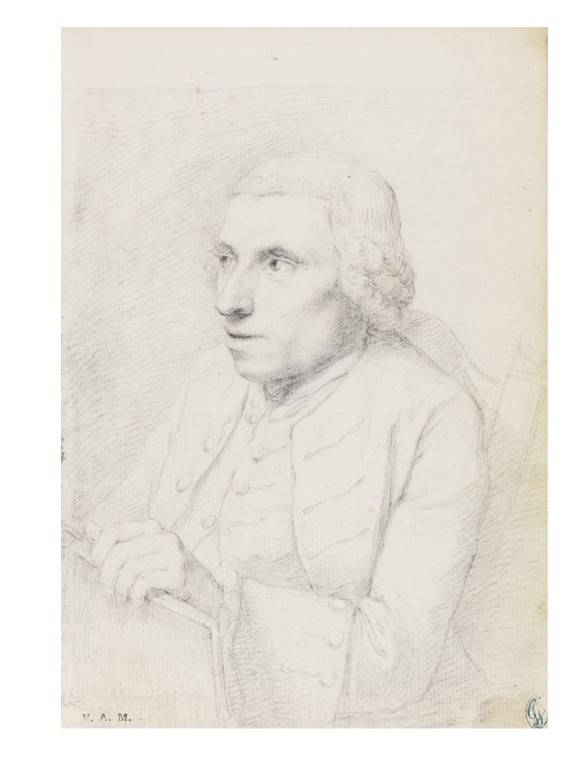 Today our moment of ‘birthday-prompted’ attention is focused upon the artist, architectural draughtsman and antiquary Charles-Louis Clérisseau (1721-180).

Clérisseau has been described as creating a vital link in the chain of architectural excellence that prevailed in Europe during the 18th and 19th centuries.

He was sent to study at the French Academy in Rome in 1749, where he worked with the artist Giovanni Paolo Pannini. However he left the Academy in 1754, following a dispute with the Director.

The following year he happened to meet the young Scottish architect and neoclassical designer Robert Adam and came to be employed as his draughtsman. Adam later described the great influence Clérisseau had on him, particularly in terms of recognising the importance of knowledge in guiding future designs and styles:

‘ he rais’d my ideas, he created emulation and fire in my Breast, I wish’d above all things to learn his manner and to have him with me at Rome, to study close with him and to purchase of his works’.

Clérisseau was in fact responsible for many of the illustrations in Adam’s Ruins of the Palace of the Emperor Diocletian at Spalatro (1764) but the publication contained no acknowledgement of his work.

Clérisseau later returned to Paris, where he attracted the attention of young neoclassical architects and provided classical decoration designs for enthusiasts who hadn’t, or were unable to, visit Rome themselves.

In the Museum’s collection we have a set of wall panels, both designed and painted by Clérisseau, that almost certainly originally formed the main decoration of the Salon there. A selection of these panels will allow Clérisseau to have a direct presence in our new galleries (and yes, his name will be included on the gallery label!).

The whole set of panels illustrates the story of Achilles, with fourteen additional pilaster panels painted with acanthus scrolls. It was the first scheme in France to use the motifs of classical and Renaissance grotesques, which were to become a popular form of decoration in the 1780s and 1790s – arabesques, urns, tripods and distorted figures. Panels from the series have been selected for inclusion in our Neoclassicism display as they clearly demonstrate particular decorative fashions and also provide a good suggestion of an upper-class interior.