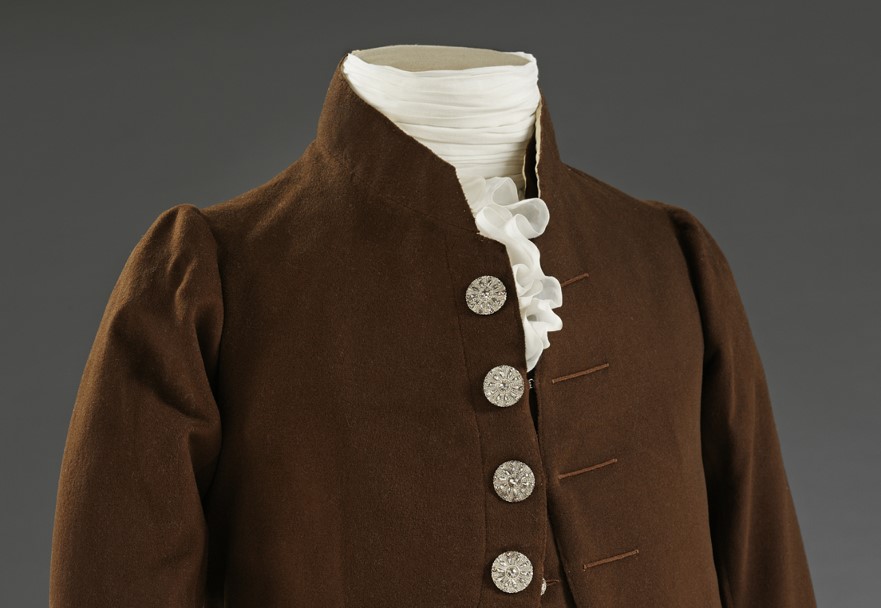 As well as illustrating a svelte figure, this wonderful brown suit also exemplifies staple day-wear fashions for the middle and upper classes in late 18th-century Europe.

Its slim-fit, noticeably snug across the upper-body, and the height of the coat collar attest to the owner’s fashionable taste. The breeches reach over the knees and are a tighter fit than those found in earlier decades.

In France, this period saw men’s day-wear fashions become less garish and more stable than in previous decades. The middle and upper-classes use of wool clothing for different levels of formality increased. This was accompanied by a move away from bright colours, with coats becoming limited to browns, greys, dark-greens, blues and black. The brown suit, with its pale-cream silk lining, epitomises these more sombre sartorial tendancies which were influenced by the trends of ‘Anglomania’.

Anglomania was a term used to describe the adoption of English fashions by the upper sections of European society. This fascination and enthusiasm for all things English was particularly strong in France. Originating in the 1750s, it reached a peak in the years preceding the French Revolution.

‘Our opinions, our fashions, even our games, were adopted in France; a ray of national glory illuminated each individual and every Englishman was supposed to be born a patriot and a philosopher’ wrote Edward Gibbon, English historian and Member of Parliament (1763).

French women adopted the robe à l’Anglaise, which consisted of an open robe with a bodice cut in one piece. The skirt parted in front to reveal a matching petticoat. Its fitted bodice did not have the centre back pleats that characterised the Robe à la Française, but was cut and seamed.

The fashion for horse racing was popularised by the Duc d’Orléans and the Comte d’Artois who imported horses and jockeys from England. Public races were organised at Vincennes. The Duc d’Orléans made frequents trips to England, he was a member of various English clubs and from 1782 he rented a permanent residence in London.

Characteristaically English designs were also taken up in French furniture production. The small mechanical music-stand and writing-table, shown below, was made in the workshop of Martin Carlin, Paris, ca.1777-85 but was based on an English design from the 1720s.

Dear Dawn Hoskin, I very much enjoy reading your blogs. I do hope you will continue to write them for a long time!
I wonder what the reason for this Anglimania was?
Thanks again,
Mina

To briefly answer your query about the ‘reason’ for Anglomania:
There were a number of factors that helped to influence and prompt the development of ‘Anglomania’, especially in France.

Notably, the English political system was of considerable interest to French thinkers – after the 1688 Revolution (the overthrow of King James II of England) it differed from the French system and provided an interesting subject against which to discuss various Enlightenment ideas and ideals.

Although ‘Anglomania’ appears more visually apparent around the 1750s, I would say that it would have been greatly influenced by the writings of Montesquieu and Voltaire in the preceding years. Publications such as Voltaire’s ‘Lettres sur les Anglais’ (1733-34) helped to introduce and foster a wider interest in English politics and culture.

Increased travel between England/Britain and other European countries.

Increasing circulation of publications (including works by writers such as Jonathan Swift).

The high standard (and subsequent admiration) of certain English industries, for example the cut-steel being produced in Birmingham, Sheffield and London.