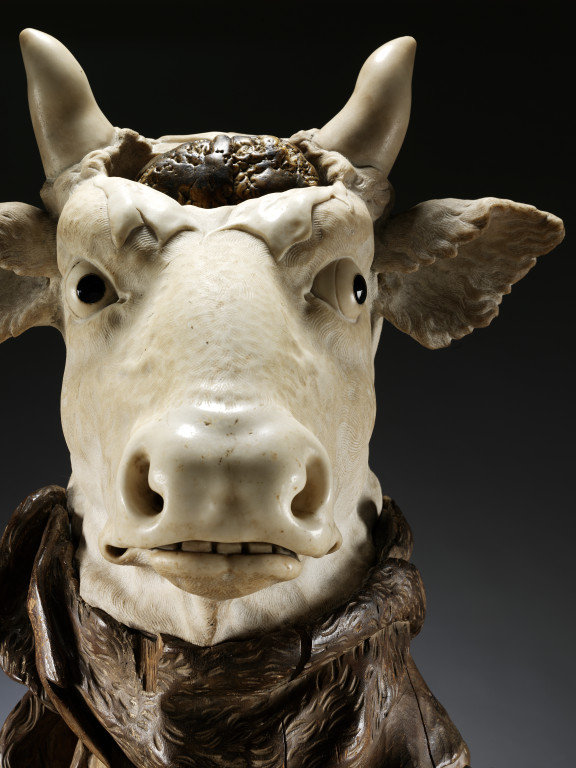 Today’s post is simply to express my glee at seeing new photographs of what will be one the galleries’ more unusual inhabitants.

This late 17th-century sculpture depicts the head of an ox, in white marble, resting on a section of a tree trunk that was carved from a number of pieces of wood. The skull of the ox is shown opened up to reveal a mysterious ‘growth’ of some kind. Rather melodramatically, the ox’s own flayed hide (also carved from wood) is wrapped around the trunk, complete with hooves and tail.

Elaborately carved, this strange assemblage combines artistic skill with a fascination for nature and scientific curiosity. By making the sculpture from a combination of marble and wood, the sculptor demonstrates his carving abilities and mastery of both materials.

Its theatricality is typical of the 17th-century fascination with  naturally occurring oddities and would no doubt have provided a dramatic talking point. Acquired in Venice in 1882, it was then believed to have come from a  collection of curiosities assembled in the Villa Altichiero in Padua, although there is no firm documentary evidence to confirm this.

Some of you may remember seeing a glimpse of the ox (sporting some fetching paper ‘ear-muffs’) in this post I wrote about mock-ups back in 2013. As the photographs above testify, the ox has since been cleaned, treated and thoroughly investigated in our Sculpture Conservation studios.

Despite its unusual appearance, when previously on display, the ox evidently appeared friendly enough to some visitors that they insisted on petting it. The photographs below provide a good demonstration of how touching objects can very visibly mark and damage their surface.  The rather muddy-looking marks you can see on the right are the result of people touching the white marble.

The conservators found that these handling marks had combined with old layers of bees wax. They were able to remove a layer of the wax which, as you can see, had quite startling results.  Needless to say, when you next get to see it in the new galleries please don’t touch!

Standing at over 1.5 metres tall, it was obvious that the sculpture is rather top-heavy. Separating the head from the trunk allowed us to find out that the head weighs an impressive 74.2 kg. It appears that there was originally not much to support to keep the head on the trunk. To ensure that it will be safe and secure for re-display, the conservators and technicians will be attaching an armature onto it to stabilise it.

And finally so to that puzzling ‘lump’ that’s been staring up at us out of the top of the ox’s head! This apparent raison d’être for the sculpture is held within an oval cavity in the life-size head, where flaps of skin are peeled back to reveal a ‘stone’ with markings.

The mysterious form was originally thought to have been a fossilised or petrified ox brain. This suggestion probably results from an event in Padua in 1670, when a hardened mass of bone was discovered inside a slaughtered ox and was believed to be the animal’s petrified brain. It was declared a medical marvel by Sebastiano Scarabicci, a lecturer in medicine at the University of Padua, who published and delivered a number of lectures about it. 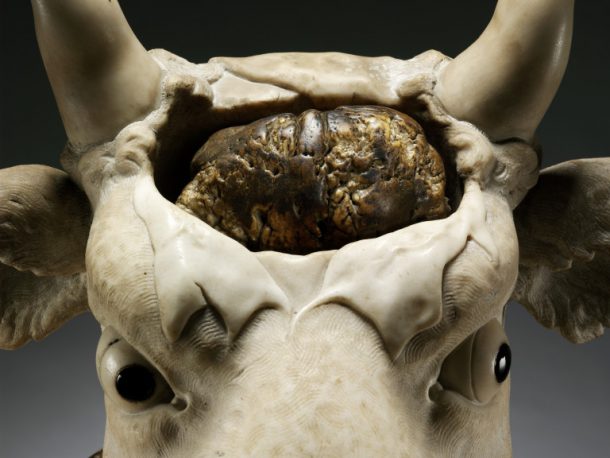 Ever since the ox entered the Museum, questions and suggestions have surrounded the ‘growth’. It was generally agreed that it could not be a petrified brain but was instead probably a large osteoma – a new piece of bone growing on another (typically a skull). In 1933, the Natural History Museum confirmed that it was organic and likely to be a piece of diseased bone from a large mammal, such as an elephant or whale.

Being called upon to work on the ox in preparation for the new Europe Galleries, provided the conservators with a perfect opportunity to explore this mystery a bit more. A mammal specialist from the Natural History Museum was invited to examine the ‘growth’. He was very excited by it and said that in his opinion it could be one of two things: a stomach calculus or a large dental anomaly. The conservators have since been in conversation with the Royal College of Surgeons, however, the quest to solve this baffling bovine mystery still continues …

“… the quest … still continues …” May I suggest that a radiological nuclide analysis might solve the mystery in a few days given modern atomic spectrometry etc. – it might even tell us, not only which animal was growing the “growth” (if true), but even where it lived and maybe even when as most regions have a nuclide fingerprint that sets them apart.