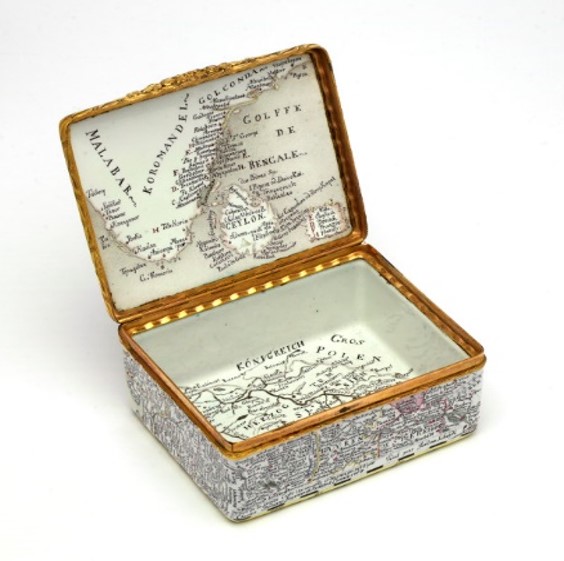 The Treaty was made between the kingdoms of Great Britain, France and Spain, with Portugal in agreement, following Britain’s victory over France and Spain during the Seven Years’ War.

This enamelled copper snuffbox is an example of political propaganda produced during the Seven Years’ War (1756-63), with the major areas of the conflict in central Europe mapped on the outside.

The Seven Years War (1756-63) was triggered by the disputed sovereignty of Silesia, which is depicted on a map on the base inside the box.

The duchy of Silesia had become Prussian territory during the War of the Austrian Succession (1740-48) when King Frederick the Great of Prussia (1712-86) defeated Empress Maria Theresa of Austria.

All major European powers of the time became involved:  Prussia, Great Britain and Hanover opposed Austria and its main allies, France, Russia, Sweden and Spain. Colonial interests outside Europe led to an escalation of the war into what might be considered the first global conflict.

The cover, walls, base and interior of the snuffbox are painted with maps of Dresden and Saxony, Poland, Hungary, Austria, Bavaria, from Lake Constance to the Netherlands and along the coast of Denmark to the Baltic.

One side of the box is inscribed with the names of Charles Beduzzi and Jordan Scheydl. 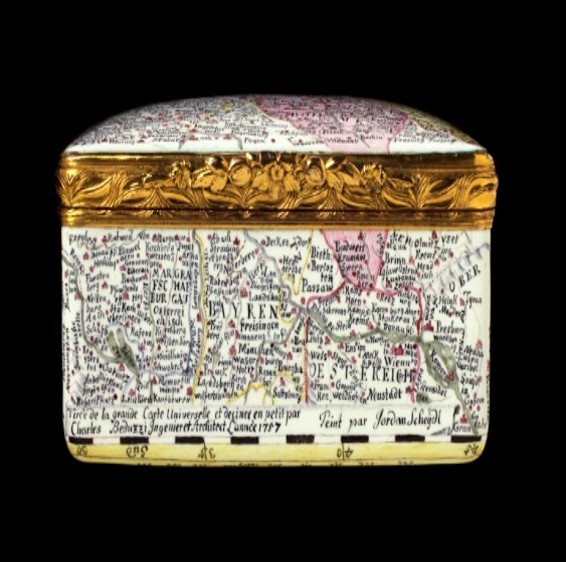 The box appears to be a souvenir celebrating Prussian supremacy and the successful campaigns of 1757, when the Prussian Army won two important battles at Rossbach (Germany) and Leuthen (present day Poland). It was possibly made in Berlin, which was a centre of the production of enamel boxes.

The Museum holds another (double) snuffbox with similar decoration, which also thought to have been made in Berlin. The maps decorating this box detail the geographical situation at the second year of the Seven Year’s War struggle for territory between Prussia and Austria.

Both of these boxes are part of the Gilbert Collection – one of the world’s great decorative art collections, formed by Sir Arthur Gilbert (1913-2001) and his wife Rosalinde (1913-1995). The collection is on long-term loan to the V&A and the rectangular snuffbox will feature in the new Europe Galleries.

The maps painted on the boxes are not only an example of political propaganda but also demonstrate the 18th century trend for decorating snuffboxes with the appearance of other everyday objects, such as letters.

This aspect of the box will be explored further in the Europe Galleries, where it will form part of a display about ‘Accessories’. This display is concerned with the 18th century popularity for accessories such as fans, swords, handkerchiefs and snuffboxes – their use as conversation pieces; a means of non-verbal communication; and also their role as diplomatic gifts and tokens of friendship or love.

What fabulous pieces of craftsmanship! I have always been a fan of vesta cases, have yet to seen any with such map detailing as the above. I can imagine when smoking was at its peak that these items were considered a must, especially for the gents.