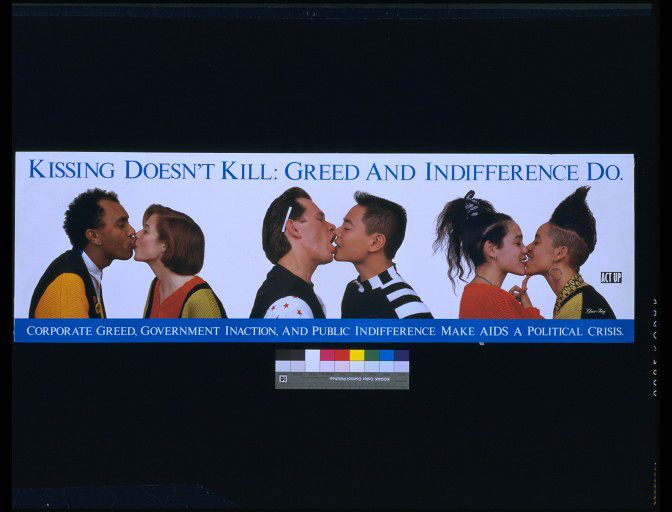 When Covid-19 was first classified as a pandemic, there was a significant uptick in interest for pandemics and plagues of the past. Fiction books such as Albert Camus’ The Plague and Gabriel Garcia Marquez’ Love in the Time of Cholera experienced a massive resurgence in sales, while John Barry’s 2004 historical account The Great Influenza shot up to the top of the New York Times bestseller’s list in April 2020, and remained there for several weeks. There was hope that we could learn from these past events, resulting often in somewhat dubious think pieces. Yet, while the Spanish Flu gets repeat attention in our search to find clues, ideas, and references for how to manage our current crisis, the only other global pandemic that still currently exists has received scant attention: HIV/AIDS.

While the epidemiological nature of Covid-19 and HIV/AIDS are different – explaining in part our preference to reference influenza outbreaks instead – the contemporaneity and global reach of HIV/AIDS provides many useful touch points for thinking about our current problems. Which is all the more frustrating, as despite these obvious overlaps, the continued marginalisation of HIV as an important case study, speaks to the longer historic and tragic marginalisation of the disease itself.

Fortunately, the V&A has a rich and substantial collection of print material related to the topic that we can draw from. It’s the result of an urgent show put together by curator Shaun Cole in 1996 at the museum called ‘Graphic Responses to AIDS’. The show was particularly brave at the time because of the depiction of gay men and gay culture which risked being accused of breaching Section 28 of the Local Government Act, introduced in 1988 banning local authorities from ‘promoting homosexuality’. (The law was only repealed in 2003) It was also brave in that HIV/AIDS was still an uncomfortable topic for many who might prefer an outing to the museum as a form of luxurious escapism rather than a confrontation with a painful present.

Cole collected more than 100 works for the exhibition with the intention of showing how a discipline like graphic design could play an important role in the larger battle against the disease. Looking at these works now, one can feel many echoes of our own time in the challenges and issues they address, but also clues as to how graphic design can and should be responding to Covid-19 today. Below is a cursory attempt to draw some comparisons and observations:

Blaming and shaming have prevailed during this pandemic. A nasty tendency is to place the blame on China, with derogatory and racist terms like the ‘China virus’ or ‘Wuhan flu’ being used by unscrupulous people. With HIV/AIDs, the blame was violently targeted at the gay community, giving people false moral license to turn a blind eye to the disease. Posters like these try to correct this wrong by saying what is true of most diseases – that a virus does not discriminate, even if people do.

With any novel virus, one of the biggest dangers is the amount of misinformation that can circulate and the consequence of those false ideas. With HIV/AIDS one of the worst misunderstandings was in how the disease was transmitted, with people worried that a passing touch or a kiss on the cheek could mean a lifelong infection. Poster campaigns like the ones below were essential in reminding people what was safe and what the real risks were. We see similar problems taking place with Covid-19, where competing sets of alternative facts shape people’s attitudes and behaviours around face masks, social distancing and vaccines.

Perhaps graphic design’s biggest role in the HIV/AIDS epidemic was in circulating vital information for how to prevent the spread of the disease. Information pamphlets and posters urged people to practice safe sex and to use clean needles, often using humour and visual puns borrowed from the advertising world to catch the viewer’s attention. Similarly, today we seen national campaigns urging prevention techniques like hand cleansing, face mask wearing and social distancing, and a host of more humorous and witty graphic responses taking on and challenging the sceptics.

How to get the message out there, and the medium and format one chooses are just as important as the message itself. Aside from the more typical poster format, there are a few examples in the Graphic Responses to AIDS show of alternative outputs, such as this set of ‘Awareness Cards’, distributed in packs of twelve along with a condom, each card featuring someone whose life had been affected by the disease.

Today, you could argue, much of the messaging has moved from print to digital and from static to moving image, as TikTok, YouTube and other social media platforms have become wildly popular formats for broadcasting ideas, criticism and satire around the pandemic. That hasn’t discouraged analog outputs either, with a flourishing of DIY and homemade signs posted in peoples windows and out on city streets.

Many of the posters in the exhibition try to overcome the incredible stigma cast on people living with HIV/AIDS by creating a sense of empathy. An image of two men embracing with the phrase ‘My boyfriend is HIV positive, I love him’, or the image of a boy accompanied by a text which foretells the suffering he will endure growing up simply because of his sexuality, both deploy the powerful tool of allegory and portraiture to create this human connection.

What does empathy look like today? There have been some exceptional moments of unity and an outpouring – if symbolic – of support for the NHS and key workers through rainbow signs and Thursday evening clapping. Yet one can also notice a creeping ambivalence to the numbers of people getting sick and dying as the numbers themselves become more abstract and removed from the stories of the individuals effected. This is something touched on here, on the power of lists and the New York Times editorial that eulogized the first 100,000 deaths in America.

From a collecting perspective, one of the most impressive things about Graphic Responses to AIDS was its geographical breadth. Shaun Cole was able to bring together work not just from Britain but from the USA, Denmark, Germany, Uganda, Canada, Kenya, Italy, South Africa, Nicaragua, and more. What we know from our current pandemic is that while the disease remains the same, the local circumstances and challenges vary from one place to another. Looking at these posters, we get a sense of those different challenges playing out based on the stories the works choose to tell.

Above all, Graphic Responses to AIDS reminds us of the incredible importance of collecting objects that reflect on and have borne witness to historical challenges and crises. Museum collections are not just created so that we can revere beautiful objects and famed artists of the past, but so that we can better understand the role objects play and have played in mediating society and our own everyday life – even in the face of a pandemic.