Mermaids, Mermen and other fantastical creatures of the sea have featured heavily in our folklore for centuries. The first stories of mermaids appeared in Assyria in about 1000 BC. One of these earliest legends describes how the goddess Atargatis, mother of the Assyrian queen Semiramis, unintentionally killed the mortal shepherd whom she loved. Distraught, she jumped into a lake to take the form of a fish. However the water failed to completely cover her beauty; only transforming her into a fish-like form from the waist down.

The swirling tail and foliage, along with the figure of the two tailed mermaid and Eros, draw from classical models of ancient Rome.

Stories often develop similar themes of metamorphosis by showing a mermaid’s interest in humans. Perhaps one of the most famous children’s fairytales, ‘The Little Mermaid’, by Hans Christian Andersen, tells of a mermaid falling in love with a mortal prince that she saves from drowning. 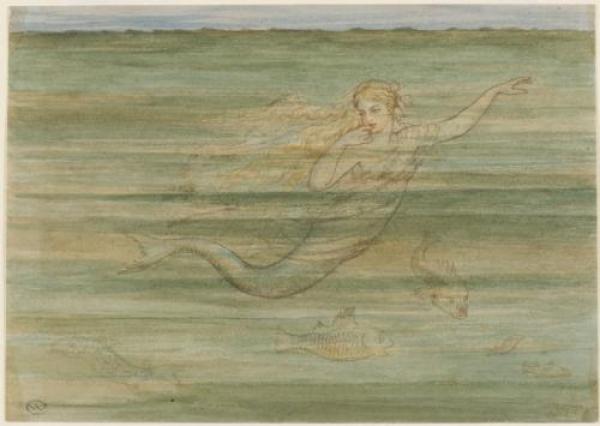 This watercolour shows the mermaid making her first journey to the world above the waves, where she will meet and fall in love with a human prince.

Not just topics for folklore, Merfolk, or mermaids, mermen and other sea creatures, have been a popular ornamental motif for centuries. They can be found on a wide variety of objects in the collections of the Victoria and Albert Museum.

During the Renaissance artists looked to the culture and artistic heritage of ancient Greece and Rome. With merfolk featuring in the mythology of these past cultures it is no surprise that they soon became incorporated as motifs in the decorative arts.

The sea god, placed in the centre of the roundel, can be identified by the trident that he carries. The external border consists of mermen, Nereids (sea nymphs), putti and sea horses. 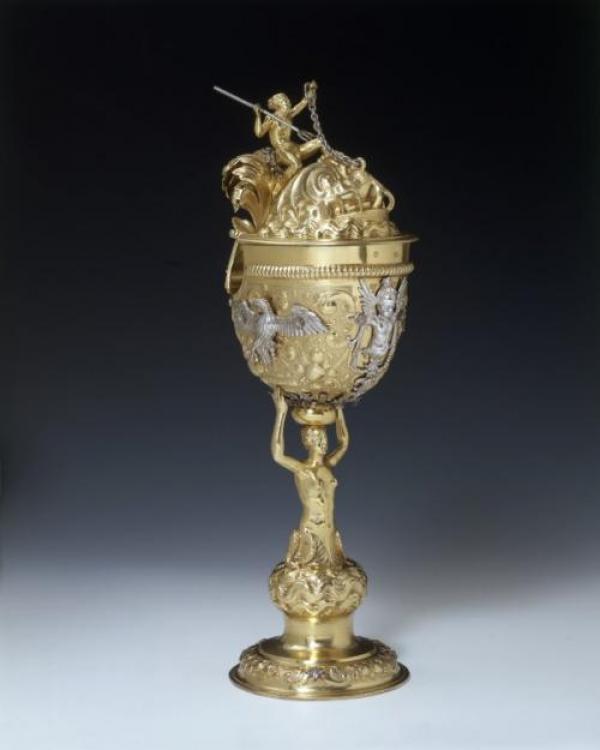 Standing cup in the shape of a nautilus shell presided over by Neptune riding his chariot with a stem in the form of a mermaid, made by Paul Aettinger,  Regensburg, about 1590.

Like Gheyn’s print, this standing cup uses the classical motifs and figures associated with the kingdom of the sea.

Adriaen Collaert, design for a plate or cup with Amphitrite or Thetis, c. 1600.

Produced within twenty years of de Gheyn’s print (plate 3, V&A inventory number; 16377), Collaert was also inspired by the kingdom of the sea for this print from a suite of four circular designs for plates of cups.

The central figure is believed to represent either Amphitrite, the consort of Poseidon in Greek mythology, or Thetis, who was one of the 50 Nereids, is the mother of the warrior Achilles.

This print is from a suite of 12 candelabra, or vertical panels, of grotesque decoration. These prints incorporate motifs inspired by decorative schemes of ancient Rome. At the bottom of the candelabra is a figure of a siren or mermaid embracing two children. 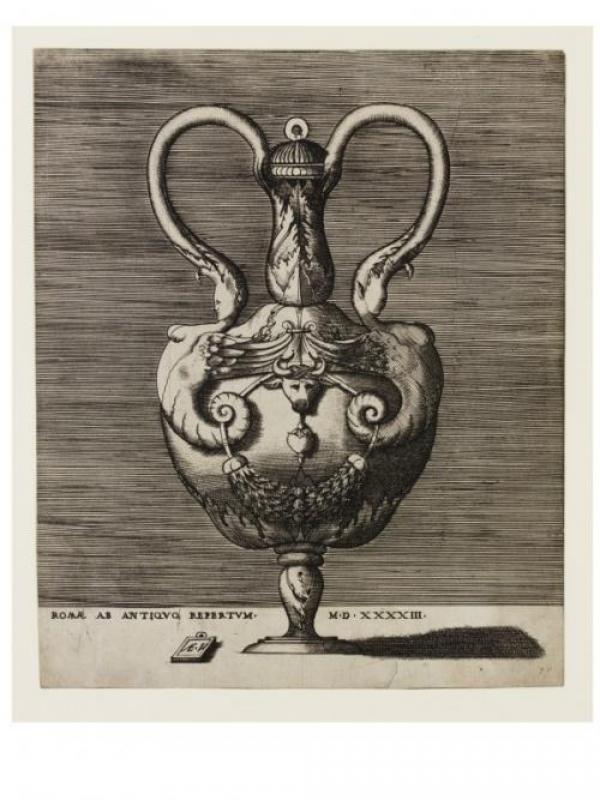 Here the sinuous handles of this vase are in the form of Mermaids, whose fish tails adorn the body of the vase. 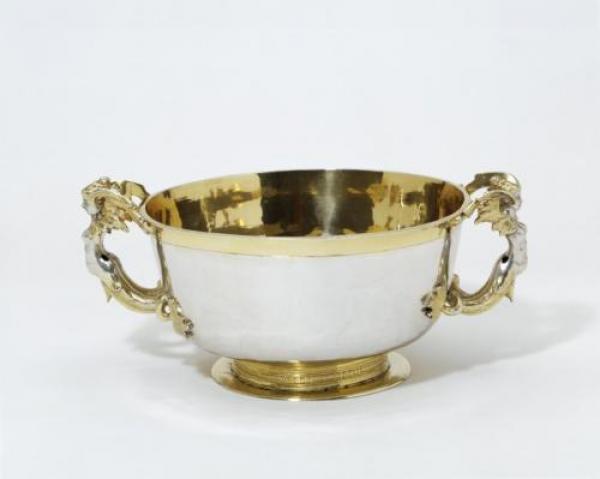 In this bowl Franz von Dort incorporates handles in the form of mermaids similar to those of Vico’s design for a vase (plate 5).

European legend often portrays mermaids as dangerous creatures. It was believed that sighting mermaids signified an approaching storm. Similarly it was thought that like the enchanting music of sea dwelling Sirens, the beauty of mermaids could lure men to a watery grave. It is perhaps their legendary beauty that made them such ideal subjects to adorn so many different objects; from plates and jewellery designs to cane tops and even roof finials: 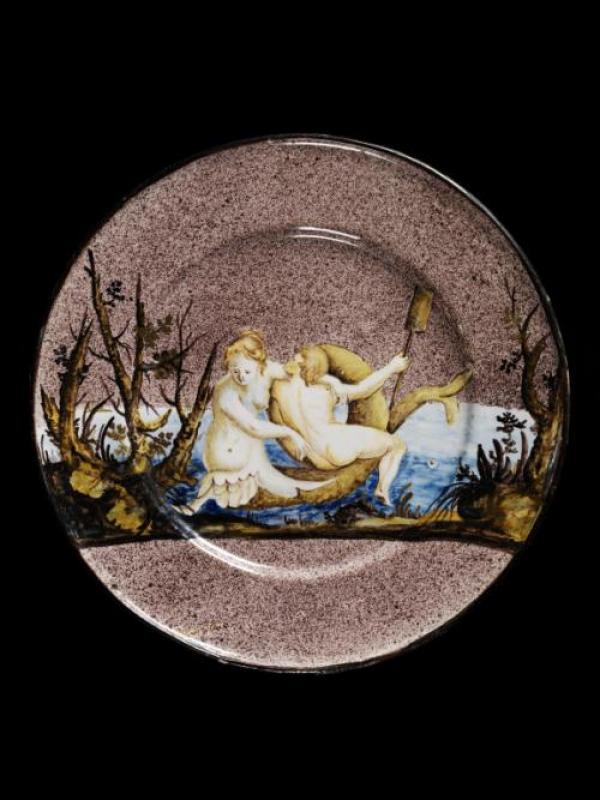 Plate depicting a triton and a mermaid between tree- stumps, possibly made in Siena, about 1740-1750. 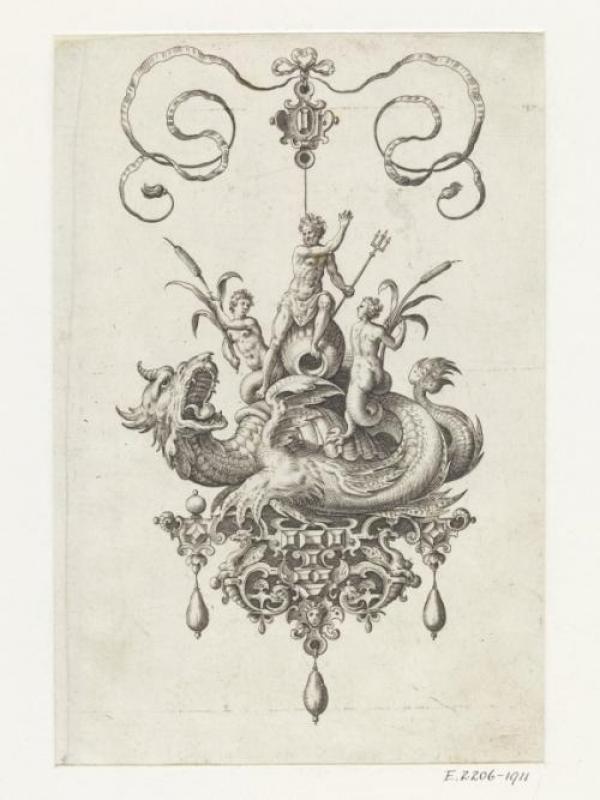 Hans Collaert (after), plate from a suite of ten designs for jewellery in the shape of sea creatures. Flemish, 1582. 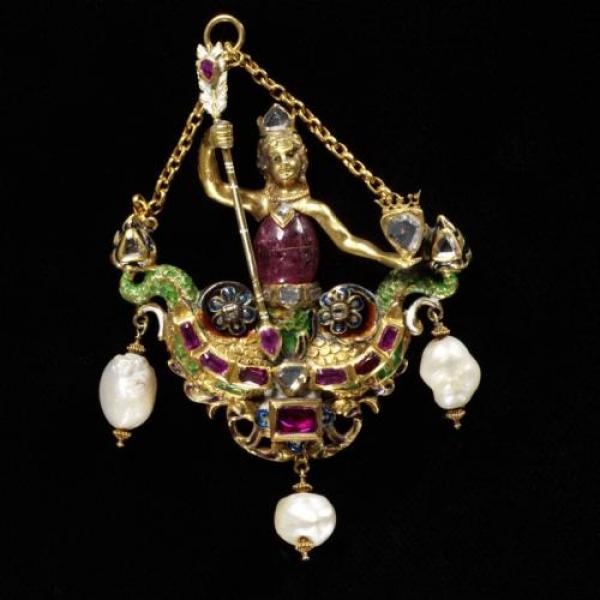 Pendant in the form of a double-tailed mermaid, enamelled  gold set with diamonds, pink tourmaline and rubies and  hung with pearls, probably Austriaor Hungary, 1850-1900.

This pendant is in a Renaissance revival style, following earlier designs such as those by Hans Collaert. 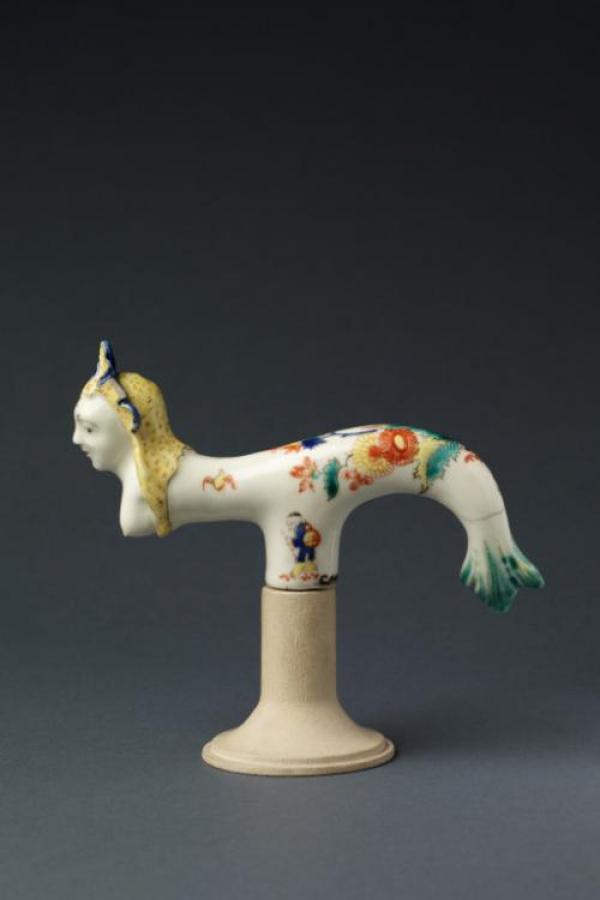 Porcelain cane handle in the form of a mermaid, Saint- Cloud porcelain factory, France, about 1730-1740. 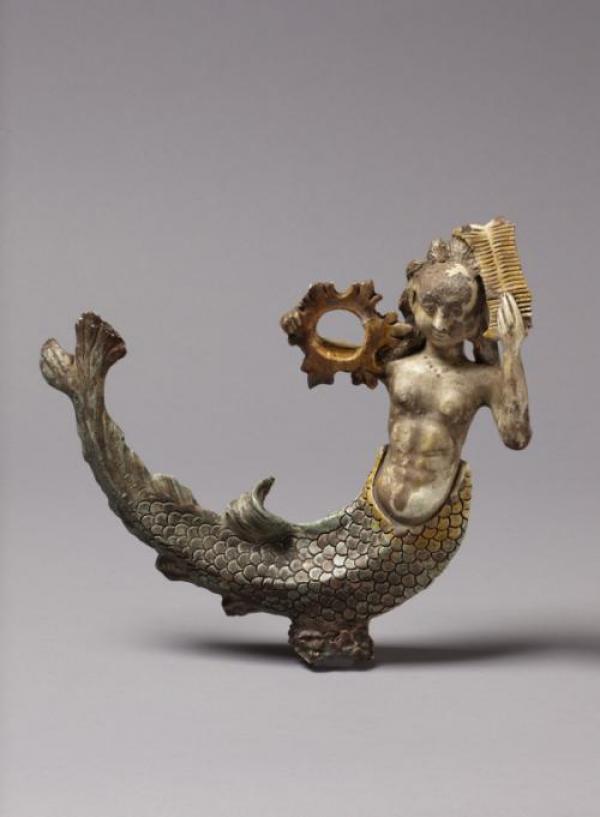 In recent years mermaids have entered our culture through various media. The Hans Anderson fairytale was made into an animated film by Disney in 1989 whilst the romantic comedy ‘Splash’ (1984) and teen comedy ‘Aquamarine’ (2006) consider mermaids in present day settings. Mermaids have also entered pop music culture. In 2011 Lady Gaga dressed as a mermaid for the video of ‘You and I’. Mermaids also continue to feature in our daily routine through their use in logos; just think of the Starbucks logo next time you are craving a cup of coffee.

I’m happy i finally got the right spell caster that gave me the powerful magic ring that can turn me into real fish beautiful mermaid tail any time i want to. I just say a word to the ring and i poses a real tail and do not have to wear a plastic tail to look like one. Here is the real mermaid and merman spell contact: joinmermaidfamily @ gmail . com