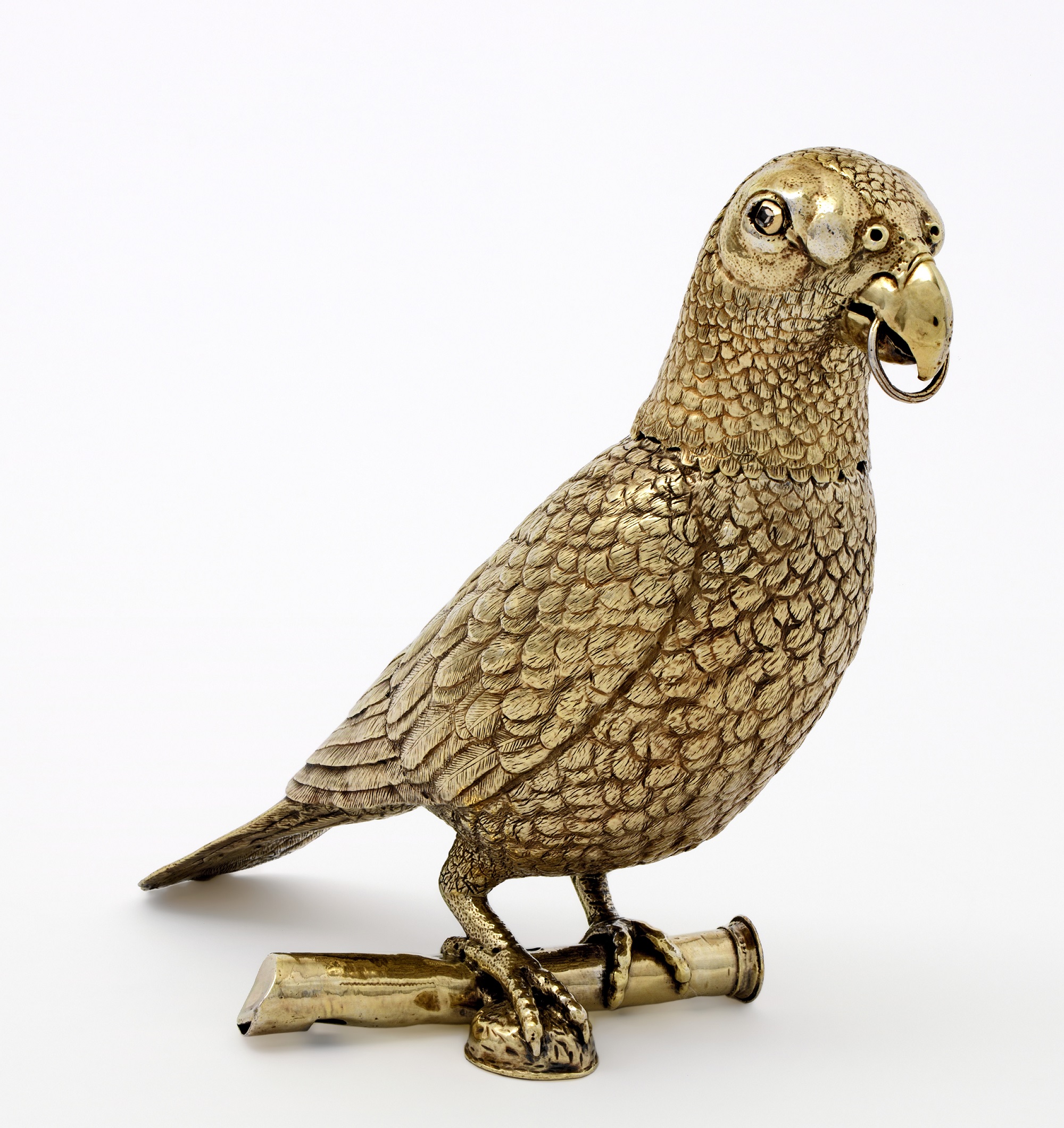 This week my colleagues and I installed some extraordinarily beautiful, dazzling, precious pieces from the Gilbert Collection of silver in the V&A Whiteley Silver Galleries as part of the display Personal Favourites: Gold and Silver from the Rosalinde and Arthur Gilbert Collection.

While installation was in full flow, a mother walked along the gallery with her little daughter who was just tall enough to glance at some particularly endearing pieces at eye level. She was completely mesmerised by what she had in front of her eyes and hardly moved for quite a while (which in a young human is almost worrying).

There is the sleeping dog, curled up on a silver bowl since the late fifteenth century.

There is a ship, manned and gunned, and even with a monkey sitting on the roof of a hut on the main deck of the ship. (On sight of this the little girl clapped her hands and shrieked with delight!)

There is also a falcon with a body of carved coconut.

And there is a cheeky parrot, glancing at the visitor through his diamond eye almost as if alive.

Our young visitor wanted to know everything about the birds: silver wings that flap and feathers of mother-of-pearl, an eagle’s head attached to a nautilus shell. The world of precious silver is full of surprises of this kind.

‘Why is the bird looking in this direction?’ she asked. The truth is, because this is what we decided he (or she?) should do. And here is the story behind this decision:

Vessels like the Gilbert parrot, which was made in the German town of Emden around 1620, were so-called welcome cups. They were used for toasting and welcoming guests. The Gilbert parrot stands on a whistle which might have been part of a drinking game. His right foot also clutches half a walnut, typical parrot food.

Birds were a popular choice for such cups, but welcome cups were also produced in the shape of boars, stags, and even as miniature versions of the castle for which they were made. A parrot, though an unusual sight in northern Germany in the seventeenth century, would have been a popular pet among the elite and revered for its ability to learn simple sentences. Parrots were shown in many contexts, for example, a parrot takes centre stage in a depiction of the sense of touch, which alludes to the bird’s bad habit of biting his unsuspecting owners.  Parrots also appear in still lifes; one of them even appears to ‘gate-crash’ Rubens’s painting Holy Family with Parrot.

Our young visitor’s question is quite important because the diamond-set head of the parrot serves as a lid and can be taken off. It fits beautifully regardless to what direction the head looks. The way in which the head sits on the body changes the expression of the parrot from restless and on the move to still. We settled for a slight look to the right out of the case, not unlike a portrait of a prince or statesman. The Gilberts’ parrot now awaits you in case 1 of room 66 with an expression that, in my opinion, resembles restrained excitement.

I share this sentiment, and thoroughly enjoyed creating this show for you with my colleagues. In the process, which started nearly a year ago, many details caught my eye. There are pirates, parrots, and many other delightful details to be discovered. I look forward to sharing my observations with you over the duration of the display.

Do come and join my colleagues and me for one of the following events around the display Personal Favourites: Gold and Silver from the Rosalinde and Arthur Gilbert Collection:

Lunchtime lecture 3 December 2012, 1pm: A sleeping dog from Venice: the meaning of a Personal Favourite from the Gilbert Collection

Clearly all of these show the signs of a period long gone: when rich noblem”men” would sponsor artists or get certain works commissioned for whatever reason and then gave them often almost free hand to spend “whatever it takes” to come as close as possible to an ideal that only they “knew how”. In our “modern” times of equality, even if we now have some billionaires with spending power far beyond probably most ancient kings, all orders now seem to follow some principle of utility because that’s how you become a billionaire in the first place … Keep preserving these witnesses of times that will probably never be again. While I am certainly no royalist, just think of the outcries if the Queen of England commissioned some of these works out of the public purse!