NVAP screening of The Father 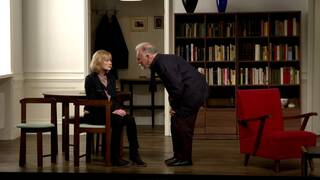 Join us for a free screening of The Father, written by Florian Zeller and translated by Christopher Hampton. This production was directed by James Macdonald, and recorded live by the V&A at the Tricycle Theatre, June 2015.

This award-winning play, recently adapted into a film, movingly explores the experience of dementia through an older French man, Andre, twisting memories into the present onstage. The screening will have no intervals. The production is 87 minutes long. All screenings in the programme are drop in and are on a first come, first served basis. Please be advised, screenings may contain explicit language and content. Our full list of NVAP recordings can be found on the Archives page.