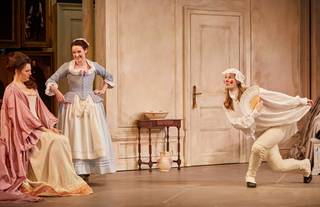 It is the wedding day of Figaro and Susanna, but will their marriage ceremony ever take place? During the course of a crazy day a series of confusing events unfolds. Count Almaviva has lost interest in his wife and is intent on seducing Susanna. She and Figaro conspire with the Countess to outwit him and to teach him a lesson in fidelity but his young page, Cherubino, inadvertently upsets the carefully laid plans, and relationships are severely tested. All of this is brought to life by Mozart’s music of consummate grace, wit and joyous invention, with Da Ponte’s sparklingly adroit libretto.

This re-creation of John Cox’s much admired 2005 production is conducted by Garsington Opera’s Artistic Director, Douglas Boyd, and designer Robert Perdziola adapts his elegant 18th century designs for the Wormsley stage. The cast includes Joshua Bloom (Leporello, Don Giovanni, 2012) as Figaro and Jennifer France (Marzelline in Fidelio, 2014) as Susanna, with the baritone Duncan Rock and Canadian soprano Kirsten MacKinnon making their Garsington debuts as the Count and Countess.

“I have never known a Figaro like Joshua Bloom’s.” – The Independent