The Homecoming Aria from the opera The Golden Dragon by Peter Eötvös, based on the play by Roland Schimmelpfennig, performed by Llio Evans (Soprano) and Geoffrey Paterson (Piano) 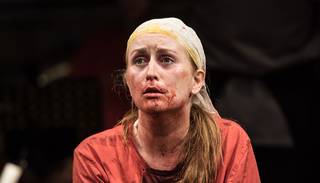 Before the Homecoming Aria is performed, an invited panel will discuss some of the issues raised, from universal stories of migration and vulnerability to current concerns around diversity in opera.

Migration, exploitation, hopes and lost dreams are at the heart of The Golden Dragon, a compelling fable of modern life – funny, shocking and touching in equal measure.

Music Theatre Wales’s production of the opera made a powerful impact on audiences who saw it, but at the same time, it provoked significant discussion over its casting of non-Asian singers. Composed by Peter Eötvös and based on the play by Roland Schimmelpfennig, this startling new opera is set in and around an Asian restaurant somewhere in the western world. In the Music Theatre Wales production an all-white cast played numerous roles, including a variety of Chinese characters, and this raised important questions about the creation and performance of opera in contemporary Britain.
Join Music Theatre Wales as they discuss the creation and impact of their new production and perform the Homecoming aria - the emotional climax of this startling new opera – live at the V&A.