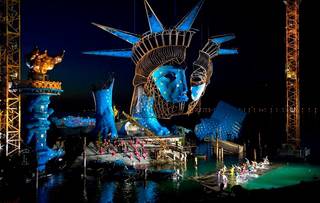 Paul Brown worked as the designer on productions around the world, from the Royal Court and Glyndebourne, to La Scala in Milan and the Lake stage at Bregenz Festival. Join designer and curator Kate Burnett along with Paul’s team of assistant designers and model makers to explore Paul’s work and examine the craft and vision involved in preparing scaled set models and costume and technical drawings for realisation on stages and screens worldwide. There will also be the opportunity to experience a VR version of Paul’s studio created by film maker Jonathan Hamilton.

Join today
Background image: Photo by Karl Forster
We use cookies to enhance your experience on V&A websites. Read our cookie policy to find out more.